US of A Government at Work

Biden Social Spending Bill Whittled Down To $10 Billion Check To Joe Manchin. WASHINGTON—At last striking a compromise that unites all 50 Democrats in the Senate, the White House announced Wednesday that it had enough votes to pass a streamlined version of President Joe Biden’s social spending bill that had been stripped of every provision except for a $10 billion check for Sen. 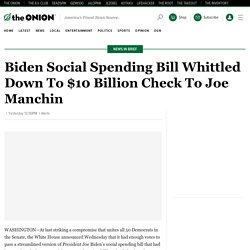 Joe Manchin (D-WV). “While we didn’t get everything we wanted, the important thing is that we reached an agreement that represents this country’s largest-ever public investment in Joe Manchin,” said Biden, noting that he ran for president as a consensus candidate and that the revised legislation—which removes broadly popular sections of the bill including a clean energy program, paid family leave, and a tax on billionaires’ assets—apparently reflected Senate consensus.

The Truth About the JFK Assassination. The Merrick Garland Theory of Politics - by Jonathan V. Last - The Triad. PCLOB: The Essential Oversight Link Designed to Be Inadequate. Last year, there were a couple of measures that purported to respond to the problems with the Carter Page FISA application but which would not have helped him at all. 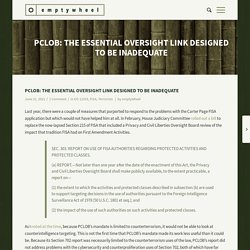 In February, House Judiciary Committee rolled out a bill to replace the now-lapsed Section 215 of FISA that included a Privacy and Civil Liberties Oversight Board review of the impact that tradition FISA had on First Amendment Activities. SEC. 303. REPORT ON USE OF FISA AUTHORITIES REGARDING PROTECTED ACTIVITIES AND PROTECTED CLASSES.

(UPDATED) Juneteenth Is Official. Gonna guess Possum Hollar ain’t down with it: Congress on Wednesday voted overwhelmingly to establish Juneteenth as a federal holiday, elevating the day marking the end of slavery in Texas to a national commemoration of emancipation amid a larger reckoning about America’s turbulent history with racism.It is the first new federal holiday created by Congress since 1983, when lawmakers voted to establish Martin Luther King Jr. 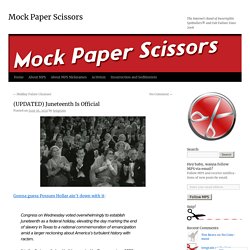 Day after a 15-year fight to commemorate the assassinated civil rights leader. Senate Passes $50 Billion Bill To Combat Chinese Influence By Developing Own Pandas. WASHINGTON—Securing a rare bipartisan consensus as both parties acknowledged the growing influence of the nation’s biggest geopolitical rival, the U.S. 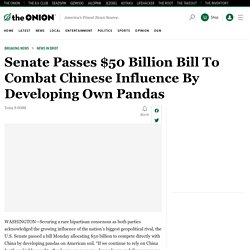 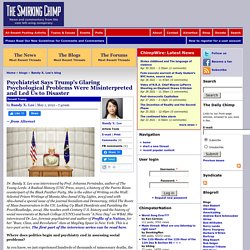 Bandy X. Postmaster General Announces Plan To Develop Property Occupied By USPS Mailboxes. We Can Do to the Senate What Brits Did to the House of Lords. The Cop-Out of “Follow the Science” — The New Atlantis. The coronavirus pandemic has been a disaster in nearly every respect. 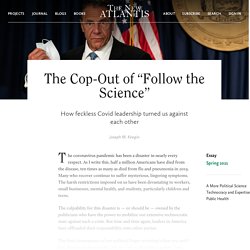 As I write this, half a million Americans have died from the disease, ten times as many as died from flu and pneumonia in 2019. Many who recover continue to suffer mysterious, lingering symptoms. The harsh restrictions imposed on us have been devastating to workers, small businesses, mental health, and students, particularly children and teens. The Politics of Sadism: How the National Trauma Inflicted by the Right Wing Endures. — from Alternet I don't mean to be a downer, by any stretch, but I feel strongly about this one thing. 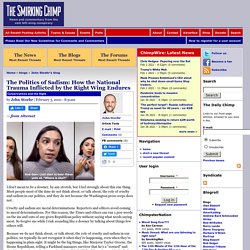 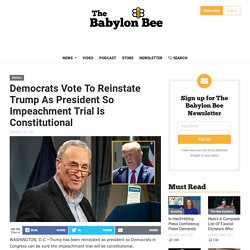 —Trump has been reinstated as president so Democrats in Congress can be sure the impeachment trial will be constitutional. Trump will resume serving as president effective immediately so that Democrats can vote on the article of impeachment filed against him. Kill Switch review: how the Senate filibuster props up Republican power. For nearly a month, Mitch McConnell and his Senate Republicans have waged the parliamentary equivalent of a guerrilla war. 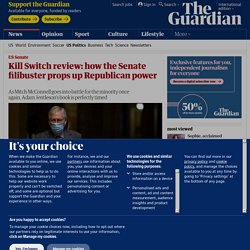 Having lost the Georgia runoffs and with them the Senate, McConnell has still managed to stymie formal reorganization of the chamber. In an already sulfurous political landscape, the filibuster – the need for super-majorities of 60 votes to pass legislation – looms once again as a flashpoint. The Boot Is Coming Down Hard And Fast. A lot’s been happening really fast. 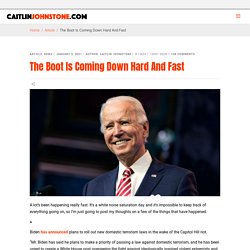 It’s a white noise saturation day and it’s impossible to keep track of everything going on, so I’m just going to post my thoughts on a few of the things that have happened. Biden has announced plans to roll out new domestic terrorism laws in the wake of the Capitol Hill riot. “Mr. Biden has said he plans to make a priority of passing a law against domestic terrorism, and he has been urged to create a White House post overseeing the fight against ideologically inspired violent extremists and increasing funding to combat them,” Wall Street Journal reports.

Compare And Contrast: 1.7 Billion People Woke Up Today In Countries With Near Zero Virus. John Berman had on Dr. Ali Khan, dean of Nebraska Medical Center's College for Public Health, this morning to talk about the nearly 120,000 americans spending Christmas Eve in the hospital, and the 3,359 Americans reported dead from coronavirus overnight. "That hospitalization figure, as it hits new records every day, almost now at 120,000, why is it still going up? How is it that it continues to go up? New cases, there is some sign that it's leveling off a bit, but the fact that we keep filling up our hospitals at new unprecedented levels, it just keeps happening," Berman said. Republicans Rushing To Confirm 6 More Supreme Court Justices Before Election. WASHINGTON—Explaining that they were under a tight deadline, Senate Republicans told reporters Monday they were rushing to confirm six more Supreme Court justices before the election.

Death, Money, and the Dueling Frauds: Trump and Biden. Edward Curtin When The New York Times and CNN recently referred to the staged town hall spectacles of Biden and Trump as dueling events, they inadvertently revealed the truth that US presidential elections are America’s favorite movie and that the corporate media is in the entertainment business. While it is ludicrous to imagine these tottering actors crossing swords in tights, their skirmishes in suits and ties are good for a few laughs, if you have the stomach to watch them. Only people who still believe in professional wrestling would think these clowns don’t work for the same bosses – the Umbrella People, aka the power elites, the national security state, etc., who own the country and choose their stooges to represent their interests in the White House.

The new Trump attack on Biden accidentally revealed much worse info about Michael Flynn. Washington Gov. Jay Inslee is what real coronavirus leadership looks like. New York Governor Andrew Cuomo has long had an uneasy relationship with both the media and the overwhelmingly Democratic residents of his state. He has let the vital New York City subway fall into ruin, actively connived with Republicans to give them control of the state Senate, and generally been a thorn in the side of anyone who wants to do anything good. How America can get its economy back up and running as quickly as possible. For about a week, it seemed as though President Trump and the Republican Party were taking the novel coronavirus epidemic at least sort of seriously. Citizens United decision weathers 10 years of controversy. True Story Behind the 'The Report' Movie - Daniel J. Jones on CIA's Torture Program.

“We tortured some folks,” said the President of the United States in August of 2014, in what was meant to be the kind of Frank Admission a politician will sometimes offer on the weighty issues of the day. Why Have No Republicans Turned on Trump? There is a very simple reason why some Republicans voted for the impeachment proceedings against Richard Nixon, but none have so far broken ranks against Trump. That reason is a corrupted U.S. Supreme Court. Historian Jon Meacham: If you raise the bar on what’s impeachable, you lower the bar on acceptable behavior. Weak, Exhausted Nancy Pelosi Given Saline Drip Following Hours-Long Attempt To Stand Firm In Convictions. Speaker Nancy Pelosi approves impeachment inquiry into Trump: He ‘seriously violated the Constitution’ House Speaker Nancy Pelosi (D-CA) has announced that she is moving forward with “official impeachment inquiry.” ‘Every Senate Republican’: Chuck Schumer led unanimous vote to demand whistleblower report.

Donald Trump's Border Patrol dumps immigrants, city taxpayers get bill. When U.S. We’re FEC’ed In The Dark. ICE Just Quietly Opened Three New Detention Centers, Flouting Congress’ Limits. We need to get rid of Cyrus Vance Jr. Inside a Texas Building Where the Government Is Holding Immigrant Children. Martha Raddatz Grills Acting DHS Secretary After He Claims Not To Know About Mistreated Migrant Children. Alleged abuse by US border guards who forced detained migrant to wear humiliating sign around his neck reminiscent of Nazi camps – Raw Story. Border Patrol Agents Laugh At Rep. Tlaib And Others: As If 'This Is All So Very Funny' We're not even pretending to uphold the Hatch Act anymore. Perhaps someday we will. Democrats reportedly ready to offer Trump billions for "smart wall" — activists are outraged. Defiant Pelosi Begins Swimming To Afghanistan After Trump Denies Use Of Government Plane.

Government 'ignored the Constitution' when they let Trump have a hotel on federal property: inspector general. How to solve the juvenile delinquency problem in politics. Sen. Jeff Merkley On Wasted $5 Billion For Border Wall: 'That's 650,000 Children Attending Head Start' Defenseone. U.S. Senate Committee On The Budget. Here are 13 transformational bills in Congress that could completely change America as we know it.

Untitled. Splinternews. Trump ethics watchdog moves to allow anonymous gifts to legal defense funds. Log In - New York Times. This State Wants Protestors Prosecuted as Organized Criminals. Why is Government Subsidizing Junk Food? The Founding Fathers Did Not Want You To Vote. "A Dark Day for the People of Puerto Rico": U.S. Senate Moves to OK "Colonial Control Board" Congressional Hearing Goof Pulls Back The Curtain On How Washington Really Works. Nominee to Oversee Wall Street Works at Think Tank Dedicated to Blocking Regulation. Our political system is just this corrupt: Lawrence Lessig explodes our diseased, dangerous Congress. House Republicans Are Trying To Slip Bank Deregulation Into Highway Bill. I Want You Guys To See Something. Congress ready to ban 'pay for patriotism' salutes at sports events.