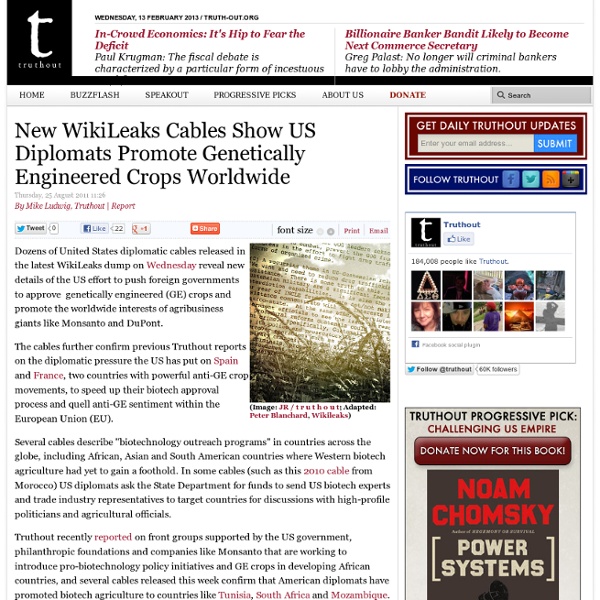 Dozens of United States diplomatic cables released in the latest WikiLeaks dump on Wednesday reveal new details of the US effort to push foreign governments to approve genetically engineered (GE) crops and promote the worldwide interests of agribusiness giants like Monsanto and DuPont. The cables further confirm previous Truthout reports on the diplomatic pressure the US has put on Spain and France, two countries with powerful anti-GE crop movements, to speed up their biotech approval process and quell anti-GE sentiment within the European Union (EU). Several cables describe "biotechnology outreach programs" in countries across the globe, including African, Asian and South American countries where Western biotech agriculture had yet to gain a foothold. Cables detail US efforts to influence the biotech policies of developed countries such as Egypt and Turkey, but France continues to stand out as a high-profile target.

Pentagon admits it has no photo evidence of Bin Laden's death (Includes interview) Pentagon officials recently disclosed to the Associated Press (AP) that they could not find any photo or video evidence to confirm that Al Qaeda leader Osama Bin Laden was killed in the Navy Seal raid in Pakistan a year ago. AP has submitted more than 20 requests for information surrounding the raid on Bin Laden’s Abbottabad compound to the U.S. Government under the Freedom of Information Act (FOIA). Read more... In addition, the Pentagon admitted that it could not find an autopsy report, death certificate or results of a DNA identification test for Bin Laden, in spite of claims made by President Obama and reported by CBC News that a DNA test was performed.

Wiki war: 3500 unpublished leaks destroyed forever as Assange hits out Former WikiLeaks staffer and one of the founders of OpenLeaks, Daniel Domscheit-Berg, holds his book Inside WikiLeaks. Photo: AP WikiLeaks founder Julian Assange's former right-hand man has irrevocably destroyed 3500 unpublished files leaked to the whistleblower site including the complete US no-fly list, five gigabytes of Bank of America documents and detailed information about 20 neo-Nazi groups. Daniel Domscheit-Berg, who left WikiLeaks last year after a falling out with Assange, revealed the document destruction in an interview with Der Spiegel. DDB spits on every courageous whistblower who leaked data if they destroy the keys and refuse to return it. WikiLeaks has hit back, accusing Domscheit-Berg of being in bed with US intelligence agencies and of jeopardising the leaking of “many issues of public importance, human rights abuses, mass telecommunications interception, banking and the planning of dozens of neo-nazi groups”. Advertisement “Mr.

the-amount-truth-rhetoric-politics US espionage investigation against WikiLeaks: PATRIOT Act order unsealed (on 2011-08-24) Further proof has emerged of the United States secret Grand Jury investigation into Julian Assange and WikiLeaks. Further information has been demanded on the organization and its founder for the US courts, this time under the PATRIOT Act. WikiLeaks have just received a copy of the recently unsealed court Order from the United States, signed by a US magistrate judge on the 4th of January 2011. The Order demands Dynadot handover the following information for the time period November 1st 2009 to present, within three days of the date of the Order: 1. Also: 1. records of user activity for any connections made to or from the Account 2. non-content information associated with the contents of any communication or file stored by or for the account(s), such as the source and destination email addresses and IP addresses. 3. WikiLeaks do not know what, if any, information Dynodot provided the US courts with. Help support WikiLeaks through these attacks. Send to Friend Print

The Raw Story | 'Karl Rove's IT guru' Mike Connell dies in plane crash 'Karl Rove's IT guru' Mike Connell dies in plane crash UPDATE AT THIS LINK: GOP consultant killed in plane crash was warned of sabotage A top level Republican IT consultant who was set to testify in a case alleging GOP election tampering in Ohio died in a plane crash late Friday night. Michael Connell -- founder of Ohio-based New Media Communications, which created campaign Web sites for George W. "The plane was attempting to land around 6 p.m. Connell's exploits as a top GOP IT 'guru' have been well documented by RAW STORY's investigative team. The interest in Mike Connell stems from his association with a firm called GovTech, which he had spun off from his own New Media Communications under his wife Heather Connells name. Connell is a long-time GOP operative, whose New Media Communications provided web services for the Bush-Cheney 04 campaign, the US Chamber of Commerce, the Republican National Committee and many Republican candidates. "Mr.

Cable Viewer Viewing cable 09TRIPOLI677, CODEL MCCAIN MEETS MUAMMAR AND MUATASSIM AL-QADHAFI Understanding cables Every cable message consists of three parts: The top box shows each cables unique reference number, when and by whom it originally was sent, and what its initial classification was.The middle box contains the header information that is associated with the cable. It includes information about the receiver(s) as well as a general subject.The bottom box presents the body of the cable. The opening can contain a more specific subject, references to other cables (browse by origin to find them) or additional comment. This is followed by the main contents of the cable: a summary, a collection of specific topics and a comment section. To understand the justification used for the classification of each cable, please use this WikiSource article as reference. Discussing cables If you find meaningful or important information in a cable, please link directly to its unique reference number.

So When will Dick Cheney be charged with Espionage? His Crime was the Same as Snowden's The US government charged Edward Snowden with theft of government property and espionage on Friday. Snowden hasn’t to our knowledge committed treason in any ordinary sense of the term. He hasn’t handed over government secrets to a foreign government. His leaks are being considered a form of domestic spying. Charging leakers with espionage is outrageous, but it is par for the course with the Obama administration. The same theory under which Edward Snowden is guilty of espionage could easily be applied to former vice president Dick Cheney. Cheney led an effort in 2003 to discredit former acting ambassador in Iraq, Joseph Wilson IV, who had written an op ed for the New York Times detailing his own mission to discover if Iraq was getting uranium from Niger. Cheney appears to have been very upset with Wilson, and tohave wished to punish him by having staffers contact journalists and inform them that Wilson’s wife, Valerie Plame, was secretly a CIA operative.

WikiLeaks Documents Reveal U.S. Knowingly Imprisoned 150 Innocent Men at Guantánamo This is a rush transcript. Copy may not be in its final form. AMY GOODMAN: A massive trove of documents obtained by the whistleblowing website WikiLeaks have revealed that the U.S. believed many of those held at Guantánamo were innocent or low-level operatives.The U.S. military dossiers, obtained by the New York Times and The Guardian of Britain, reveal how many prisoners were taken to the Guantánamo prison and held captive for years on the flimsiest grounds. The 759 Guantánamo files, classified as, quote, "secret," cover almost every prisoner since the camp was opened in 2002. Earlier this month, U.S. ATTORNEY GENERAL ERIC HOLDER: Members of Congress have intervened and imposed restrictions blocking the administration from bringing any Guantánamo detainees to trial in the United States, regardless of the venue. AMY GOODMAN: That was Attorney General Eric Holder speaking earlier this month. Andy, no, we’re not having you on in the London studio to talk about the royal wedding —

» Vote Obama For Unaccountable Drone Warfare. Vote Romney For Unaccountable Drone Warfare. Alex Jones Both candidates agree, secret kill lists and unaccountable CIA ‘double tap’ drone strikes are necessarySteve Watson Infowars.com Oct 23, 2012 Last night’s debate highlighted the fact that Barack Obama and Mitt Romney are in full agreement with each other that secret unmanned US missile strikes, documented to have killed thousands of innocent people, are “necessary” and “right “. When Romney was asked about the US policy of drone strikes in Pakistan and elsewhere, he responded: “Well, I believe that we should use any and all means necessary to take out people who pose a threat to us and our friends around the world. Indeed, perhaps the only difference you’ll get with Romney is that he’ll use even more drones… “But let me also note that, as I said earlier, we’re going to have to do more than just going after leaders and — and killing bad guys, important as that is.” Conor Friedersdorf at the Atlantic today poses the question ‘What If Mitt Romney Inherits Obama’s Killer Drone Fleet?’

P.A.N.D.A. People Against The NDAA | Declaring independence from tyranny since 1776