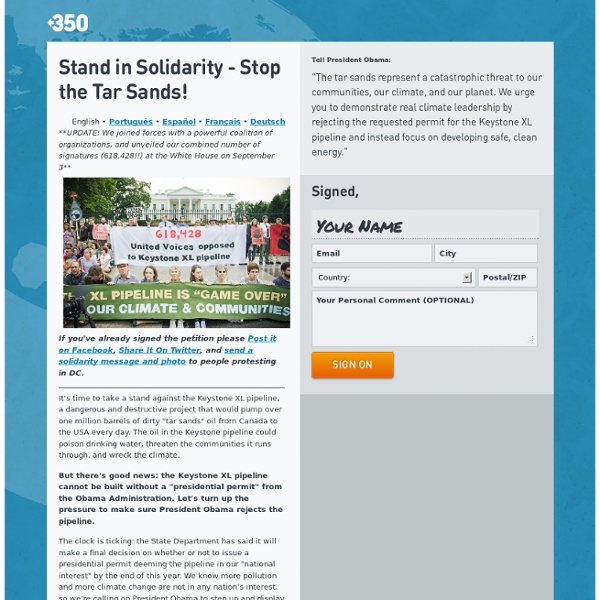 English • Português • Español • Français • Deutsch **UPDATE: We joined forces with a powerful coalition of organizations, and unveiled our combined number of signatures (618,428!!) at the White House on September 3** If you've already signed the petition please Post it on Facebook, Share It On Twitter, and send a solidarity message and photo to people protesting in DC. It's time to take a stand against the Keystone XL pipeline, a dangerous and destructive project that would pump over one million barrels of dirty "tar sands" oil from Canada to the USA every day. But there's good news: the Keystone XL pipeline cannot be built without a "presidential permit" from the Obama Administration. The clock is ticking: the State Department has said it will make a final decision on whether or not to issue a presidential permit deeming the pipeline in our "national interest" by the end of this year. Please sign on today by filling out the form in the box on the right. Related:  Action to Prevent Climate Change • Government Actions

Tech Planet Journal New WikiLeaks Cables Show US Diplomats Promote Genetically Engineered Crops Worldwide Dozens of United States diplomatic cables released in the latest WikiLeaks dump on Wednesday reveal new details of the US effort to push foreign governments to approve genetically engineered (GE) crops and promote the worldwide interests of agribusiness giants like Monsanto and DuPont. The cables further confirm previous Truthout reports on the diplomatic pressure the US has put on Spain and France, two countries with powerful anti-GE crop movements, to speed up their biotech approval process and quell anti-GE sentiment within the European Union (EU). Several cables describe "biotechnology outreach programs" in countries across the globe, including African, Asian and South American countries where Western biotech agriculture had yet to gain a foothold. Cables detail US efforts to influence the biotech policies of developed countries such as Egypt and Turkey, but France continues to stand out as a high-profile target.

StopGlobalWarming.org China admits to existence of 'cancer villages' sprouting up due to extreme pollution, chemical exposure (NaturalNews) On the heels of my own publication of articles questioning the integrity of "certified organic" when it comes to foods and superfoods produced in mainland China, a blockbuster report from China's own environmental ministry slams another exclamation mark on the severity of the problem. For the first time in history, the Chinese government is now openly admitting that severe exposure to chemicals via water pollution, air pollution and environmental pollution is causing the rise of "cancer villages" across China. Their report states: Poisonous and harmful chemical materials have brought about many water and atmosphere emergencies... certain places are even seeing 'cancer villages'... It goes on to admit: [China allows the use of] poisonous and harmful chemical products that are banned in developed countries and pose long-term or potential harm to human health and the ecology. Pollution? In reality, China has the worst pollution problems of any modern nation on our planet.

Santa Fe IV Plan Santa Fe IV Sven Alstrom, Designer South Elevation This one story Santa Fe Style Guest House is based upon 24-inch wide straw bale construction or adobe block on concrete foundation & footings with crawl spaces. Natural interior plaster and natural exterior stucco are recommended. The house is 1,650 square feet gross (outside dimension) plus the courtyard & porch. The perimeter wall total of the 2 foot thick wall shown is approx. 169 sq, ft, Therefore, the net useable interior square footage is approximately 1,481 net square feet. Section Floor Plan The open kitchen may seat eight and is shown with a work table next to the entry. Here is a quote from one of Sven's many satisfied customers: "Sven worked within the design times that he initially gave us, worked well with other design people, helped us negotiate a contract with the general contractor, and was very active in recommendations for purchased items and appliances. Copyright Ecological Architecture P.C. for this design.

on reserve Global Disaster Mitigation Our Infinite Future Series Part Two: Global Disaster Mitigation - Importance of Global Coherence Complete Destruction or Massive Positive Change. Yes you read correctly, you are not dreaming, Complete Destruction or Massive Positive Change resulting in Infinite Prosperity are the only two options on the table RIGHT NOW, but most of you out there remain Ignorant to this fact for some reason or other. For the record, Ignorance leads to destruction, positive action will lead humanity into an age of peace, coherence, eco-friendly technology and infinite positive systems. Scientists have recently begun to understand the mechanism for the Earth-Life connection and are now capable of measuring this interaction. A global real-time feedback system is now possible which would empower humanity to influence Earths weather and its magnetosphere with specific intent. Creating Global Coherence is only the beginning. To save our planet we must collaborate to re-design everything.

U.S. Denies Patent for a Too-Human Hybrid Scientist Sought Legal Precedent to Keep Others From Profiting From Similar 'Inventions' A New York scientist's seven-year effort to win a patent on a laboratory-conceived creature that is part human and part animal ended in failure Friday, closing a historic and somewhat ghoulish chapter in American intellectual-property law. The U.S. Patent and Trademark Office rejected the claim, saying the hybrid -- designed for use in medical research but not yet created -- would be too closely related to a human to be patentable. Paradoxically, the rejection was a victory of sorts for the inventor, Stuart Newman of New York Medical College in Valhalla, N.Y. An opponent of patents on living things, he had no intention of making the creatures. Officials said it was not so difficult to make the call this time because Newman's technique could easily have created something that was much more person than not. Others had used similar methods to create a "geep," part goat and part sheep. They lost.