China admits to existence of 'cancer villages' sprouting up due to extreme pollution, chemical exposure 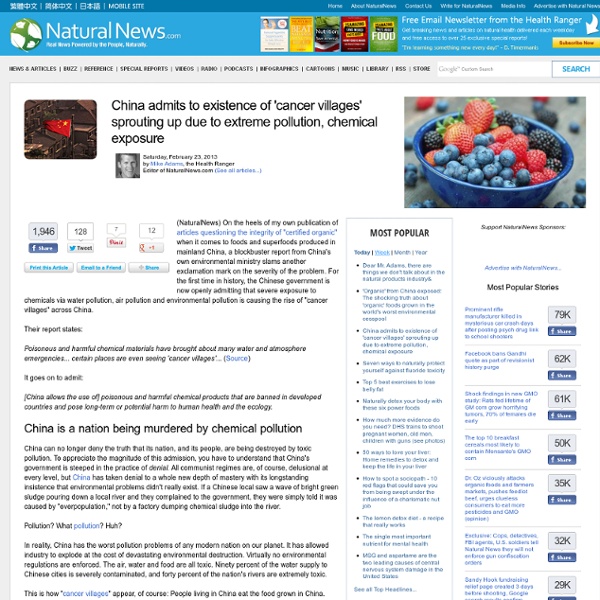 (NaturalNews) On the heels of my own publication of articles questioning the integrity of "certified organic" when it comes to foods and superfoods produced in mainland China, a blockbuster report from China's own environmental ministry slams another exclamation mark on the severity of the problem. For the first time in history, the Chinese government is now openly admitting that severe exposure to chemicals via water pollution, air pollution and environmental pollution is causing the rise of "cancer villages" across China. Their report states: Poisonous and harmful chemical materials have brought about many water and atmosphere emergencies... certain places are even seeing 'cancer villages'... It goes on to admit: [China allows the use of] poisonous and harmful chemical products that are banned in developed countries and pose long-term or potential harm to human health and the ecology. Pollution? In reality, China has the worst pollution problems of any modern nation on our planet. Related:  Environment and Climate Change • Government Actions

CIA Backs $630,000 Scientific Study on Controlling Global Climate By Dana Liebelson and Chris Mooney, MotherJones.com The Central Intelligence Agency is funding a scientific study that will investigate whether humans could use geoengineering to alter Earth's environment and stop climate change. The National Academy of Sciences (NAS) will run the 21-month project, which is the first NAS geoengineering study financially supported by an intelligence agency. With the spooks' money, scientists will study how humans might influence weather patterns, assess the potential dangers of messing with the climate, and investigate possible national security implications of geoengineering attempts. The total cost of the project is $630,000, which NAS is splitting with the CIA, the National Oceanic and Atmospheric Administration, and NASA. The NAS website says that "the US intelligence community" is funding the project, and William Kearney, a spokesman for NAS, told Mother Jones that phrase refers to the CIA.

+ Gulf Seafood | FDA Voice By: Michael R. Taylor, J.D. This week, the Fish and Wildlife Service will begin a series of public meetings on the draft plan for the restoration of damage to natural resources resulting from the Deepwater Horizon oil spill. It is natural that the discussion of this plan would also raise the question of whether Gulf seafood is safe to eat. When the Deepwater Horizon spill occurred, there was a great deal of concern over the safety of the region’s seafood. When we developed the sampling program, we had to determine which components of the oil were harmful so we could test for their levels in the seafood. The FDA, NOAA, EPA, and the Gulf States, discussed and agreed on a level of PAHs that would raise a health concern. It is also important to understand the process we used to sample the seafood. This process of double testing is not unlike the screening we go through when entering a court house, for example. Michael Taylor is Deputy Commissioner for Foods at FDA

on reserve A Republican Case for Climate Action There is no longer any credible scientific debate about the basic facts: our world continues to warm, with the last decade the hottest in modern records, and the deep ocean warming faster than the earth’s atmosphere. Sea level is rising. Arctic Sea ice is melting years faster than projected. The costs of inaction are undeniable. The lines of scientific evidence grow only stronger and more numerous. A market-based approach, like a carbon tax, would be the best path to reducing greenhouse-gas emissions, but that is unachievable in the current political gridlock in Washington. The president also plans to use his regulatory power to limit the powerful warming chemicals known as hydrofluorocarbons and encourage the United States to join with other nations to amend the Montreal Protocol to phase out these chemicals. As administrators of the E.P.A under Presidents Richard M. The solutions we supported worked, although more must be done. We can have both a strong economy and a livable climate.

= WTF! The ‘Horribly Mutated’ Seafood in The Gulf of Mexico BP oil spill: The ‘horribly mutated’ creatures living in the Gulf. Fish, shrimp, and crabs are missing eyes and suffering strange deformities, according to a harrowing new report — yet the FDA insists the seafood’s safe to eat. Shrimp born without eyes, clawless crabs, and fish with visible tumors are among the “horrible mutated”marine animals found in the waters off the Gulf Coast, according to a new report from Al Jazeera. Scientists say the problem is a side effect of the April 2010 explosion of BP’s Deepwater Horizon oil rig, which killed 11 people and spilled at least 4.9 million barrels of oil into the ocean. Here, a brief guide to the damage: “The fishermen have never seen anything like this,” Dr Jim Cowan told Al Jazeera. Gulf of Mexico fishermen, scientists and seafood processors have told Al Jazeera they are finding disturbing numbers of mutated shrimp, crab and fish that they believe are deformed by chemicals released during BP’s 2010 oil disaster. What does BP say? Sources:

U.S. Denies Patent for a Too-Human Hybrid Scientist Sought Legal Precedent to Keep Others From Profiting From Similar 'Inventions' A New York scientist's seven-year effort to win a patent on a laboratory-conceived creature that is part human and part animal ended in failure Friday, closing a historic and somewhat ghoulish chapter in American intellectual-property law. The U.S. Patent and Trademark Office rejected the claim, saying the hybrid -- designed for use in medical research but not yet created -- would be too closely related to a human to be patentable. Paradoxically, the rejection was a victory of sorts for the inventor, Stuart Newman of New York Medical College in Valhalla, N.Y. An opponent of patents on living things, he had no intention of making the creatures. Officials said it was not so difficult to make the call this time because Newman's technique could easily have created something that was much more person than not. Others had used similar methods to create a "geep," part goat and part sheep. They lost.

The Great American Genocide | We’ve reached the point that any person with critical thinking skills can no longer deny that we are being deliberately poisoned. Nearly everything that is reasonably priced to eat or drink is actually toxic. The glowing health claims and the stamps of approval from the EPA, the FDA, and USDA, are fraudulent smoke and mirrors – people are actually being deceived into spending money to purchase the substances that will lead to disease and demise. A chemical warfare has been declared on us. The battlefields are our homes, the grocery stores, the pharmacies. This is genocide, and we are the intended victims. Turning on the tap in many places releases a toxic stream into your glass or your shower. But this is just the tip of the iceberg. Chlorine: This removes disease-causing bacteria, which is great, but it also creates numerous toxic by-products, like chloroform and trihalomethanes. According to Dr. Ammonia: Fluoride: The grocery store is little more than a gauntlet. GMOs: Pesticides:

Guilty of Pesticide Crimes, Wal-Mart Fined $81 Million WASHINGTON, DC, May 28, 2013 (ENS) – Retail giant Wal-Mart Stores today pleaded guilty to illegally handling and disposing of hazardous pesticides at its retail stores across the United States. Hazardous wastes and pesticides returned to stores by customers were put into municipal trash bins or, if liquid, poured into local sewer systems, according to U.S. Justice Department and Environmental Protection Agency officials. Wal-Mart transported tons of these hazardous materials without proper safety documentation to one of six product return centers located throughout the United States. Wal-Mart Stores Inc. pleaded guilty in cases filed by federal prosecutors in Los Angeles and San Francisco to six counts of violating the Clean Water Act by illegally handling and disposing of hazardous pesticides at its retail stores. As part of a plea agreement filed in California, Wal-Mart was sentenced to pay a $40 million criminal fine. Copyright Environment News Service (ENS) 2013.

Do Hidden Opiates In Our Food Explain Food Addictions? By Sayer Ji Contributing Writer for Wake Up World Food addictions are not strictly “psychological” problems, but have a hard-wired, organic component. Many of the most commonly consumed foods in Western culture actually contain narcotic properties associated with the presence of psychoactive chemicals that bind to opioid receptors in the nervous system. These “food opiates” are heavily concentrated in wheat and dairy products, especially cow’s milk. * Gluten exorphin A5: H-Gly-Tyr-Tyr-Pro-Thr-OH* Gluten exorphin B4: H-Tyr-Gly-Gly-Trp-OH* Gluten exorphin B5: H-Tyr-Gly-Gly-Trp-Leu-OH* Gluten exorphin C: H-Tyr-Pro-Ile-Ser-Leu-OH* Gliadorphin: Tyr-Pro-Gln-Pro-Gln-Pro-Phe Cow milk, depending on the milk variety (A1 or A2), contain a variety of combinations of the following casomorphin peptides: It can be argued that many of the most popular foods consumed in Western culture are done so notprimarily for their nutritive value but rather for their addictive properties. About the Author

Outbreak of Salmonella from Foster Farms Chicken Sickens Nearly 300 and Hospitalizes 42 Percent Shutdown Puts Americans at Risk as Government Struggles to Respond October 8, 2013 An outbreak of Salmonella that has sickened nearly 300 people in 18 states is testing the federal government’s ability to respond, as key food safety personnel at the U.S. Department of Agriculture and key disease-surveillance scientists at the Centers for Disease Control and Prevention are not at their posts due to the government shutdown. The illnesses are linked to chicken from three Foster Farms facilities in California. “The number of people we know to be ill is just the tip of the iceberg,” said CSPI food safety director Caroline Smith DeWaal. In 2011, CSPI urged the USDA to declare antibiotic-resistant strains of Salmonella in ground meat and poultry, including the antibiotic-resistant Salmonella Heidelberg identified in this outbreak, as adulterants under federal law.

Why Are Millions Of Fish Suddenly Dying In Mass Death Events All Over The Planet? Michael SnyderActivist Post Millions upon millions of fish are suddenly dying in mass death events all over the world, and nobody seems to know why it is happening. In many of the news reports that are linked to below, locals are quoted as saying that they have never seen anything like this before. So is there a connection between all of the fish deaths that are now occurring all over the planet? If there is a connection, is there anything that we can do to stop the fish die-off? Please share the list posted below with as many people as you can. -July 18, 2013: 20 acres of fish ponds full of dead fish in Shandong, China -July 18, 2013: Hundreds of dead Stingrays wash ashore in Veracruz, Mexico -July 18, 2013: 10,000 lbs of dead fish found in a lake in Nanjing, China -July 18, 2013: Thousands of fish dead from “lack of rain” in Sugar Lake, Missouri -July 18, 2013: Large numbers of fish washing up on the shores of Lake Michigan -July 22, 2013: Large fish kill at Grand Lake in St.