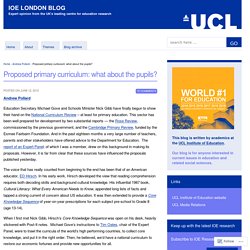 This sector has been well prepared for development by two substantial reports — the Rose Review, commissioned by the previous government, and the Cambridge Primary Review, funded by the Esmee Fairbairn Foundation. And in the past eighteen months a very large number of teachers, parents and other stakeholders have offered advice to the Department for Education. Early Career Framework. - The Washington Post. The only way to end the class divide: the case for abolishing private schools. Unlikely as it might sound, one of the most electric political meetings I have ever attended was a lecture on the Finnish educational system given by Pasi Sahlberg, the Finnish educator and author, in London in the spring of 2012. 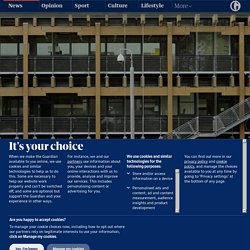 Sahlberg, who was speaking to a packed committee room 14 of the House of Commons – the most magnificent of a run of grand meeting rooms that directly overlook the Thames – has a rather laconic manner of delivery. However, in this particular instance, his flat speaking style proved the perfect vehicle for an unexpectedly radical message. Sahlberg described how Finnish education had evolved, in the postwar period, from a steeply hierarchical one, rather like our own, made up of private, selective and less-well regarded “local” schools, to become a system in which every child attends the “common school”. We urgently need to renew the conversation about the private-public divide, and move beyond the superficial, profoundly apolitical debates of recent years.

A baseline without basis BERA summary report July2018. Bad news to bury worse news. The DfE announced today that it plans to introduce a multiplication tables check in Year 4 – and I’m angry. 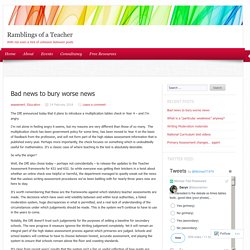 I’m not alone in feeling angry it seems, but my reasons are very different than those of so many. The multiplication check has been government policy for some time, has been moved to Year 4 on the basis of feedback from the profession, and will not form part of the high stakes assessment information that is published every year. Perhaps more importantly, the check focuses on something which is undoubtedly useful for mathematics. It’s a classic case of where teaching to the test is absolutely desirable. What’s the evidence on ….grammar schools. 5, June, 2017. 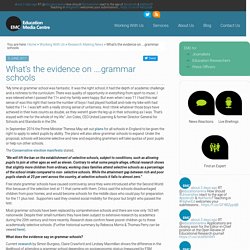 Secret Teacher: the obsession with league tables cheats our children. Since September our school has been doing everything possible to game the system. 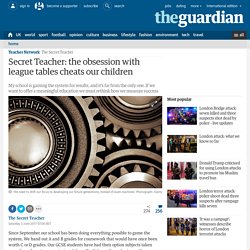 We hand out A and B grades for coursework that would have once been worth C or D grades. Our GCSE students have had their option subjects taken away from them to concentrate solely on English, maths and science. Our weakest students have been moved on to vocational subjects so that their results do not affect league tables, and our younger students are left with supply teachers because their results don’t matter for at least another two years. Every decision is made with the league table in mind. It seems clear that my school is not alone in using these types of tactics. Primary schools to get minimum funding of £3,500 per-pupil. The government’s long-awaited national funding formula will include a minimum per-pupil funding amount for both primary and secondary schools, Justine Greening has announced today. 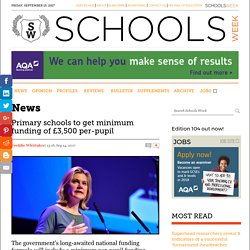 The education secretary says primary schools will get at least £3,500 for every pupil on their roll from 2019-20, an extension of the £4,800 per-pupil funding guarantee for secondary schools that was announced in July. Every school in England will also receive a lump sum of £110,000 to help with fixed costs, and there is also a £26 million fund to help “rural and isolated” schools to manage their “unique challenges”. The fundamental problem is there is not enough funding going into education. ‘When I saw the opportunity to take the prime minister to task over grammar schools, I had to take it’ – The NFER blog.

By Karen WespieserThis blog first appeared on TES, Monday 22 May 2017. 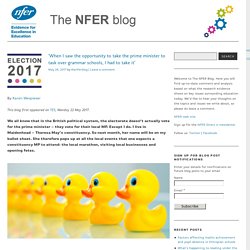 We all know that in the British political system, the electorate doesn’t actually vote for the prime minister – they vote for their local MP. Except I do. I live in Maidenhead – Theresa May’s constituency. So next month, her name will be on my ballot sheet. She therefore pops up at all the local events that one expects a constituency MP to attend: the local marathon, visiting local businesses and opening fetes. Academy chains' performance 'less impressive' than local authorities, new ranking shows. Selection brings policy carnage. I am clear that the decision to reintroduce selection big-time into English schooling is a huge error. 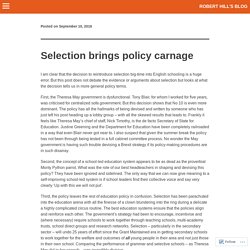 But this post does not debate the evidence or arguments about selection but looks at what the decision tells us in more general policy terms. First, the Theresa May government is dysfunctional. Tony Blair, for whom I worked for five years, was criticised for centralized sofa government. But this decision shows that No 10 is even more dominant. 'Glass floor' protecting middle classes from social slide - report - BBC News. Middle-class children benefit from a "glass floor" protecting them from slipping down the social scale in Britain, a report has said. 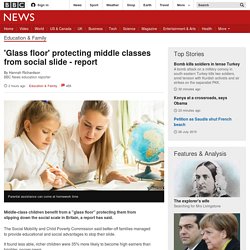 The Social Mobility and Child Poverty Commission said better-off families managed to provide educational and social advantages to stop their slide. It found less able, richer children were 35% more likely to become high earners than brighter, poorer peers. The government said its reforms were helping disadvantaged pupils catch up. The report for the commission, which advises the government on social mobility issues, was based on a long-term study of 17,000 British-born children born in a single week in 1970 that measured their ability at the age of five. How to privatise the education system, without people noticing – a step by st... First, design a performance system that compares every school’s outcome against the national average – thereby ensuring that there will always be a large proportion of schools whose results are deemed ‘broadly average’ (and a chunk of schools deemed significantly below average).Create an Inspection system that will declare any school that has consistently attained below-average results to be Inadequate.Where schools are found to be Inadequate, claim that this is proof that being “controlled by the local authority” is not working.

Hand over all the publicly funded assets of such schools (buildings, land and all) to a private company – along with a huge cash boost to cover “conversion costs”.Wipe the slate clean, in terms of the previous years of poor results (because this is now a different school, so those legacy results no longer apply) and re-inspect it before the next set of results are published. Too confused to be jaded. A Letter to the Secretary of State. Dear @nickymorgan01 I sit here contemplating whether writing this is a good idea/a waste of time/a drop in the ocean. I am the Principal of a school where the governors decided to take the option to become an academy and then an academy sponsor.

We officially decided to work in partnership (I use these words deliberately rather than ‘take over’ ‘run’ etc) with our two nearest primary schools that had just been deemed to be ‘Special Measures’ (SM) and ‘Requires Improvement’ (RI). Nservative government: what does it mean for schools? At a certain point last night I grabbed our election supplement and flipped nervously to the Conservative education pledge list. It was the first time I’d considered a party might need to deliver their list in full. So, what can we expect from a fully Conservative department? The Ministers.