Lawrence Lessig: We the People, and the Republic we must reclaim 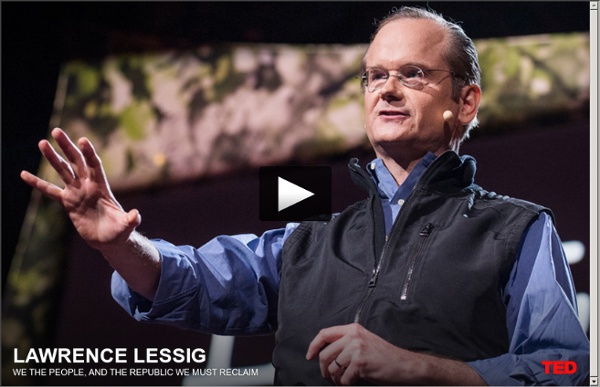 Charts: The Staggering Cost of Death Row for California Taxpayers California Innocence Project. I recently came across an ambitious infographic created by the California Innocence Project following the failure of state Proposition 34, which, had it passed last November, would have abolished the death penalty in California. Voters weren't quite ready to go there—they rejected Prop. 34 by a 52-48 margin. The infographic is worth revisiting in light of California's policy on capital punishment remaining status quo. What sentencing people to death costs California taxpayers: How much more it costs to keep someone on death row: How much Californians pay per execution, and how long it takes: The number of people California sentences to death: The skewed racial makeup of the condemned: The relative size of California's death row population: The number of people wrongfully sentenced to death in California and elsewhere—that we know of… …in many cases because of racism, incompetence, and/or official misconduct:

You Need to See These 5 Shocking Facts About Money in the 2012 Elections Sheldon Adelson.Photo by Color China Photos/Zuma Press Not since the years before the Watergate scandal has a small cadre of mega-donors influenced our elections as much as wealthy givers such as casino tycoon Sheldon Adelson, DreamWorks Animation CEO Jeffrey Katzenberg, Texas homebuilder Bob Perry, and Chicago media mogul Fred Eychaner did in 2012. These men and a few dozen others pumped hundreds of millions of dollars into super-PACs and shadowy nonprofits and raised tens of millions more for presidential and Congressional campaigns. Now, a new report titled "Billion-Dollar Democracy" by the Demos think tank and the US Public Interest Research Group, both left-of-center groups, distills all the fundraising and spending on last year's elections and spits out an array of eye-popping factoids about where all the money came from (or most of it, at least) and how it was spent. I've plucked out five must-see highlights from the report, with graphics courtesy of Demos and US PIRG:

Dark Money Rises Hundreds of millions of dollars spent on this election came from faceless donors. A TIME/ProPublica report on how mystery cash is changing American politics. This post was co-published [1] with TIME [2]. About a week before election day, a young girl, maybe 10 years old, confronted Colorado House candidate Sal Pace [3] in a pew at his Pueblo church. Like many other Democrats around the country, Pace has spent months trying to rebut the charge that President Obama's health care reforms hurt Grandma by cutting Medicare by $716 billion. What Pace couldn't tell the girl was who exactly is to blame. This sort of thing has been happening a lot this year in House and Senate races around the country. Spending by outside groups is nothing new in American politics. Ads purchased with untraceable money tend to be among the most vicious. The man behind the Colorado ads, Grover Norquist, is not shy about discussing the mechanics behind mounting multimillion-dollar dark-money campaigns.

Here's What Big Money Buys You in the 2012 Presidential Campaign Via Andrew Sullivan, the chart below compares TV ad buys for the presidential contests of 2008 and 2012. The raw data comes from Kantar Media's Campaign Media Analysis Group, as reported by Elizabeth Wilner of Advertising Age. The big takeaway is that 2012 spending in battleground states is running at about three times its 2008 level. Based on past patterns, Wilner figures this means that the two campaigns will be airing about 43,000 ads per day for the rest of the election cycle. And that's just presidential ads. The other big takeaway is the difference in strategy between the two campaigns. The Obama campaign has seen this contest as a seven-month run, while the Romney campaign has seen it as a three-month sprint. Fasten your seat belts.

An Interactive Map of the Dark-Money Universe Tracking the flow and impact of money in politics has long been one of Mother Jones' main beats. Since the 2010 Citizens United decision paved the way for a new era of bottomless election spending, we've been focused on what we call "dark money"—the hundreds of millions of dollars being dropped by outside groups, much of it without full disclosure of where it's coming from. The key players in this new world are super-PACs, which may raise and spend unlimited sums of money for or against candidates; and 501(c) nonprofit groups, which may make political ads and give money to super-PACs without disclosing their donors. We wanted to visualize the major super-PACs and 501(c)s in a way that would provide both a good overview of outside spending in this election cycle as well as detailed information about each group. The current version of this chart shows just one slice of the dark-money universe: There are hundreds of smaller super-PACs and 501(c)s that are not included in this version.

Politics - James Fallows - SCOTUS Update: La Loi, C'est Moi I am not enough of a Supreme Court buff to have any confident idea of what the majority will rule on the Obama health care plan. But confidence in the very idea that the Roberts majority will approach this as a "normal" legal matter, rather than as one more Bush v. Gore front in the political wars, grows ever harder to maintain, especially after the latest labor-rights ruling. It is worth reading carefully this lead editorial in yesterday's New York Times. Normally I shy away from apocalyptic readings of the American predicament. Liberal democracies like ours depend on rules but also on norms -- on the assumption that you'll go so far, but no further, to advance your political ends. Three items for extra reading. 1) On how Democrats in general should react if the Court, as seems likely, announces a plainly partisan ruling about the health care law, see Michael Tomasky's argument. At his hearings, Roberts sounded the notes of "humility" and "modesty" repeatedly.

How John Roberts Orchestrated Citizens United When Citizens United v. Federal Election Commission was first argued before the Supreme Court, on March 24, 2009, it seemed like a case of modest importance. The issue before the Justices was a narrow one. The McCain-Feingold campaign-finance law prohibited corporations from running television commercials for or against Presidential candidates for thirty days before primaries. During that period, Citizens United, a nonprofit corporation, had wanted to run a documentary, as a cable video on demand, called “Hillary: The Movie,” which was critical of Hillary Clinton. The F.E.C. had prohibited the broadcast under McCain-Feingold, and Citizens United had challenged the decision. Chief Justice John G. That day, it was David Souter, who was just a few weeks away from announcing his departure from the Court. The Justices settled into their usual positions. Then Antonin Scalia spoke up. “So you’re making a statutory argument now?” “I’m making a—” Olson began. That’s right, Olson responded.

Want to Ditch Citizens United? A DIY Guide Many Americans still don't know what Citizens United is, but most are unhappy with the impact of the 2010 Supreme Court decision that led to the birth of the megadonor-fueled super-PAC. Now, efforts are afoot to reverse the unpopular ruling altogether. But will they work? Let this choose-your-own-adventure-style flowchart guide you through the steps to a Citizens United-free America. <p>Sadly, in order to play, you must have javascript enabled. Don't have time to click? Front page photo illustration by Dave Gilson.