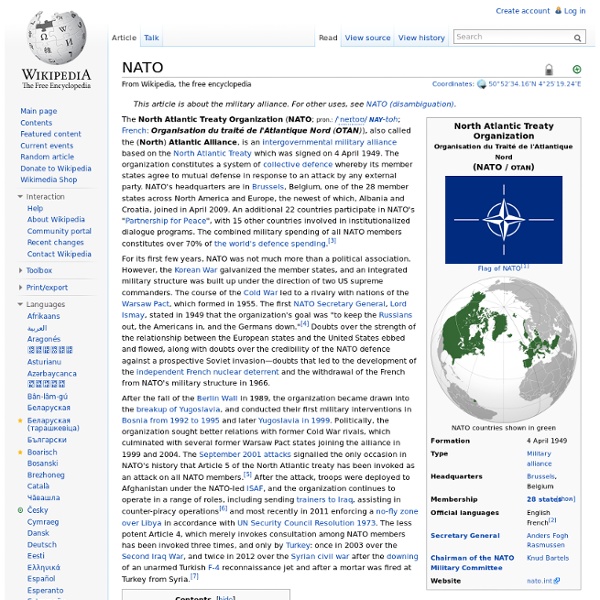 Coordinates: The North Atlantic Treaty Organization (NATO; /ˈneɪtoʊ/ NAY-toh; French: Organisation du traité de l'Atlantique Nord (OTAN)), also called the (North) Atlantic Alliance, is an intergovernmental military alliance based on the North Atlantic Treaty which was signed on 4 April 1949. The organization constitutes a system of collective defence whereby its member states agree to mutual defense in response to an attack by any external party. Article 5 of the North Atlantic treaty, requiring member states to come to the aid of any member state subject to an armed attack, was invoked for the first and only time after the 11 September 2001 attacks,[6] after which troops were deployed to Afghanistan under the NATO-led ISAF. History Beginnings The North Atlantic Treaty was signed in Washington, D.C., on 4 April 1949 and was ratified by the United States that August. Cold War The German Bundeswehr provided the largest element of the allied land forces guarding the frontier in Central Europe.

International Security Assistance Force ISAF was initially charged with securing Kabul and surrounding areas from the Taliban, al Qaeda and factional warlords, so as to allow for the establishment of the Afghan Transitional Administration headed by Hamid Karzai.[3] In October 2003, the UN Security Council authorized the expansion of the ISAF mission throughout Afghanistan,[4] and ISAF subsequently expanded the mission in four main stages over the whole of the country.[5] From 2006 to 2011, ISAF had been involved in increasingly more intensive combat operations in southern and eastern Afghanistan. Troop contributors include from the United States, United Kingdom, NATO member states and a number of other countries. The intensity of the combat faced by contributing nations varies greatly, with the United States sustaining the largest numbers of casualties in intensive combat operations, but with other contributors, especially the United Kingdom, Canada, and Denmark, sustaining relatively higher rates of casualties. History[edit]

Pulling the Teeth of the Tiger | Pundit Extracting information on military operations in Afghanistan from the New Zealand Defence Force is difficult at the best of times. The Christmas Eve NZSAS raid on the business premises of the Afghan Tiger Group in Kabul last year was not one of NZDF’s best times... The so-called “combined forces” Christmas raid on the head quarters of the Kabul company that supplies vehicles to the U.S. military seems to have been a messy operation from start to finish. It went something like this. International Security Assistance Force headquarters received credible intelligence that a bomb attack on the U.S. The Afghan Crisis Response Unit being mentored by our SAS was called out, and the Kabul police were alerted. Here in New Zealand, we remained blissfully ignorant of the whole schermozzle – until Jon Stephenson stirred the pot last May with his Metro article “Eyes Wide Shut”. What Jones did not mention was the uproar that the shooting of civilians in the raid caused in Kabul.

World military expenditures This article is a list of countries by military expenditure, the amount spent by a nation on its military in a given year. Military expenditure figures[2] are presented in US$ based on either constant or current exchange rates. These results can vary greatly from one year to another based on fluctuations in the exchange rates of each country's currency. Such fluctuations may change a country's ranking from one year to the next. Currently, the world's six largest military spenders are the United States, China,[3] Russia, the United Kingdom, Japan and France, all of whom are recognized as world powers. The UK, US, Russia, China and France are all veto-wielding permanent members of the United Nations Security Council. The first list is based on the Stockholm International Peace Research Institute (SIPRI) Yearbook 2013 which includes a list on the world's top 15 military spenders in 2012, based on current market exchange rates. SIPRI Yearbook 2013 – World's top 15 military spenders[edit]

Hijackers in the September 11 attacks The hijackers in the September 11 attacks were 19 men affiliated with al-Qaeda, and 15 of the 19 were citizens of Saudi Arabia. The others were from the UAE (2), Egypt and Lebanon. The hijackers were organized into four teams, each led by a pilot-trained hijacker with four "muscle hijackers" who were trained to help subdue the pilots, passengers, and crew. The first hijackers to arrive in the United States were Khalid al-Mihdhar and Nawaf al-Hazmi, who settled in the San Diego area in January 2000. They were followed by three hijacker-pilots, Mohamed Atta, Marwan al-Shehhi, and Ziad Jarrah early in the summer of 2000 to undertake flight training in south Florida. The fourth hijacker-pilot, Hani Hanjour, arrived in San Diego in December 2000. Background[edit] Selection[edit] Khalid al-Mihdhar and Nawaf al-Hazmi were both experienced and respected jihadists in the eyes of al-Qaeda leader, Osama bin Laden. "Muscle" hijackers[edit] Hijacked aircraft[edit] United Airlines Flight 93[edit]

Al-Qaeda Al-Qaeda around the world. Al-Qaeda (/ælˈkaɪdə/ al-KY-də; Arabic: القاعدة‎ al-qāʿidah, Arabic: [ælqɑːʕɪdɐ], translation: "The Base" and alternatively spelled al-Qaida and sometimes al-Qa'ida) is a global militant Islamist and takfiri organization founded by Abdullah Yusuf Azzam and Osama bin Laden in Peshawar, Pakistan,[22] at some point between August 1988[23] and late 1989,[24] with its origins being traceable to the Soviet War in Afghanistan.[25] It operates as a network comprising both a multinational, stateless army[26] and a radical Sunni Muslim movement calling for global Jihad and a strict interpretation of sharia law. It has been designated as a terrorist organization by the United Nations Security Council, NATO, the European Union, the United Kingdom, the United States, India and various other countries (see below). Al-Qaeda has carried out many attacks on non-Sunni Muslims,[27] non-Muslims,[28][29] and other targets it considers kafir.[30] Organization Leadership Financing Name

New Zealand Special Air Service The New Zealand Special Air Service, abbreviated as the NZSAS, was formed on 7 July 1955 and is the special forces unit of the New Zealand Army, closely modelled on the British Special Air Service (SAS). It traces its origins to the Second World War and the famous Long Range Desert Group that a number of New Zealanders served with. The NZSAS was accorded Regimental status in 2013 and presently has the responsibility of conducting domestic Counter-Terrorism operations, overseas Special Operations missions and performing the disposal of chemical, biological, radioactive and improvised explosive devices for both the military and civilian authorities. History[edit] The NZSAS can trace its roots back to the famous Long Range Desert Group, a British/Commonwealth army unit which fought in the North African desert in World War II. The NZSAS were granted the Freedom of the Borough of Thames on 27 September 1967.[8] Unit Location[edit] Unit Designation[edit] Dress Distinctions[edit] Thailand 1962[edit]

NATO Member Countries Map, NATO Map The North Atlantic Treaty Organization (NATO) is an alliance of 28 member nations, headquartered in Belgium, that unites the members in a defense pact. A military attack on one of these nations is considered an attack against them all, and each country contributes to the defense. Today, the nations together account for 70 percent of defense spending worldwide. Headquartered in Brussels, Belgium, NATO worked to redefine its role and responsibilities in the years after the fall of the common enemy and with the changing political and economic interests of its member countries. After the North Atlantic Treaty was signed on April 4, 1949, additional countries have joined NATO, bringing the total number of member countries to 28. Current members of NATO include:

Topic: NATO’s relations with partners across the globe The contributions from global partners and other countries to NATO-led operations have a direct, advantageous impact for international peace and security. In the Balkans, Argentinean and Chilean forces have worked alongside NATO Allies to ensure security in Bosnia and Herzegovina. In Kosovo, Argentina has helped NATO personnel provide medical and social assistance to the local population and cooperated on peace agreement implementation since 1999. In Afghanistan, a number of global partners such as Australia, the Republic of Korea and New Zealand, work alongside the Allies as part of the International Security Assistance Force (ISAF). Other countries, such as Japan, support ISAF efforts of stabilisation in Afghanistan without being involved in combat, by funding a large number of development projects and dispatching liaison officers. Typically, partner military forces are incorporated into operations on the same basis as are forces from NATO member countries.

Fast facts about NATO - World In April 2009, NATO marked its 60th anniversary as 28 world leaders converged in France. ((iStock)) The North Atlantic Treaty Organization was formed shortly after the end of the Second World War to counter the threat of Soviet invasion of Western Europe. The treaty setting up the alliance was signed in 1949 by 10 Western European nations as well as Canada and the United States. NATO's mandate is to provide a common defence for the European and Atlantic areas, and to address common issues faced by the member countries. Membership (year of entry in brackets): As evidenced by Article One of the treaty, the authors took pains to respect and complement the principles of the United Nations charter, which was signed four years earlier: Article Seven of the treaty emphasizes that UN Security Council responsibility for international peace and security will always take precedence over any NATO obligations. With the end of the Cold War, NATO was forced to change to suit the times. Structure