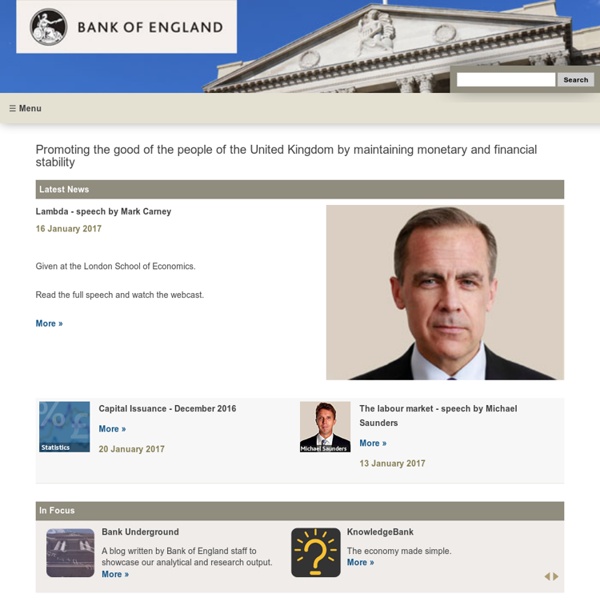 Monetary Policy Committee (MPC) Interest rates are set by the Bank’s Monetary Policy Committee. The MPC sets an interest rate it judges will enable the inflation target to be met. The Bank's Monetary Policy Committee (MPC) is made up of nine members – the Governor, the two Deputy Governors, the Bank's Chief Economist, the Executive Director for Markets and four external members appointed directly by the Chancellor. The appointment of external members is designed to ensure that the MPC benefits from thinking and expertise in addition to that gained inside the Bank of England. Members serve fixed terms after which they may be replaced or re-appointed. Each member of the MPC has expertise in the field of economics and monetary policy.

Bank of England - Wiki The Bank of England, formally the Governor and Company of the Bank of England, is the central bank of the United Kingdom and the model on which most modern central banks have been based. Established in 1694, it is the second oldest central bank in the world, after the Sveriges Riksbank, and the world's 8th oldest bank. It was established to act as the English Government's banker, and is still the banker for the Government of the United Kingdom. The Bank was privately owned by stockholders from its foundation in 1694 until nationalised in 1946.[3][4]

Central bank - Wiki The primary function of a central bank is to manage the nation's money supply (monetary policy), through active duties such as managing interest rates, setting the reserve requirement, and acting as a lender of last resort to the banking sector during times of bank insolvency or financial crisis. Central banks usually also have supervisory powers, intended to prevent bank runs and to reduce the risk that commercial banks and other financial institutions engage in reckless or fraudulent behavior. Central banks in most developed nations are institutionally designed to be independent from political interference.[4][5] Still, limited control by the executive and legislative bodies usually exists.[6][7] The chief executive of a central bank is normally known as the Governor, President or Chairman. History[edit] Prior to the 17th century most money was commodity money, typically gold or silver.

House Plans for a detached house showing the social functions for each room Transitory accommodation, such as a hospital, prison, boarding school, college or university is not normally considered permanent enough to replace a more stable location as 'home'. In 2005, some 100 million people worldwide were estimated to be homeless, although some prefer the term 'houseless' or 'unsheltered'.

Representative Office for the Americas Last update 26 February 2014 The BIS established its Representative Office for the Americas in Mexico City in November 2002. The Office's main areas of activity are related to Latin America and the Caribbean and include: Bank of England court worried about Mervyn King's politicised role Giving evidence to the Treasury Select Committee on Tuesday, Sir Roger Carr, a member of the court and former chairman of Cadbury, said it was important that Mervyn King was not drawn into politics. "The integrity and credibility of the Bank are absolutely dependent on it not being seen as having a political axe to grind, so that for me is of paramount importance. We have made that very clear to the Governor," said Sir Roger.

Earth Earth is the third planet from the Sun. It is the densest and fifth-largest of the eight planets in the Solar System. It is also the largest of the Solar System's four terrestrial planets. It is sometimes referred to as the world or the Blue Planet.[23] Earth formed approximately 4.54 billion years ago, and life appeared on its surface within its first billion years.[24] Earth's biosphere then significantly altered the atmospheric and other basic physical conditions, which enabled the proliferation of organisms as well as the formation of the ozone layer, which together with Earth's magnetic field blocked harmful solar radiation, and permitted formerly ocean-confined life to move safely to land.[25] The physical properties of the Earth, as well as its geological history and orbit, have allowed life to persist.

Bank of England injects further £75bn into economy 6 October 2011Last updated at 15:11 The governor of the Bank of England, Mervyn King, tells the BBC that quantitative easing will have an effect The Bank of England has said it will inject a further £75bn into the economy through quantitative easing (QE). The Bank has already pumped £200bn into the economy by buying assets such as government bonds, in an attempt to boost lending by commercial banks. But this is the first time it has added to its QE programme since 2009. There have been recent calls for it to step in again to aid the fragile recovery. Registration Services - Certificate Ordering Service The General Register Office holds a central copy of all registrations for England and Wales. Local Register Offices also hold records of events registered in their area. For recent events registered within the last 6 months (for marriages this period is extended to 18 months), applications for certificates should be made to the Register Office in the district where the birth, death or marriage took place.

Why Time Seems to Speed Up as We Get Older: What the Research Says No matter what age we’ve attained, we can think back to childhood and feel just how agonizingly long it then took for Christmas to come, for the school day to end, for a tray of cookies to come out of the oven. Mysterious as this apparent change in the speed of time may at first seem, it actually makes a kind of intuitive sense: one day represents, at the age of fifty, a tenth of the proportion of the time we’ve experienced so far than it does at the age of five. As our timeline lengthens, our perception of certain fixed units on that timeline — a minute, a year, a decade — shortens.

Mervyn King (economist) - Wiki Mervyn Allister King, Baron King of Lothbury, GBE FBA (born 30 March 1948) was the Governor of the Bank of England and Chairman of its Monetary Policy Committee from 2003 to 2013. He had been Deputy Governor from 1998 to 2003, Chief Economist and Executive Director from 1991, and a non-executive director of the Bank from 1990 to 1991.[2] King is a Fellow of the British Academy, an Honorary Fellow of King's and St John's Colleges, Cambridge and holds Honorary Degrees from Cambridge, Birmingham, City of London, Edinburgh, London Guildhall (now London Metropolitan University), London School of Economics, Wolverhampton, Worcester and Helsinki Universities. He is a Foreign Honorary Member of the American Academy of Arts and Sciences, sits on the Advisory Council of the London Symphony Orchestra, is a Patron of Worcestershire County Cricket Club, Honorary President of Ekenäs Cricket Club in Finland,[3] and a Trustee of the National Gallery.[2] King had faced accusations[who?]