Pandemics and Traditional Plant-Based Remedies. A Historical-Botanical Review in the Era of COVID19. Introduction Pandemics have shaped the history of mankind, and plants were usually the first available therapeutic choice. 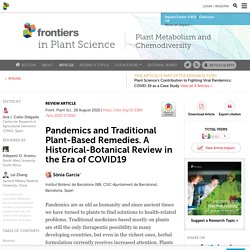 There is evidence of herbal preparations by Egyptians around 1500 BC, later improved by Greeks and Romans, and widely documented in official drug books known as Pharmacopoeias. Plant Architecture and Its Evolutionary Implications. Another interesting finding borne from these models is that there doesn't seem to be strong correlations between architecture and phylogeny. 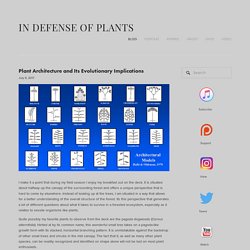 Although species within a specific genus often share similar architecture, there are plenty of exceptions. What's more, the same form can occur in unrelated species. For instance, Aubréville's model occurs in at least 19 different families. Similarly, the family Icacinaceae, which contains somewhere between 300 and 400 species, exhibits at least 7 of the different models. Alternatively, some families are architecturally quite simple. Jepson Herbarium.

Fungi. Lichen. Mosses. Orchids. Plant Point of View: Orchids. This series is the exploration of plants that are notable for various reasons: e.g., by producing specialized metabolites, by illuminating evolution, by serving as genetic models, or by their contributions towards practical applications. 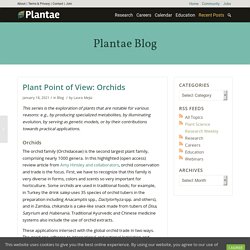 MoBot Discovered About 200 New Plants In 2020. The Missouri Botanical Garden proved crucial to plant conservation studies over the past year: All told, the organization discovered about 200 plant species, roughly 10% of what scientists identified worldwide in 2020. 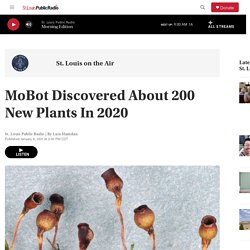 Jim Miller describes it as a race against time. “We are racing against time to describe things before their habitats are destroyed or degraded. We know about 300,000 species of plants, but they are probably in excess of another 100,000 that still remain to be discovered and described,” the garden’s senior vice president of science explained on Wednesday’s St. Louis on the Air. Miller joined the program alongside Missouri Botanical Garden President Peter Wyse Jackson to share examples of new discoveries and talk about the overarching view and particularities of this work.

How Woody Vines Do the Twist. “Whereas trees all tend to be the same shape, lianas are all over the place,” said Stefan Schnitzer, a botanist at Marquette University who was not involved in the study. 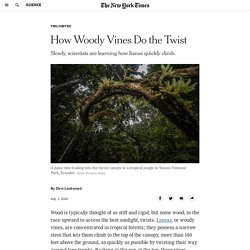 These strange stem variations give the vines an advantage. “Being asymmetrical helps you to anchor in the trees you’re growing on,” said Marcelo Rodrigo Pace, a botanist at Universidad Nacional Autónoma de México and a co-author of the study. “These lianas also have tendrils that let them grab pieces of stems and leaves and start growing.” The botany in Obama's official portrait represents his history. Ink Foraging in Central Park. On a recent drizzly Tuesday morning, a small group of ink enthusiasts—already rain-slicked, under umbrellas and ponchos—stood on Gapstow Bridge, in Central Park, admiring a brilliant-pink pokeweed bush. 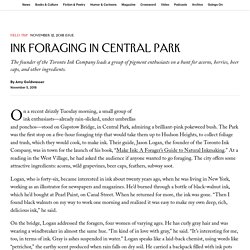 The Park was the first stop on a five-hour foraging trip that would take them up to Hudson Heights, to collect foliage and trash, which they would cook, to make ink. Their guide, Jason Logan, the founder of the Toronto Ink Company, was in town for the launch of his book, “Make Ink: A Forager’s Guide to Natural Inkmaking.” At a reading in the West Village, he had asked the audience if anyone wanted to go foraging. Tiny Chinese seaweed is oldest green plant fossil ever found. Scientists have found in rocks from northern China what may be the oldest fossils of a green plant ever found: tiny seaweed that carpeted areas of the seafloor 1bn years ago and were part of a primordial revolution among life on Earth. 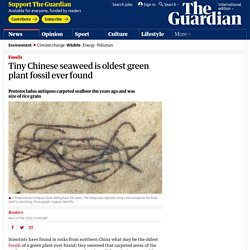 Researchers on Monday said the plant, called Proterocladus antiquus, was about the size of a rice grain and boasted numerous thin branches, thriving in shallow water while attached to the seafloor with a root-like structure. It may seem small, but Proterocladus – a form of green algae – was one of the largest organisms of its time, sharing the seas mainly with bacteria and other microbes. It engaged in photosynthesis, transforming energy from sunlight into chemical energy and producing oxygen. Earth’s biosphere depends heavily on plants for food and oxygen. The first land plants, thought to be descendents of green seaweeds, appeared about 450m years ago. Plant of the Month: Agave. The global tequila market will be worth $6.36 billion by the end of 2025. 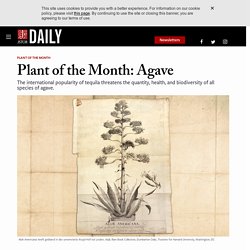 Yet 2020 marks the height of a worldwide tequila shortage that has been ramping up for more than two years, the result of unsustainable agave farming and harvesting practices. The international popularity of the liquor threatens the quantity, health, and biodiversity not only of the agave used for tequila, but all agave species and even bats. The problem is that traditional agave farming could not keep pace with the ever-increasing global demand for tequila. As a consequence, genetically diverse, locally adapted, and traditionally cultivated agave farms were replaced by large-scale, commercial blue agave plantations, which often placed profit over crop diversity and sustainability. Produced primarily in the area surrounding the city of Tequila and in the Jalisco Highlands of central western Mexico, tequila is a spirit distilled from agave and thus a type of mescal.

Plant of the Month: Heliconia. Even among spectacular tropical beauties, heliconias stand out.

Native mostly to Central and South America, this iconic herbaceous plant has been carried by horticulturalists and plant lovers around the world. Heliconia’s sculptural bracts and stunning colors (reds, oranges, and yellows) have also captivated botanical artists. A painting of two heliconias in the Dumbarton Oaks Rare Book collection by the artist Margaret Mee showcases their distinctive shape and employs the opaque medium of gouache to convey their vibrant color. Mee was intimately familiar with her subject. The Prickly Meanings of the Pineapple. The pineapple, indigenous to South America and domesticated and harvested there for centuries, was a late comer to Europe. 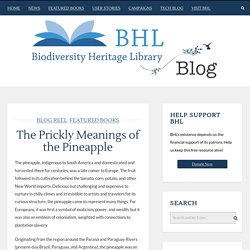 The fruit followed in its cultivation behind the tomato, corn, potato, and other New World imports. Delicious but challenging and expensive to nurture in chilly climes and irresistible to artists and travelers for its curious structure, the pineapple came to represent many things. For Europeans, it was first a symbol of exoticism, power, and wealth, but it was also an emblem of colonialism, weighted with connections to plantation slavery. Originating from the region around the Paraná and Paraguay Rivers (present-day Brazil, Paraguay, and Argentina), the pineapple was an important economic plant in the development of Indigenous civilizations in the Americas. Flowering plants may be 100 million years older than we thought. By Ibrahim Sawal Flowering plants may have evolved 250 million years ago, more than 100 million years earlier than the oldest fossilised flowers so far found. Today, flowering plants – known as angiosperms – are the most diverse group of land plants.

The oldest angiosperm fossils so far found are 135 million years old, and many researchers believe this is when the group originated. The fossil record suggests the group then became diverse by 130 million years ago. But how flowering plants became highly diverse so shortly after their emergence has long perplexed researchers, including Charles Darwin. Top 10 species new to science in 2020. Species publications Hyde, K.D., Dong, Y., Phookamsak, R. et al. (2020). Fungal diversity notes 1151–1276: taxonomic and phylogenetic contributions on genera and species of fungal taxa. Fungal Diversity 100: 5–277. Swanepoel, W., Chase, M.W., Christenhusz, M.J.M., Maurin, O., Forest, F. & van wyk, A.E. (2020). University of Oxford Botanic Garden and Arboretum. The pungency of chillies is due to a specialized metabolite, capsaicin, concentrated in tissues that surround the seeds inside the fruits.

Capsaicin content is subjectively measured using Scoville heat units (SHU), i.e., how much a chilli extract must be diluted before its ‘heat’ is undetectable. Capsaicin contents vary from absent in bell peppers through jalapeño (2,500–5,000 SHU) and habanero (100,000–350,000 SHU) to extremes such as the ‘Trinidad Moruga Scorpion’ (2,000,000 SHU). Synthetic capsaicin is used in pepper sprays. It’s Called ‘Plant-Based,’ Look It Up. The terms “vegan” and “plant-based” are often used interchangeably, but there’s a growing effort to define just what it means to follow a plant-based lifestyle. According to Brian Wendel, the founder of the “plant-based living” website Forks Over Knives, going plant-based is often “for people who are very enthusiastic about the health angle” of eating mainly whole plant foods. Reynolde Jordan, who runs a food blog called Plant-Based Vibe in Memphis, said it’s also a way to distance oneself from the rigid ideology of veganism, which calls for abstaining from animal products of all kinds.

“When you classify yourself as vegan, you’re now being watched,” said Mr. Jordan, who posts vegan recipes for dishes such as Cajun seaweed gumbo and raw beet balls along with photos of the vegetarian meals he orders on trips. Multilingual Multiscripted Plant Name Database (M.M.P.N.D.) - A showcase for Distributed databases related to plant names. The Alien Minimalism of Air Plants. Plant Records: The world's most common group of plants is... Name: Rare plantsScientific names: Far too many to mentionKnown for: Appearing the newspaper headline “Botanists fight to protect rare plant in local area.”Record broken: Biggest group of plants on the planet.

How do scientists group plants? In reality, whatever way they like, so long as it’s a useful classification. But if you come up with a group like ‘rare plants’ then you’d be hard-pressed to find a taxonomist who takes it seriously. Scientists tend to like their categories monophyletic. This means coming from a common ancestor. Sometimes paraphyletic groups are useful. An article published this year in Science Advances by Brian Enquist and colleagues says that over a third of the Earth’s plant species are ‘exceedingly rare’. The paper has some useful discussion of rarity. Rarity is a problem, as rare species are more likely to become extinct, and there were a lot of plant extinctions reported this year. Another difficulty is that some extinct plants survive in seed banks. The Mesmerizing Microscopy of Trees: Otherworldly Images Revealing the Cellular Structure of Wood Specimens. The Arizona Native Plant Society. Winter 2018. The Seedy World of Plant Poaching.

In September 2012, two conservation officers with the Ontario Ministry of Natural Resources were waiting along a dirt road in rural south-central Ontario for the poachers to emerge from the forest. The summer before, officers patrolling the area had stumbled upon a poached patch of wild American ginseng after noticing shallow holes pockmarking the ground next to discarded plants torn of their roots. On the Hunt for Unloved, Unstudied, Yet Super Important Lichen. Plant Love Stories. Specimen of the day – Atropa belladonna « Herbology Manchester. Showy Aster Guide. Family:Aster Family (Asteraceae) State Protection: Threatened. Experimental Banana. A New Species from Andhra Pradesh, India. Summary A new species of Brachystelma from the Southern Deccan plateau of Gorantla hills, Andhra Pradesh is described and illustrated. I grew 97 different types of broccoli this summer and visualized their biological diversity [OC]. : dataisbeautiful.

Camelina's varied response to environment. Cassava, cake and cyanide. Convergent Carnivores. A carnivorous lifestyle has evolved independently in numerous plant lineages. Chamomile. Cinchona and Treating Malaria. Cinnamon and Cassia, A Tangled Story. Where the Rare Citrus Grows. A history of coffee « Herbology Manchester. [OC] Crop to Cup. I grew coffee and drank it, made some notes. : dataisbeautiful. A history of cotton « Herbology Manchester. Native Fruit: Cranberry for all Seasons – Smithsonian Libraries / Unbound. Curly Cucurbits — In Defense of Plants.

Citrus in a nutshell. This is not a magnolia! - Diversification of angiosperms. Nutmeg (Myristica fragrans) — The Ethnobotanical Assembly. Oxygyne: An extraordinarily elusive flower - Thorogood - 2019 - PLANTS, PEOPLE, PLANET - Wiley Online Library. How the Grass of Parnassus got its name. Plant of the Month: Peony. How the transgenic petunia carnage of 2017 began. Power, promise, politics: the pineapple from Columbus to Del monte