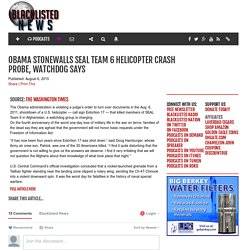 On the fourth anniversary of the worst one-day loss of military life in the war on terror, families of the dead say they are aghast that the government will not honor basic requests under the Freedom of Information Act. “It has now been four years since Extortion 17 was shot down,” said Doug Hamburger, whose Army air crew son, Patrick, was one of the 30 Americans killed. “I find it quite disturbing that the government is not willing to give us the answers we deserve. I find it very irritating that we will not question the Afghans about their knowledge of what took place that night.” U.S. Full article here﻿﻿

I’m Andrew Parker, head of MI5. We arrange for politicians to rape children and then film it so we can blackmail and control them. That makes me head of the largest paedophile network in the UK, all paid for by your taxes. Sack me Britain. Sandyhookjustice. FDA and EPA are Victims of the Government Shutdown - Is This Supposed to be a Bad Thing? Congressional War Criminals. Society under Corporate Technological Militarized Control — www.blacklistednews. The Truthseeker: 9/11 & Operation Gladio. Search Engine Manipulation. Google and YouTube Suppress 9/11 Truth? Let’s Make 9/11 Truth Go Viral Global Research is committed to Counter-propaganda. 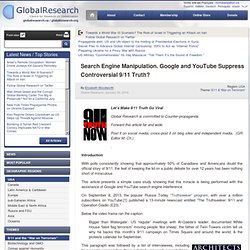 Forward this article far and wide. Post it on social media, cross-post it on blog sites and independent media. (GR Editor M. Ch.) Introduction. “The President’s Private Army“: NSA-CIA Spying is Central to Carrying Out the Obama Administration’s Assassination Program. Www.politicalaffairs.weebly.com - Page 1. Obama Laughed at When Referring to The Overwhelming Scientific Evidence on Climate Change. US Has more People in Jail than China and Russia Combined. What’s Wrong With that Picture? Majority of private prison contracts demand taxpayer-backed lockup quotas - report. Published time: September 20, 2013 03:35 AFP Photo / Justin Sullivan The majority of contracts between local US governments and for-profit prisons require “lockup quotas” and “low crime taxes,” according to a new report. 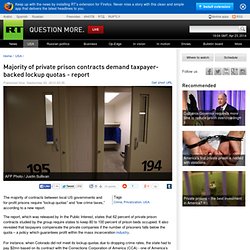 The report, which was released by In the Public Interest, states that 62 percent of private prison contracts studied by the group require states to keep 80 to 100 percent of prison beds occupied. » Seymour Hersh: Bin Laden Raid “One Big Lie” Alex Jones. Pulitzer-prize wining journalist slams “pathetic” US media for failing to challenge White House Paul Joseph Watson Infowars.com September 27, 2013 Pulitzer Prize-winning journalist Seymour Hersh says that the raid which killed Osama Bin Laden in 2011 is “one big lie” and that “not one word” of the Obama administration’s narrative on what happened is true. 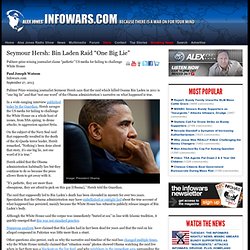 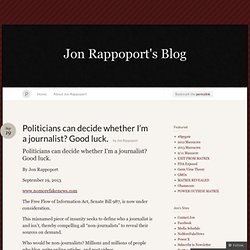 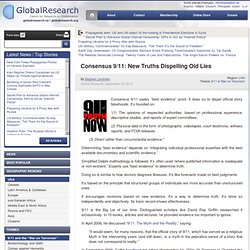 It does so to dispel official story falsehoods. It’s founded on: “(1) The opinions of respected authorities, based on professional experience, descriptive studies, and reports of expert committees. (2) Physical data in the form of photographs, videotapes, court testimony, witness reports, and FOIA releases. (3) Direct rather than circumstantial evidence.”

Judge Napolitano: If Officers at the Navy Yard Had Been Armed A Lot Fewer Would Have Been Killed. Judge Andrew Napolitano stopped by Fox and Friends this morning to discuss the Navy Yard shooting and attacker Aaron Alexis. 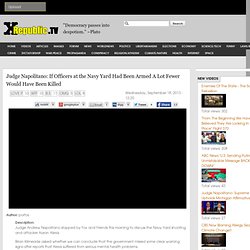 Brian Kilmeade asked whether we can conclude that the government missed some clear warning signs after reports that Alexis suffered from serious mental health problems. First response team ordered to prematurely ‘stand down’ at Navy Yard shooting - report. Sandy Hook Prosecutor: Releasing 911 Calls Could Aid Criminals. Was an Elite Police Unit Prevented From Assisting During the Navy Yard Shootings? Lily Dane The Daily Sheeple September 18th, 2013 Reader Views: 1,412 According to the BBC, one of the first teams of heavily-armed police to respond to Monday’s shooting at the Navy Yard in Washington, DC was not permitted to intervene. 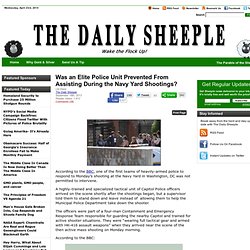 A highly-trained and specialized tactical unit of Capitol Police officers arrived on the scene shortly after the shootings began, but a supervisor told them to stand down and leave instead of allowing them to help the Municipal Police Department take down the shooter. The officers were part of a four-man Containment and Emergency Response Team responsible for guarding the nearby Capitol and trained for active shooter situations. 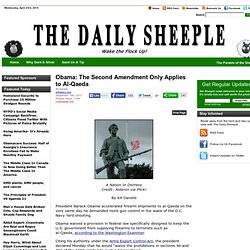 Eric Holder D.O.J "We Must Brainwash People About Guns" Dear Dianne Feinstein, You Don’t Have A Clue About the Constitution. The following is a letter that I sent to Senator Dianne Feinstein regarding her tyrannical "service" to the people of California and to the United States. 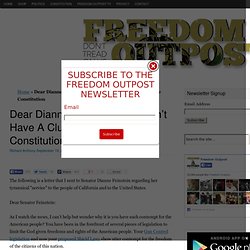 Dear Senator Feinstein: As I watch the news, I can't help but wonder why it is you have such contempt for the American people? You have been in the forefront of several pieces of legislation to limit the God given freedoms and rights of the American people. Your Gun Control legislation and now your proposed Shield Laws show utter contempt for the freedom of the citizens of this nation. President Breaks Arms Export Laws to Send Shipments to Syrian “Rebels” Source: New American The motto of the Obama administration seems to be, “He who rules the waves may waive the rules.” According to a story published by The Hill, “President Obama has waived federal regulations on U.S. arms sales to begin supplying anti-chemical weapons equipment to rebel forces in Syria.”

Under applicable (until now) provisions of the Arms Export Control Act, the president may not authorize shipment of any item included in the U.S. Where there is Government there is NO rule of law - Stefan Molyneux on Snowden and Aaron Swartz. On Fifth Anniversary of Wall Street Crash, Obama Tries the Big Lie Technique. On Monday, US President Barack Obama marked the fifth anniversary of the Wall Street crash of September 15, 2008 with a White House speech that only underscored the unbridgeable chasm that separates the entire political establishment from the broad mass of working people.