Library of Congress. GovTrack.us: Tracking the U.S. Congress. Recent Political Cartoons. Defense Contractors Give a Lot of Business to Each Other. Network map of Dept. of Defense Recovery Act contracts. Network map of Dept. of Defense related Recovery Act contracts This image depicts a network of 3000 contracts among 2700 primary funding offices, contracting corporations and subcontractors reported as receiving funds. 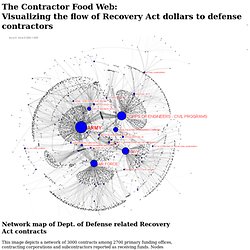 Nodes indicate organizations, The size of the nodes is relative to the current sum of payments it has made. Grey lines indicate payments, with widths proportional to the aggregate amounts. Mousing over small nodes will reveal the name of the corporation. Clicking on a contractor loads the associated contract information on the fedspending site (won't work for the big blue agency nodes) Data are Awards funded by Department of Defense (except military departments) downloaded from fedspending.org, compiled from recipient reports from Recovery.gov last released on 10/31/2009. Bill Of Rights: Mark Dice Third Amendment Video Goes Viral. A new viral video by Mark Dice illustrates how quickly some California residents are to give up their Third Amendment rights. 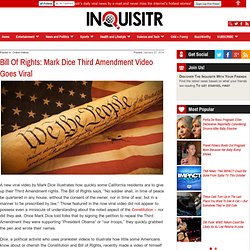 The Bill of Rights says, “No soldier shall, in time of peace be quartered in any house, without the consent of the owner, nor in time of war, but in a manner to be prescribed by law.” Those featured in the now viral video did not appear to possess even a miniscule of understanding about the noted aspect of the Constitution – nor did they ask. Once Mark Dice told folks that by signing the petition to repeal the Third Amendment they were supporting “President Obama” or “our troops,” they quickly grabbed the pen and wrote their names. Dice, a political activist who uses prankster videos to illustrate how little some Americans know about or cherish the Constitution and Bill of Rights, recently made a video of himself circulating a petition calling for the repeal of the Third Amendment. Dice is heard saying this during the viral video: Defense Advanced Research Projects Agency. Bill of Rights. Download a PDF of the Bill of Rights The first 10 amendments to the Constitution make up the Bill of Rights. 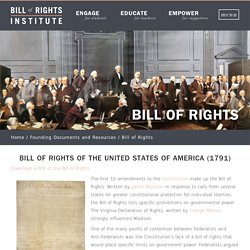 Written by James Madison in response to calls from several states for greater constitutional protection for individual liberties, the Bill of Rights lists specific prohibitions on governmental power. The Virginia Declaration of Rights, written by George Mason, strongly influenced Madison. Political corruption. World map of the 2012 Corruption Perceptions Index by Transparency International, which measures "the degree to which corruption is perceived to exist among public officials and politicians". High numbers (yellow) indicate less perception of corruption, whereas lower numbers (red) indicate higher perception of corruption.

Political corruption is the use of powers by government officials for illegitimate private gain. An illegal act by an officeholder constitutes political corruption only if the act is directly related to their official duties, is done under color of law or involves trading in influence. The activities that constitute illegal corruption differ depending on the country or jurisdiction. For instance, some political funding practices that are legal in one place may be illegal in another. Some forms of corruption – now called “institutional corruption”[2] – are distinguished from bribery and other kinds of obvious personal gain. Effects[edit] Economic effects[edit] Types[edit] Civil Rights Division Home Page. Voting rights and the Supreme Court: The impossible “literacy” test Louisiana used to give black voters. The Vault is Slate's new history blog. 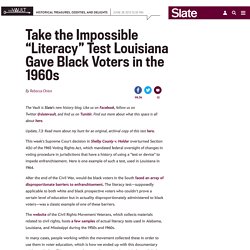 Like us on Facebook, follow us on Twitter @slatevault, and find us on Tumblr. Find out more about what this space is all about here. Update, 7.3: Read more about my hunt for an original, archival copy of this test here. This week’s Supreme Court decision in Shelby County v. Holder overturned Section 4(b) of the 1965 Voting Rights Act, which mandated federal oversight of changes in voting procedure in jurisdictions that have a history of using a “test or device” to impede enfranchisement. After the end of the Civil War, would-be black voters in the South faced an array of disproportionate barriers to enfranchisement. The website of the Civil Rights Movement Veterans, which collects materials related to civil rights, hosts a few samples of actual literacy tests used in Alabama, Louisiana, and Mississippi during the 1950s and 1960s.