Robert Murphy on Why Government Can't Run Like a Business, David Henderson. We often hear people, including businessmen, lament the fact that the government doesn't seem to be run like a business. 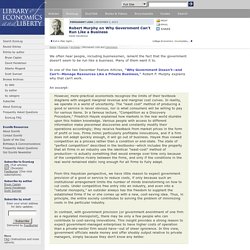 Many of them want it to. In one of the two December Feature Articles, "Why Government Doesn't--and Can't--Manage Resources Like a Private Business," Robert P. Murphy explains why that can't work. Combating gridlock by tying Congress to the mast. In a dynamic new paper, Ulysses goes to Washington: Political myopia and policy commitment devices, Richard Reeves offers a means to overcome the gridlock strangling American politics and policymaking. 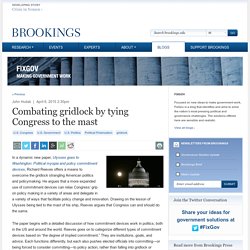 He argues that a more expanded use of commitment devices can relax Congress’ grip on policy making in a variety of areas and delegate in a variety of ways that facilitate policy change and innovation. Drawing on the lesson of Ulysses being tied to the mast of his ship, Reeves argues that Congress can and should do the same. The paper begins with a detailed discussion of how commitment devices work in politics, both in the US and around the world. Reeves goes on to categorize different types of commitment devices based on “the degree of implied commitment.” They are institutions, goals, and advice. Www.planning.org/ncpm/pdf/UrbanPlannerExcerpt.pdf. Overview - City Budget - City Finances. NIEM - A Model for Sharing Government Information. High Five to Boulder, CO! The City Unveils 2015 Budget Based Upon 5th Straight Year of Priority Based Budgeting!

"Priority based budgeting contributes to the city's long-term financial sustainability and allows the City of Boulder to serve its residents in the most effective, efficient and fiscally responsible manner possible. 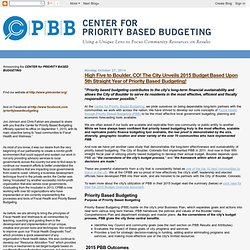 " At the Center for Priority Based Budgeting, we pride ourselves on being dependable long-term partners with the communities we work with across the nation. We have strived to develop our core concepts of Fiscal Health through Priority Based Budgeting (PBB) to be the most effective local government budgeting, planning and economic forecasting tools available. For the sake of our cities, it's time to make town planning cool again. British cities are in crisis, but it is of an unusual and distinctly 21st-century form. 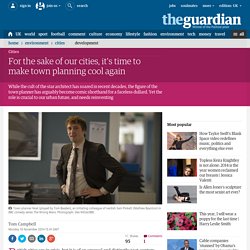 Thirty years ago, the populations of London, Manchester and Glasgow were all in decline as city leaders struggled with deindustrialisation and inner city no-go areas. Economists wondered what the purpose of a city actually was. Today, the UK seems to be facing almost the opposite problem. Global powerhouses in finance and business services, the world’s major cities are suffering not from a deficit but an abundance of private capital, speculative development and foreign investment in property. Housing associations and charities repeatedly call for more social housing. Arguably, it is not British cities that are in crisis so much as its planning system and planners. Local government funding cuts, pay freezes and redundancies of the last few years have wrought their work, but a deeper malaise has set in. One might expect town planners to be derisory figures for the libertarian rightwing.

Emerging Local Government Leaders Network - Innovative Local Government Networking. Manchester England England: Devolution U.K. Style. For decades, the United Kingdom has been notorious for having one of the most centralized systems of government among developed nations. 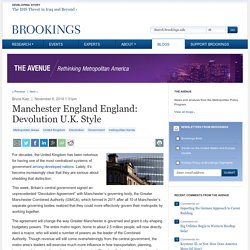 Lately, it’s become increasingly clear that they are serious about shedding that distinction. This week, Britain’s central government signed an unprecedented “Devolution Agreement” with Manchester’s governing body, the Greater Manchester Combined Authority (GMCA), which formed in 2011 after all 10 of Manchester’s separate governing bodies realized that they could more effectively govern their metropolis by working together. The agreement will change the way Greater Manchester is governed and grant it city-shaping budgetary powers. The entire metro region, home to about 2.5 million people, will now directly elect a mayor, who will wield a number of powers as the leader of the Combined Authority. Even though the United States is much more devolved than Britain, we should take note of the U.K.’s purposeful strides toward metro empowerment. Www.thersa.org/__data/assets/pdf_file/0009/1548090/Final-Report-Unleashing-Metro-Growth.pdf. 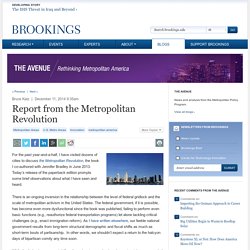 Today’s release of the paperback edition prompts some brief observations about what I have seen and heard. There is an ongoing inversion in the relationship between the level of federal gridlock and the scale of metropolitan activism in the United States. The federal government, if it is possible, has become even more dysfunctional since the book was published, failing to perform even basic functions (e.g., reauthorize federal transportation programs) let alone tackling critical challenges (e.g., enact immigration reform). As I have written elsewhere, our feeble national government results from long-term structural demographic and fiscal shifts as much as short-term bouts of partisanship. How Washington made itself irrelevant. 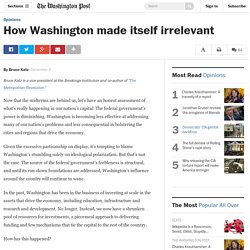