Administration declines to condemn Turkey calling Israel a ‘terrorist state’ The Obama administration won't say whether or not it agrees with the Turkish prime minister, who said today that Israel is a "terrorist state" that "massacres small children. 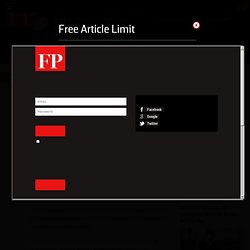 " The State Department's refusal to comment on the statements by Turkish Prime Minister Recep Tayyip Erdogan laid bare the administration's constrained ability to publicly criticize allies like Turkey, which have been injecting themselves into the ongoing conflict between the Israeli government and Hamas in Gaza. State Department reporters got into a heated exchange with State Department spokeswoman Victoria Nuland at Monday's press briefing over Nuland's refusal to condemn the remarks. "When the leaders of Turkey come out and say that Israel is engaged in acts of terrorism and you refuse to say that you don't agree with that -- or maybe you do agree with it -- that's being silent," AP reporter Matt Lee pressed Nuland.

"Because I'm not going to get into a public spitting match with allies on either side. Sens. Federal Court: Hobby Lobby must violate its faith and pay for abortion-pills. Becket Fund Appeals For Immediate Release: November 19, 2012Media Contact: Emily Hardman, ehardman@becketfund.org, 202.349.7224 WASHINGTON, DC – Today, a federal court denied a request to halt enforcement of the abortion pill mandate which forces the Christian-owned-and-operated Hobby Lobby Stores, Inc., to providethe “morning after pill” and “week after pill” in their health insurance plan, or face crippling fines up to $1.3 million dollars per day. 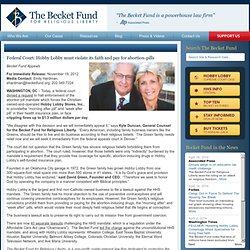 “We disagree with this decision and we will immediately appeal it,” says Kyle Duncan, General Counsel for the Becket Fund for Religious Liberty. “Every American, including family business owners like the Greens, should be free to live and do business according to their religious beliefs. The Green family needs relief now and we will seek it immediately from the federal appeals court in Denver.” The court did not question that the Green family has sincere religious beliefs forbidding them from participating in abortion.

Additional Information: Graham to Obama: I hold you responsible for Benghazi. The war of words over Benghazi escalated Wednesday when President Obama told his critics to “go after me” rather than Ambassador Susan Rice. 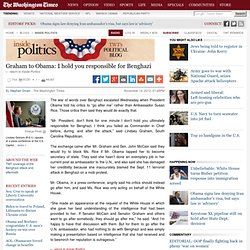 Those critics then said they would do exactly that. “Mr. President, don’t think for one minute I don’t hold you ultimately responsible for Benghazi. I think you failed as Commander in Chief before, during, and after the attack,” said Lindsey Graham, South Carolina Republican. The exchange came after Mr. Mr. “She made an appearance at the request of the White House in which she gave her best understanding of the intelligence that had been provided to her. House Democrats Inch Closer to Becoming a Two-State Caucus - Smart Politics.

Californians and New Yorkers will comprise a record percentage of the Democratic caucus when the 113th Congress convenes in January at nearly 30 percent Although gains by Democrats were modest in 2012 U.S. 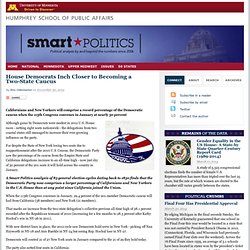 House races - netting eight seats nationwide - the delegations from two coastal states still managed to increase their ever-growing influence on the party. For despite the State of New York losing two seats due to reapportionment after the 2010 U.S. Census, the Democratic Party saw the percentage of its caucus from the Empire State and California delegations increase to an all-time high - now just shy of 30 percent of the 201 seats it will hold across the country in January. A Smart Politics analysis of 83 general election cycles dating back to 1850 finds that the Democratic Party now comprises a larger percentage of Californians and New Yorkers in the U.S. Democrats will control 21 of 27 New York seats in January compared to the 21 of 29 they hold today.

Naturalization Self Test. Nikki Haley Appoints Tim Scott To Replace DeMint, Calls Choice ‘Historic’ Haley touched on the noteworthy nature of the appointment in her remarks making the announcement in Columbia, the state capital. 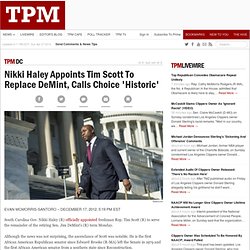 "It is a great day in South Carolina," she said. "It is an historic day in South Carolina. " But Haley, herself of South Asian descent and a prominent minority voice in the GOP, also said the appointment was a reflection on Scott, who won his seat in Congress on the back of the 2010 tea party wave. "What I will also tell you, and it is very important to me as a minority female, that Congressman Scott earned this seat. He earned this seat for the person that he is," she said. Sen.