US of A and the Land of Mao

China Is a Declining Power—and That's the Problem. Why do great powers fight great wars? 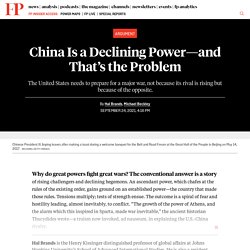 China Warns NATO It Won’t ‘Sit Back’ If Challenged by the Bloc. Pentagon campaign to recruit Vietnam as military ally against China exposed delusions of US war strategy. After convincing itself Vietnam would grant it access for missile bases against China, the Pentagon got a hard dose of reality. 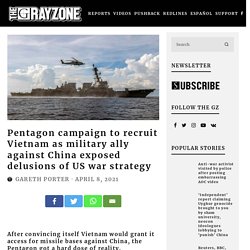 When the Pentagon began gearing up for a future war with China in 2018, Defense Department officials quickly realized that they needed access to Vietnamese territory for troops armed with missiles to hit Chinese ships in a US-China conflict. So they initiated an aggressive campaign to lobby the Vietnamese government, and even Communist Party officials, in the hope that they would eventually support an agreement to provide them the permission. China's Real Threat Is to America's Ruling Ideology. Across the political spectrum, there is widespread agreement that America must get serious about the threat posed by China. 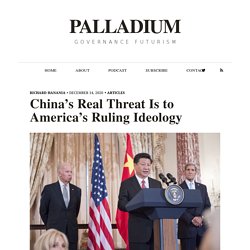 As the Trump administration comes to a close, the State Department has just released a document called ‘The Elements of the China Challenge’. A distillation of conventional wisdom among national security experts and government officials, it argues that the U.S. needs a concerted effort to push back against Beijing. US deploys aircraft carriers amid tensions with China. The Pacific region is no longer devoid of security, as two US Aircraft Carrier Strike Groups head into waters that have seemingly become infested with Chinese military activity in the wake of minimized US presence. 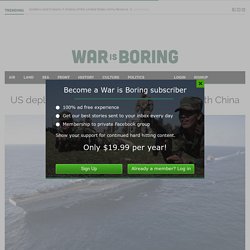 The USS Ronald Reagan and USS Nimitz deployed to the area alongside their support vessels, sending a clear message to the Chinese People’s Liberation Army Navy, which became active as US deployments slowed down due to coronavirus. The Chinese-originated virus ravaged the USS Roosevelt earlier this year, forcing a long stay in Guam. In response to diminished US presence, the Chinese deployed their single operational carrier, the Liaoning, to waters near Japan and Taiwan, respectively. 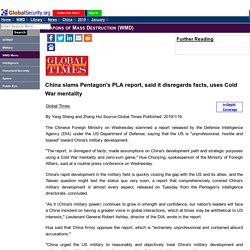 - The Washington Post. Snowden Documents Reveal Scope of Secrets Exposed to China in 2001 Spy Plane Incident. When China boldly seized a U.S. underwater drone in the South China Sea last December and initially refused to give it back, the incident ignited a weeklong political standoff and conjured memories of a similar event more than 15 years ago. 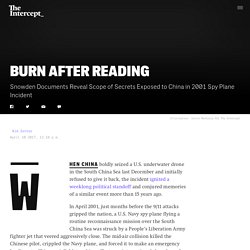 In April 2001, just months before the 9/11 attacks gripped the nation, a U.S. Navy spy plane flying a routine reconnaissance mission over the South China Sea was struck by a People’s Liberation Army fighter jet that veered aggressively close. The mid-air collision killed the Chinese pilot, crippled the Navy plane, and forced it to make an emergency landing at a Chinese airfield, touching off a tense international showdown for nearly two weeks while China refused to release the two-dozen American crew members and damaged aircraft.

The sea drone captured in December was a research vessel, not a spy craft, according to the Pentagon, so its seizure didn’t risk compromising secret military technology. Another stumbling block? A U.S. Photo: U.S. Girding for Confrontation. On May 30, 2018, Secretary of Defense James Mattis announced a momentous shift in American global strategic policy. 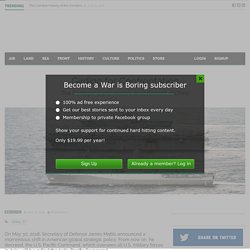 From now on, he decreed, the U.S. Pacific Command. which oversees all U.S. military forces in Asia, will be called the Indo-Pacific Command. The name change, Mattis explained, reflects “the increasing connectivity between the Indian and Pacific Oceans,” as well as Washington’s determination to remain the dominant power in both. What? You didn’t hear about this anywhere? If, until now, you hadn’t read about Mattis’s decision anywhere, I’m not surprised since the media gave it virtually no attention — less certainly than would have been accorded the least significant tweet Donald Trump ever dispatched.

What coverage it did receive treated the name change as no more than a passing “symbolic” gesture, a Pentagon ploy to encourage India to join Japan, Australia, and other U.S. allies in America’s Pacific alliance system. Why a U.S-China War Over Taiwan Won’t Be Anything Like the Syria Strikes. Great powers have a habit of intervening to shield weak allies from rival great powers and advance their own purposes. 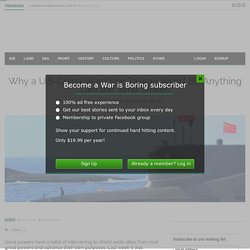 Last week it was Russia vowing to shoot down American missiles bound for Syrian chemical-weapon sites. Judging from recent Chinese words and deeds, next week could see the U.S. Navy attempting to repulse a Chinese assault on nearby Taiwan. The Chinese Communist Party depicts the island as a wayward province and has pledged to restore mainland sovereignty there—by force if necessary. As China amasses military power, improving its chances of imposing a solution at manageable cost, it may define necessary more expansively. How Not to Win an AI Arms Race With China. A lawmaker’s proposal to curb Chinese investment in U.S. artificial-intelligence firms has more than a few critics. 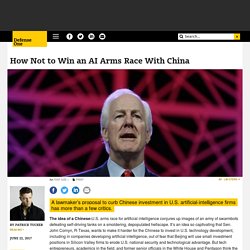 The idea of a Chinese-U.S. arms race for artificial intelligence conjures up images of an army of swarmbots defeating self-driving tanks on a smoldering, depopulated hellscape. It’s an idea so captivating that Sen. John Cornyn, R-Texas, wants to make it harder for the Chinese to invest in U.S. technology development, including in companies developing artificial intelligence, out of fear that Beijing will use small investment positions in Silicon Valley firms to erode U.S. national security and technological advantage. Afi16-118. China Syndrome. “China is reaching deep within the world island in an attempt to thoroughly reshape the geopolitical fundamentals of global power…… Its two-step plan is designed to build a transcontinental infrastructure for the economic integration of the world island from within, while mobilizing military forces to surgically slice through Washington’s encircling containment…….If China succeeds in linking its rising industries to the vast natural resources of the Eurasian heartland, then quite possibly…. 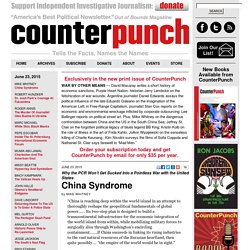 “the empire of the world would be in sight.”— Alfred McCoy, The Geopolitics of American Global Decline, The Unz Review“The future of politics will be decided in Asia, not Afghanistan or Iraq, and the United States will be right at the center of the action.”— Former Secretary of State, Hillary Clinton, “America’s Pacific Century”, Foreign Policy magazine. The “show of force” drills are designed to harass and intimidate China. They have no other purpose. There it is in a nutshell. There it is, eh?

Chinese Hackers Access Performance Reviews Of 3 Million Shitty Federal Workers. WASHINGTON – Chinese hackers were behind a massive cyber-attack that among other things accessed the performance reviews of nearly three million shitty federal workers, Duffel Blog has learned. “Most damaging was not the utter failure of our 40 billion dollar cyber security program, or access to key government organizational structures,” said Eric Mickens, a spokesman for USCYBERCOM. “Most damaging is the fact that Chinese government now knows how terrible a number of U.S. government service (GS) civilians actually are.”

The breadth of the attack which was originally detected in April was unknown until late last week. According to sources, it is believed that the Chinese intend to use the information gathered to discover the most common characteristics for the ideal spy to infiltrate the federal government. With a series of major hacks, China builds a database on Americans. China is building massive databases of Americans’ personal information by hacking government agencies and U.S. health-care companies, using a high-tech tactic to achieve an age-old goal of espionage: recruiting spies or gaining more information on an adversary, U.S. officials and analysts say. Groups of hackers working for the Chinese government have compromised the networks of the Office of Personnel Management, which holds data on millions of current and former federal employees, as well as the health insurance giant Anthem, among other targets, the officials and researchers said.

“They’re definitely going after quite a bit of personnel information,” said Rich Barger, chief intelligence officer of ThreatConnect, a Northern Virginia cybersecurity firm. “We suspect they’re using it to understand more about who to target [for espionage], whether electronically or via human ­recruitment.” China's Island-Building Undermines Regional Security, U.S. Defense Secretary Says.

By David Alexander and Rachel Armstrong SINGAPORE, May 30 (Reuters) - U.S. Defense Secretary Ash Carter said on Saturday that China's island-building in the South China Sea was undermining security in the Asia-Pacific, drawing a scathing response from the foreign ministry in Beijing. The South China Sea Word War. As Cold War 2.0 between the U.S. and Russia remains far from being defused, the last thing the world needs is a reincarnation of Bushist hawk Donald “known unknowns” Rumsfeld.

Instead, the — predictable — “known known” we get is Pentagon supremo Ash Carter. Neocon Ash threw quite a show at the Shangri-La Dialogue this past weekend in Singapore. Beijing is engaged in reclamation work in nine artificial islands in the South China Sea; seven in the atolls of the Spratlys, and two others in the Paracel archipelago. Ash virtually ordered Beijing to put an “immediate and lasting halt” to the expansion; accused it of behaving “out of step” with international norms; and capped the show by flying over the Strait of Malacca out of Singapore in a V-22 Osprey.

Why is Obama Goading China? US Secretary of Defense Ashton Carter is willing to risk a war with China in order to defend “freedom of navigation” in the South China Sea. Speaking in Honolulu, Hawaii on Wednesday, Carter issued his “most forceful” warning yet, demanding “an immediate and lasting halt to land reclamation” by China in the disputed Spratly Islands. Carter said: “There should be no mistake: The United States will fly, sail, and operate wherever international law allows, as we do all around the world.”

Target:? Call Sign 'Rogue': Pentagon Says One Chinese Commander Responsible for Spate of Air Confrontations. The Past’s Dead Hand. China Thinks Hillary Is Bossy. China News, China Business News, Taiwan and Hong Kong News and Business. China Cyberwar and Real War. Hacking China. Looks Like the US Government was Behind 2012 Anonymous Cyber-Attacks on Chinese Websites On April 23, Mark Mazzetti reported in the New York Times that the FBI had used Hector Xavier Monsegur, a hacker it had in its clutches, to coordinate hacks in 2012 against Iran, Syria, Brazil, and Pakistan, and other targets.

America’s “Pivot to Asia” Threatens China: US Stages Show of Naval Force in South China Sea War Games. Surrounded: How the U.S. Is Encircling China with Military Bases. The U.S. military is encircling China with a chain of air bases and military ports. How Guantanamo affects China: Our human rights hypocrisies. In May 2012, Secretary of State Hillary Clinton and Secretary of Treasury Timothy Geithner were poised to make a rare double visit to China for a high-level strategic and economic dialogue. China’s Glass Ceiling - By Geoff Dyer. Powering the Pacific “Pivot” With Leon and Chuck. The pivot to Asia and the urgent fight against waterborne IEDs.

US election: Kernels of truth in "China bashing" America’s Strategy To Destabilize the Asia-Pacific Region. Radar sent to Japan can track anti-ship missiles. Everything You Think You Know About China Is Wrong - By Minxin Pei. 5 Things the Pentagon Isn't Telling Us About the Chinese Military - By Trefor Moss. Www.defense.gov/pubs/pdfs/2012_CMPR_Final.pdf.