Mao looks beyond the Shores

Why China Will Never Put America First. Supporters of Taiwan have experienced both elation and dejection in recent months as President Donald Trump first seemed prepared to embrace the democratic island-nation only to turn around and instead engage in a romance with Chinese president Xi Jinping. 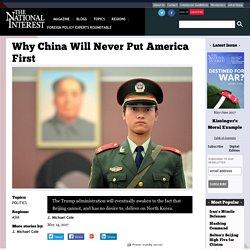 The initial optimism resulted in large part from Trump’s campaign rhetoric, which promised a much more rigid line on China and an end to President Obama’s supposedly “weak” way of dealing with the authoritarians in Beijing on issues from currency manipulation to territorial expansion, human rights to cyber espionage. For those who regard geopolitics as a zero-sum game between states, this stance held the promise of creating more space and opportunities for Taiwan. That enthusiasm was reinforced soon after Trump’s election in November. How Good Is China's New J-20 Stealth Fighter? China's first stealth fighter, the Chengdu J-20, "has the potential to provide China with a variety of previously unavailable air combat options and enhance its capability to project power. 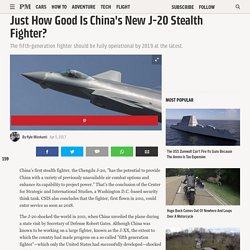 " That's the conclusion of the Center for Strategic and International Studies, a Washington D.C. -based security think tank. CSIS also concludes that the fighter, first flown in 2011, could enter service as soon as 2018. Advertisement - Continue Reading Below. Here’s How China Will Test Trump With North Korean Nukes. China is demanding South Korea not defend itself from North Korean missiles and nuclear weapons, which Beijing has helped Pyongyang develop. 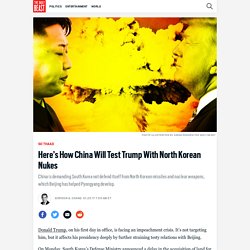 Donald Trump, on his first day in office, is facing an impeachment crisis. It’s not targeting him, but it affects his presidency deeply by further straining testy relations with Beijing. On Monday, South Korea’s Defense Ministry announced a delay in the acquisition of land for the Terminal High Altitude Area Defense system, designed to shoot down incoming missiles. The timetable for this preliminary step “may be pushed back a bit,” said ministry spokesman Moon Sang-gyun. Last July, South Korea’s President Park Geun-hye, after months of deliberation and over the strenuous objections of China, agreed to deploy THAAD, as the Lockheed Martin system is known, to defend against the threat of North Korean missiles that could carry nuclear warheads.

Mao: Monster or Model? The world’s premier business newspaper the Financial Times (Japanese owned) has the answer: Mao was the worst ever. 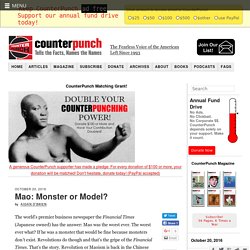 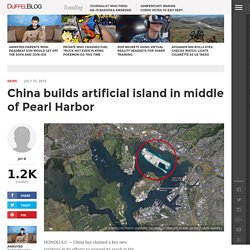 The presence of Chinese dredging crews on a shoal in the middle of the U.S. Navy’s Pacific Fleet headquarters was first reported to Naval Intelligence in early February. But the information was not shared with the Chief of Naval Operations, the Secretary of Defense, or the State Department because the Chief of Naval Intelligence was not told about it because he doesn’t actually have a security clearance. Adm. Harry B. “Secretary of State Kerry has assured me his office is working on a ‘sternly worded’ note,” Harris said.

China to send nuclear-armed submarines into Pacific amid tensions with US. The Chinese military is poised to send submarines armed with nuclear missiles into the Pacific Ocean for the first time, arguing that new US weapons systems have so undermined Beijing’s existing deterrent force that it has been left with no alternative. 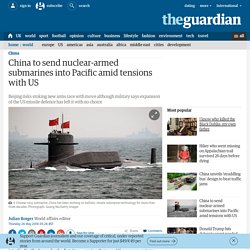 Chinese military officials are not commenting on the timing of a maiden patrol, but insist the move is inevitable. They point to plans unveiled in March to station the US Thaad anti-ballistic system in South Korea, and the development of hypersonic glide missiles potentially capable of hitting China less than an hour after launch, as huge threats to the effectiveness of its land-based deterrent force. A recent Pentagon report to Congress predicted that “China will probably conduct its first nuclear deterrence patrol sometime in 2016”, though top US officers have made such predictions before. Deploying nuclear-armed submarines would have far-reaching implications. Missile defence is not their only worry. China's Newest Military Recruitment Video Is Ridiculously Intense.

These Vintage Propaganda Posters Show A Past China Wants To Ignore. The Chinese Submarine Threat. There has been extensive debate in recent years about modern Chinese anti-access/area-denial (A2/AD) systems rendering the aircraft carriers of the United States Navy (USN) highly vulnerable if Beijing and Washington were to clash in the western Pacific. 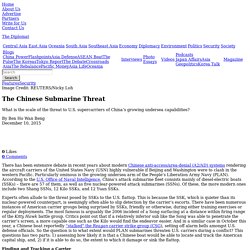 Particularly ominous is the growing undersea arm of the People’s Liberation Army Navy (PLAN). According to the U.S. Office of Naval Intelligence, China’s attack submarine fleet consists mainly of diesel-electric boats (SSKs) ­– there are 57 of them, as well as five nuclear-powered attack submarines (SSNs). Of these, the more modern ones include two Shang SSNs, 12 Kilo SSKs, and 12 Yuan SSKs. Experts often allude to the threat posed by SSKs to the U.S. flattop. The American empire is over: Afghanistan, China and our new bystander status. Call it an irony, if you will, but as the Obama administration struggles to slow down or halt its scheduled withdrawal from Afghanistan, newly elected Afghan President Ashraf Ghani is performing a withdrawal operation of his own. 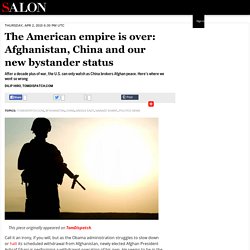 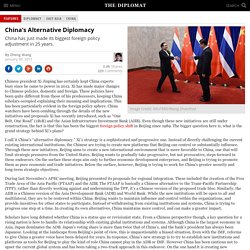 Xi has made major changes to Chinese policies, domestic and foreign. These policies have been quite different from those of his predecessors, keeping China scholars occupied explaining their meaning and implications. Religious sects: No-cult zone. Doing Christ’s brother’s work ON AUGUST 21st five members of a banned religious sect known as the Church of the Almighty God went on trial for a murder that has gripped the country. 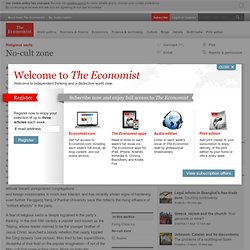 One evening in May, in front of stunned customers at a McDonald’s in the eastern city of Zhaoyuan, in Shandong province, the suspects allegedly beat to death a woman who had refused to give them her phone number. The brutal attack was caught on smartphone video, which spread virally online. A Prosperous China vs An Imperial US. As we have known at least since Thucydides military power flows from economic power.

That is also true of “soft” power, scientific discovery and technological achievement and capacity. (This week USA Today carries a story on the rapid growth of new and original patents in China., alarming the Pentagon.) Growth in China’s economic power therefore closes the door on US global hegemony. The only way for the U.S. to maintain the hope of such hegemony is for China to change course and accept a lesser standard of living. But China will not accept such second class status voluntarily. If China's Airspace Grab Turns Violent, Here's How the Dogfight Could Go Down.

Last week China announced a new air defense identification zone over the East China Sea, basically insisting it's in charge of the airspace over the disputed Senkaku Islands claimed by Japan. Japan and the United States said they would not recognize the ID zone and promptly sent in warplanes to underscore the point. U.S. B-52 bombers flew over the Senkakus, practically inviting a Chinese intervention. China outsmarted US in Snowden affair, experts say. Beijing interceded to allow whistle-blower Edward Snowden's dramatic flight from Hong Kong, calculating that infuriating the United States for now was necessary to prevent deeper corrosion in their relationship, analysts and media said yesterday.

And Beijing exploited the cyberspying revelations to put the US on the back foot. State media called Washington a villain for its alleged hacking of Chinese targets, when the United States has long portrayed itself as a victim of Chinese cybersnooping. The Hong Kong government insisted that its decision to let the 30-year-old Snowden fly out on Sunday was governed strictly by the law, after a provisional US arrest warrant purportedly failed to meet its judicial requirements. But for many observers, such a high-profile case - carrying the potential to destabilise Sino-US ties for years if Snowden had fought a lengthy legal battle in Hong Kong - must have provoked intense interest among the city's overseers.

Agence France-Presse, Reuters. Can China's Top Guns Fly? - By John Garnaut. The Chinese Air Force plane drifted past a city and seemed to float, like a leaf, before exploding onto a mudflat where the Shandong peninsula juts out into the Yellow Sea. "It was floating, floating, floating then BANG, suddenly hit the ground," says a witness, according to video footage of the smoking wreckage on March 31 that was anonymously uploaded on the Chinese version of YouTube. The huge plume of black smoke, still billowing from the wreckage 20 minutes after it exploded, suggests the tanks were full and the accident occurred not long after takeoff, probably from Jinan, the provincial capital. Perhaps there had been a fuel blockage on one of the external wing tanks, leading to a weight imbalance that contributed to the Soviet-made Su-27 20 entering a flat spin before descending like a kite to earth, according to retired and serving Air Force officers.

Crashes happen, even to the United States. Pilots are neither trusted nor properly trained. Is This China's New Design for a Stealth Bomber? - An FP Slideshow. You're looking at what some people are speculating is China's design for a stealth bomber. It may look like a simple model right now. Pic of the day: Close up of China's J-31 stealth fighter. The World’s Largest Landing Craft Air Cushion(LCAC) Vehicle: China’s Amphibious Game Changer? Pentagon: The Chinese stole our newest weapons. China War Games: Army To Conduct Its First Digital Technology Military Exercise. Spy Sat Calibrators? King-Sized Jokes? China's Colossal Structures Confound.

It's happening. Limited flight operations appear to have begun aboard China's new aircraft carrier, Liaoning. A couple of weeks ago, Killer Apps pointed out that someone made tire skidmarks on the ship's flight deck just before its commissioning ceremony. The Empire Trapped. Editors representing many Asian newspapers stood in a perfect line. China in Revolt. Inside China: Missile defense conspiracy? Rear Adm. Yin Zhuo, a leading Chinese navy official, told his nation Aug. 24 that plans to boost U.S. missile defenses in Asia are a strategic conspiracy to trick other nations in the region into investing vast resources to develop nuclear and ballistic weapons. Adm.