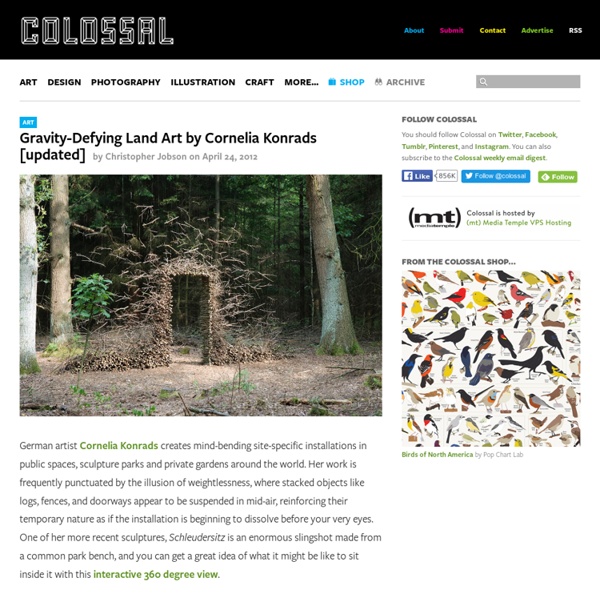 German artist Cornelia Konrads creates mind-bending site-specific installations in public spaces, sculpture parks and private gardens around the world. Her work is frequently punctuated by the illusion of weightlessness, where stacked objects like logs, fences, and doorways appear to be suspended in mid-air, reinforcing their temporary nature as if the installation is beginning to dissolve before your very eyes. One of her more recent sculptures, Schleudersitz is an enormous slingshot made from a common park bench, and you can get a great idea of what it might be like to sit inside it with this interactive 360 degree view. What you see here only begins to sratch the surface of Konrad’s work. You can see much more on her website. All imagery courtesy the artist. Update: Post updated 10/18/2016 with new photography.

Book Igloo Home is a recent sculptural installation by Colombian artist Miler Lagos. The piece was constructed at MagnanMetz Gallery late last year using carefully stacked books to create a compact dome that is entirely self-supporting. (via chris moore, thanks megan) Starry Night: Light Installations by Lee Eunyeol Photographer Lee Eunyeol constructs elaborate light installations that appear as if the night sky was flipped upside down with glowing stars and planets nested inside tall grass or between deep earthen cracks. Though Lee does not have a website I can quote his artist statement I received via email: Starry night expresses private spaces given by night and various emotions that are not able to be defined and described in the space. I’ve chosen analogue type for the expression which attempts to install electric bulbs in an objet to be expressed using back space of night by taking advantage of huge studio. There are two spaces in photographs. One is a space before electric bulbs of familiar landscape are installed and the other is a space after electric bulbs expressed by dispersing personal emotion are installed.

Most Amazing Miniature Food Artworks by Shay Aaron Shay Aaron is a brilliant artist from Israel who makes the most astonishing miniature food jewelry. These foodstuffs look so beautiful that we would desire to eat them. Actually, there’s a whole market out there for miniature food. Not actual stuff you can eat, but beautifully hand made designs of steaks, burgers, pies, vegetables, eggs and pretty much food artworks you can think of. Comments Illuminated Cut Paper Light Boxes by Hari & Deepti Deepti Nair and Harikrishnan Panicker (known collectively as Hari & Deepti) are an artist couple who create paper cut light boxes. Each diorama is made from layers of cut watercolor paper placed inside a shadow box and is lit from behind with flexible LED light strips. The small visual narratives depicted in each work often play off aspects of light including stars, flames, fireflies, and planets.

Figurative Willow Branch Sculpture by Olga Ziemska Stillness in Motion is a sculpture by Cleveland-based artist Olga Ziemska that was installed in 2003 at the Centre of Polish Sculpture in Oronsko, Poland. The piece is made entirely from cut willow branches that have been cut and stacked to create a human figure. (via junk culture, devid sketchbook)

A Beached Whale in the Forests of Argentina Argentinean sculptor Adrián Villar Rojas creates enormous sculptural works that seem like remnants of a science fiction movie set, or bizarre moments from a surreal dream. One of my favorite pieces is My Family Dead (2009), in which he created a life-size blue whale in the woods outside Ushuaia, Argentina. The beached cetacean is pockmarked with tree stumps, making me wonder if it’s being slowly claimed by the forest or perhaps it’s a native resident. Beautiful. (via devid sketchbook)

River Wharfe Reflections" by Nick Atkin The River Wharfe is a river in Yorkshire, England. For much of its length it is the county boundary between West Yorkshire and North Yorkshire. The name Wharfe is Celtic and means "twisting, winding". The valley of the River Wharfe is known as Wharfedale. The river source is at Beckermonds, Langstrothdale in the Yorkshire Dales National Park and flows through Kettlewell, Grassington, Bolton Abbey, Addingham, Ilkley, Burley-in-Wharfedale, Otley, Wetherby and Tadcaster. It then flows into the River Ouse near Cawood. Cut Leaf Illustrations for ‘Plant for the Planet’ A wonderfully executed ad campaign by Legas Delaney for Plant for the Planet, using cut leaves symbolizing their ability to absorb CO2. Beautiful work. (via inspire me now and ads of the world)