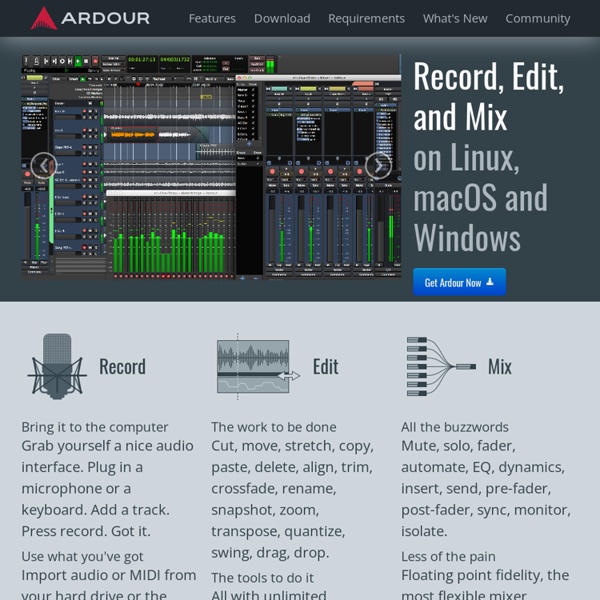 Record Bring it to the computer Grab yourself a nice audio interface. Plug in a microphone or a keyboard. Add a track. Press record.

Ripping Vinyl with GNU/Linux Recently my Dad started sending me pieces of his vinyl record collection. He has a ton of good stuff from Led Zeppelin to The Beatles and everything in between from 65'-75'. My plan is to archive all the albums to my computer and do some other fancy things with them like converting each track to an MP3, allowing for easy distribution via CD or over the Internet. Below is the process that I used after doing many hours of research on and off line. MuseScore History[edit] The MuseScore.org website was created in 2008,[2] and showed great results with a spike in the number of MuseScore downloads. By December 2008, the download rate was up to 15,000 monthly downloads. Version 0.9.5 was released in August 2009, which was stable enough for daily or production use, and support for Mac OS X was added.[3] By October 2009, MuseScore had been downloaded more than 1000 times per day.[4] By the fourth quarter of 2010, the number of MuseScore daily downloads had tripled. MuseScore 1.0 was finally released in February 2011.

Scratching - DJ Techniques Thanks for your help :D Baby Edit 10 awesome ways to use a USB flash drive Your trusty USB flash drive is much more versatile than you might realize, packing capabilities that go well beyond storing and transferring files. These little-known tricks can be utilized by computer newbies and technogeeks alike to achieve anything from restoring a virus-ridden computer to launching and playing portable apps right from the drive. Unlock our top-10 ways to use a USB flash drive with the guide below. On Subtlety Meghan O’Gieblyn | Interior States | Anchor | October 2018 | 13 minutes (6,551 words) In ancient Rome, there were certain fabrics so delicate and finely stitched they were called subtilis, literally “underwoven.” The word—from which came the Old French soutil and the English subtle—often described the gossamer-like material that was used to make veils. I think of organza or the finest blends of silk chiffon, material that is opaque when gathered but sheer when stretched and translucent when held up to the light. Most wedding veils sold today use a special kind of tulle called “bridal illusion,” a term I’ve always loved, as it calls attention to the odd abracadabra of the veil, an accoutrement that is designed to simultaneously reveal and conceal.

Akai MPK49 Pad Modification A few years ago I did a light review of the Akai MPK49 MIDI keyboard controller. Subsequently I bought one and I've been happily using it since. However one thing consistently bugged me (and everyone else) about the design - the drum "pads" are terrible. Ecology - ClipArt Best We use cookies to personalise content and ads and to analyse our traffic. We also share information about your use of our site with our advertising and analytics partners who may combine it with other information you’ve provided to them or they’ve collected from your use of their services. Learn more Close Popularity

Potpourri February 11, 2019 When I was twenty I lived in a studio apartment near downtown Lincoln, Nebraska. Rent was $350, and it had shag carpet and a window that faced a gas station parking lot and beyond that, the courthouse. I had piles of magazines: Us Weekly, Vogue, Teen Vogue, W, Glamour, Jane, Vanity Fair, Harper’s, Zoetrope, Poetry, The Believer. 47 Sites Every Recording Musician Should Visit In a recent “Open Mic” we asked you, “Which music-related sites do you visit regularly?” This article is a summary of the great suggestions given in the comments to that article. You can make the list even longer by commenting on this article. As you’re reading this article, Audiotuts+ needs no introduction. Several commenters mentioned Audiotuts+ - thanks for the support!

Meet the Former Cook Who Draws His Every Meal A marbled slice of tonkotsu pork rests on a bed of yellow noodles, nestled next to three shiny green sheets of nori, some boiled spinach, and a few shreds of kikurage, or wood-ear mushroom. A pair of disposable chopsticks raises a tangle of noodles above the red bowl, as if headed to a waiting mouth just off the edge of the page. A description of the meal is printed next to the drawing, along with the price, date, and source: Family Mart, a Japanese convenience store. Itsuo Kobayashi draws what he eats every single day. The Mindset Lists of American History The Mindset List has delighted millions for over a decade about what has “always” or “never” been true for entering college students. It was created at Beloit College in 1998 to reflect the world view of entering first year students, and started with the members of the class of 2002, born in 1980. What started as a witty way of saying to faculty colleagues “watch your references,” has turned into a globally reported and utilized guide to the intelligent if unprepared adolescent consciousness.

eMusic expands MP3 store with Warner agreement eMusic is a solid place to purchase and download music. They've always had a great catalog of music that is "off the beaten path," as well as recordings of live performances. Their catalog is about to get even larger: eMusic has finally reached an agreement with Warner Music and will be adding around 10,000 new albums. No, those new albums won't include current popular music - that's something which has long been a knock against eMusic. But it will mean even more bargain-priced, restriction-free music to choose from. There are two key features I've always liked about eMusic.

How to make a line chart race visualization The world has gone crazy for bar chart race visualizations. Since we launched that template a few months ago, inspired by a chart by the FT’s John Burn-Murdoch, loads of people have made fun and engaging animated graphics with it. So today we’re unveiling a follow-on template. Drumroll … the line chart race! The line chart race builds on our long-standing “Horserace” template, but adds a cool new feature: instead of the axes being fixed, you can now turn on the “zoomed” view to keep the dots representing the competitors in the centre while the axes animate in the background. This adds the same kind of dynamism that makes bar chart races so popular – and it also helps when displaying a long time series on a narrow mobile screen.