Land use and land management to March 2012 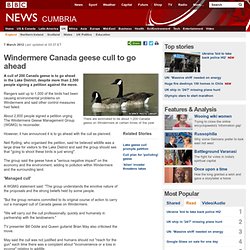 New Zealand court halts Chinese dairy deal. Planning reform critics 'to be disappointed by review' 6 March 2012Last updated at 18:28 ET By Allegra Stratton Political editor, BBC Newsnight Remember that battle the government had with the National Trust where it seemed to find itself very uncomfortably on the wrong side of the silent majority whose idea of Sunday afternoon fun is a stately home, afternoon tea and trip to the gift shop? 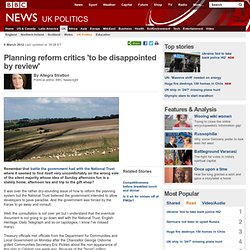 It was over the rather dry-sounding issue of how to reform the planning system but the National Trust believed the government intended to allow developers to pave paradise. And the government was forced by the fracas to go away and consult. Well, the consultation is not over yet but I understand that the eventual document is not going to go down well with the National Trust, English Heritage, Daily Telegraph and so on (apologies, I know I've missed many). Now sources say it is "highly unlikely" the new document is going to please its critics.

The Treasury is very bullish about this timing issue right now. In Brazil, Protection of Amazon Rainforest Takes a Step Back. Rural Land Grabs. In Liberia, a Nobel Laureate’s Problem. ON Monday, President Ellen Johnson Sirleaf was inaugurated for a second term. She is often depicted in the press as a postwar leader successfully rebuilding a country destroyed by decades of conflict.

For her many admirable accomplishments, she recently shared the Nobel Peace Prize. However, unbeknown to many outside Liberia, Mrs. Johnson Sirleaf’s government may now be sowing the seeds of future conflict by handing over huge tracts of land to foreign investors and dispossessing rural Liberians. Between 2006 and 2011, Mrs. 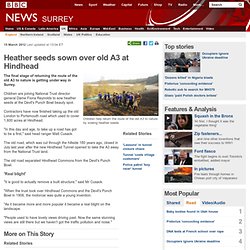 Children are joining National Trust director general Dame Fiona Reynolds to sow heather seeds at the Devil's Punch Bowl beauty spot. Contractors have now finished taking up the old London to Portsmouth road which used to cover 1,600 acres at Hindhead. "In this day and age, to take up a road has got to be a first," said head ranger Matt Cusack. Landscape and the Internet - 9 Papers in Future Internet Special Issue. Severe Drought, Other Changes Can Cause Permanent Ecosystem Disruption. An eight-year study has concluded that increasingly frequent and severe drought, dropping water tables and dried-up springs have pushed some aquatic desert ecosystems into “catastrophic regime change,” from which many species will not recover. 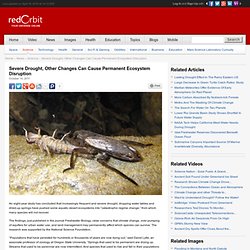 The findings, just published in the journal Freshwater Biology, raise concerns that climate change, over-pumping of aquifers for urban water use, and land management may permanently affect which species can survive. The research was supported by the National Science Foundation. “Populations that have persisted for hundreds or thousands of years are now dying out,” said David Lytle, an associate professor of zoology at Oregon State University. “Springs that used to be permanent are drying up. Streams that used to be perennial are now intermittent. “Before 2004, this area was like a beautiful oasis, with lots of vegetation, birds and rare species,” Lytle said. “It´s like comparing old-growth forests to second-growth forests,” Lytle said.

Hands Off Our Land: ordinary countryside to get more protection in revised planning rules. Media Centre: Satellite technology yields new forest loss estimates. The world lost nearly ten hectares of forest per minute between 1990 and 2005. 30 November 2011, Rome - A new, satellite-based survey released by the UN Food and Agriculture Organization (FAO) provides a more accurate picture of changes in the world's forests, showing forest land use declined between 1990 and 2005. 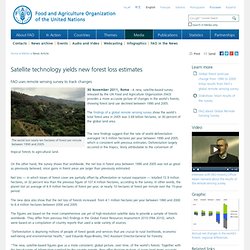 The findings of a global remote sensing survey show the world's total forest area in 2005 was 3.69 billion hectares, or 30 percent of the global land area. The new findings suggest that the rate of world deforestation averaged 14.5 million hectares per year between 1990 and 2005, which is consistent with previous estimates. Smart meter project is delayed. 10 May 2013Last updated at 08:33 ET Smart meters show customers how much gas and electricity is being used The introduction of energy smart meters in 30 million UK homes will be delayed for more than a year, the government has announced. 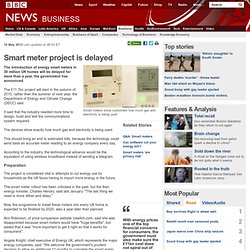 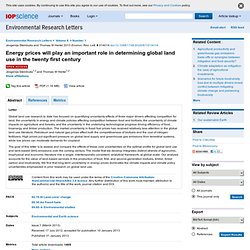 The market uncertainty in fossil fuel prices has received relatively less attention in the global land use literature. Petroleum and natural gas prices affect both the competitiveness of biofuels and the cost of nitrogen fertilizers. High prices put significant pressure on global land supply and greenhouse gas emissions from terrestrial systems, while low prices can moderate demands for cropland.