Competition, the Coronavirus, and the Weakness of Xi Jinping. Data Leviathan: China’s Burgeoning Surveillance State. Classical totalitarianism, in which the state controls all institutions and most aspects of public life, largely died with the Soviet Union, apart from a few holdouts such as North Korea. 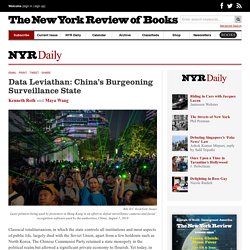 The Chinese Communist Party retained a state monopoly in the political realm but allowed a significant private economy to flourish. Yet today, in Xinjiang, a region in China’s northwest, a new totalitarianism is emerging—one built not on state ownership of enterprises or property but on the state’s intrusive collection and analysis of information about the people there. Xinjiang shows us what a surveillance state looks like under a government that brooks no dissent and seeks to preclude the ability to fight back. And it demonstrates the power of personal information as a tool of social control. Yet far from targeting bona fide criminals, Beijing’s actions in Xinjiang have been extraordinarily indiscriminate. But the use of mass detention is only part of Xinjiang’s story.

Has China’s one child policy increased crime? Crime rates in China have increased more than six-fold over the past three decades. 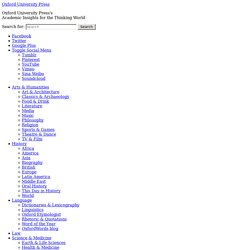 Likely causes include extraordinary economic growth and rising inequality, mass rural-urban migration, and the erosion of traditional values. “Living In China I See The Most Ridiculous Things, Like These People Who Have No Idea What They’re Wearing” (30 New Pics) Will China intervene in North Korea? North Korea is in the headlines - again. 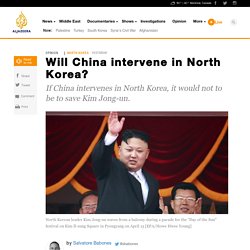 For a small, poor country of 25 million people, it sure does make a lot of news. This time it's the perennial issue of nuclear testing. North Korea has tested five nuclear devices since 2006. Donald Trump is in no mood to allow a sixth. Just days before his Florida summit with Chinese President Xi Jinping, Trump vowed that "if China is not going to solve North Korea, we will.

" Most people agree that North Korea is a problem. But why is North Korea China's problem in particular? The first Korean War China fought in the Korean War of 1950-53. China didn't participate in North Korea's initial invasion of the South. In 1592, Japan invaded Korea at Busan and rapidly drove up the peninsula to the Chinese border, prompting an intervention from China.

Japan went on to invade Korea again in 1597, but Korean forces repelled the attack with Chinese support. READ MORE: North Korea and mounting tensions - the view from Seoul Back to Pyongyang. Why Is China So … Uncool? There’s been much talk in recent weeks about China’s potential role as world leader, during a time when Trump’s America is erecting walls. 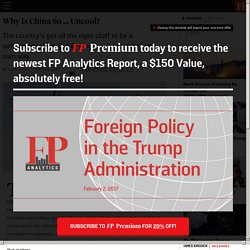 China has nearly all the characteristics to lead effectively, with its willingness to engage in global trade and its promises to fight climate change, all backed by its economic and military gravitas. Despite all this, China still isn’t beloved abroad, at least not to the extent that America is. Chinese New Year and psychology [infographic] With China’s continued emergence as an economic and political superpower, there is a growing need for those in the West to understand the distinct way in which the Chinese people view the mind and its study. 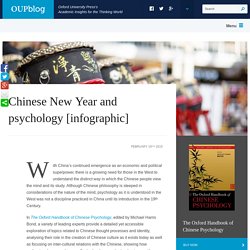 Although Chinese philosophy is steeped in considerations of the nature of the mind, psychology as it is understood in the West was not a discipline practiced in China until its introduction in the 19th Century. In The Oxford Handbook of Chinese Psychology, edited by Michael Harris Bond, a variety of leading experts provide a detailed yet accessible exploration of topics related to Chinese thought processes and identity, analysing their role in the creation of Chinese culture as it exists today as well as focusing on inter-cultural relations with the Chinese, showing how professionals can work more effectively when conducting business with Chinese people. Download the infographic in pdf or jpeg. Image Credit: “Edmonton Chinese New Year 2015.” Photo by IQRemix. Incredible Photos Of China's Eagle Hunters Keeping An Ancient Tradition Alive. In parts of China, Kazakhstan, Russia and Mongolia, men have been using birds to hunt for meat and fur for centuries. 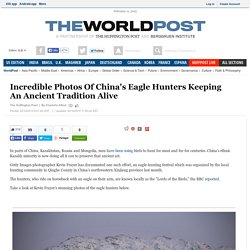 China's ethnic Kazakh minority is now doing all it can to preserve that ancient art. Getty Images photographer Kevin Frayer has documented one such effort, an eagle-hunting festival which was organized by the local hunting community in Qinghe County in China's northwestern Xinjiang province last month. Putting the Plan into Action: How China's Leaders Steer a Massive Nation. Western democracies consider themselves to be efficient, farsighted and just -- in other words, prime examples of "good governance. 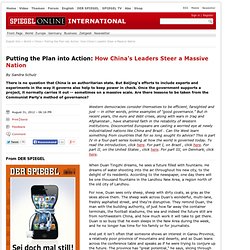 " But in recent years, the euro and debt crises, along with wars in Iraq and Afghanistan , have shattered faith in the reliability of Western institutions. Disconcerted Europeans are casting a worried eye at newly industrialized nations like China and Brazil . Can the West learn something from countries that for so long sought its advice? This is part IV in a four-part series looking at how the world is governed today. To read the introduction, click here. When Duan Tingzhi dreams, he sees a future filled with fountains. For now, Duan sees only sheep, sheep with dirty coats, as gray as the skies above them.

And yet it isn't often that someone shows an interest in Gansu Province, a relatively poor province of mountains and deserts, and so Duan leans across the conference table and speaks as if he were trying to conjure up the future. Duan's voice softens. China’s wealthy and influential sometimes hire body doubles to serve their prison sentences. Illustration by Robert Neubecker. 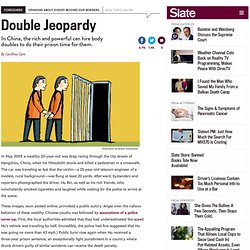 In May 2009, a wealthy 20-year-old was drag racing through the city streets of Hangzhou, China, when his Mitsubishi struck and killed a pedestrian in a crosswalk. The car was traveling so fast that the victim—a 25-year-old telecom engineer of a modest, rural background—was flung at least 20 yards. Afterward, bystanders and reporters photographed the driver, Hu Bin, as well as his rich friends, who nonchalantly smoked cigarettes and laughed while waiting for the police to arrive at the scene. These images, soon posted online, provoked a public outcry. Anger over the callous behavior of these wealthy Chinese youths was followed by accusations of a police cover-up.