Soil. Soil cross section. Lamella clay sandy soil. WSD3. Let's talk about soil. Global soils underpin life but future looks ‘bleak’, warns UN report. Global soils are the source of all life on land but their future looks “bleak” without action to halt degradation, according to the authors of a UN report. 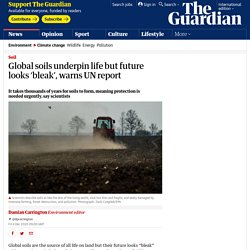 A quarter of all the animal species on Earth live beneath our feet and provide the nutrients for all food. Soils also store as much carbon as all plants above ground and are therefore critical in tackling the climate emergency. But there also are major gaps in knowledge, according to the UN Food and Agriculture Organization’s (FAO) report, which is the first on the global state of biodiversity in soils. The report was compiled by 300 scientists, who describe the worsening state of soils as at least as important as the climate crisis and destruction of the natural world above ground.

Crucially, it takes thousands of years for soils to form, meaning urgent protection and restoration of the soils that remain is needed. People should be worried, said Bardgett. “Certainly there’s hope that we can make soils healthy again,” said Eisenhauer. Rain Surface runoff. Ground Cover and Water Infiltration. Soil and change. Soil Degradation: The process of soil losing its fertility and nutrients and becoming biologically dead (reducing in quality and quantity). 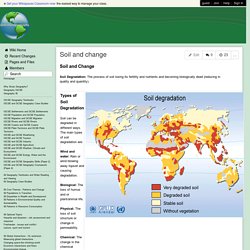 Problems Caused by Soil Degradation Desertification: The process of fertile land turning into desert. As the soil becomes more degraded and has less nutrients it can not support vegetation and effectively turns to desert.Dust Storms: As soil become less stable because of the lack of vegetation it become much more vulnerable to wind erosion which can create large scale dust storms. Northern China is suffering from an increased frequency of dust storms as desertification takes place south of the Gobi Desert.China sandstorm leaves Beijing shrouded in Orange Dust - BBC articleTopsoil Erosion: The top layer of the soil often referred to as the humus layers is very nutrient rich.

Soil & Change (4hrs) - Geography for 2015. Integrated soil fertility video. Soil presentation by Benedicta Philip. Soil Fertility. Soil Fertility This refers to the ability of the soil to supply essential plant nutrients and soil water in adequate amounts and proportions for plant growth and reproduction in the absence of toxic substances which may inhibit plant growth. 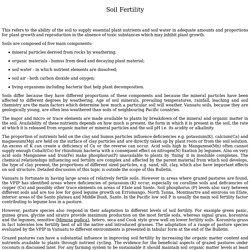 Soils are composed of five main components: We’re treating soil like dirt. It’s a fatal mistake, because all human life depends on it. Imagine a wonderful world, a planet on which there was no threat of climate breakdown, no loss of freshwater, no antibiotic resistance, no obesity crisis, no terrorism, no war. 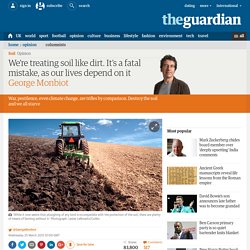 Surely, then, we would be out of major danger? Sorry. Even if everything else were miraculously fixed, we’re finished if we don’t address an issue considered so marginal and irrelevant that you can go for months without seeing it in a newspaper. Healthy Soil is the Best Crop. I’ll bet you don’t spend a lot of time thinking about dirt. 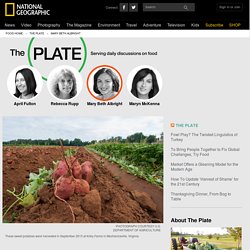 Even foodies who praise local produce and grassfed beef don’t regularly pepper culinary conversations with soil’s virtues. Compared with a plump, intoxicatingly fragrant, just-picked strawberry, dirt is not the most sensually compelling call-to-arms for agricultural sustainability. The fight for healthier soil is often swept away in our global debate over how to responsibly feed 9 billion people by 2050. Do We Treat Our Soil Like Dirt? That question headlining a 1984 National Geographic article on soils remains as relevant today as it was more than 30 years ago. 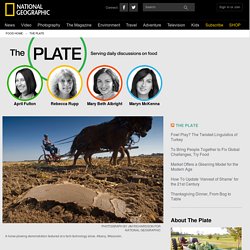 We lavish attention on our food, we want to know where it came from, who grew it, and whether it is “conventional” or “organic.” But we give hardly a passing thought to the ground our food grew in. Soil could use some more attention and respect. After all, soil is the thin skin of our earth where we plant and grow the vital grain crops like wheat, rice, and corn that feed more than seven billion of us. And while the future rests on the soil beneath our feet, as National Geographic also put it in a 2008 article on soils, history is littered with the remains of civilizations that ignored, exploited, and degraded the soil beneath their feet. One third of the world’s soil already has been damaged by water and wind erosion, deforestation, compaction, nutrient depletion, and pollution.

In the late 1930s, soil scientist W.C. It’s about time. When land is degraded, its people and their prospects are degraded too. With so many of the world's 48 least developed countries (LDCs) at the centre of global security concerns – from Afghanistan to Central African Republic to Mali, Nigeria and Somalia – wealthier states would be wise to support the actions LDC politicians agreed to (pdf) at a meeting they held in Benin last week. 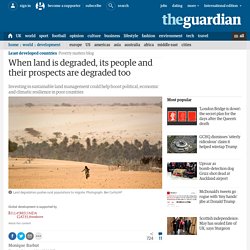 LDCs identified areas that can boost their economies if they take action: reorienting policies for agriculture, rural and infrastructure development, and for private investment; building small and medium-sized enterprises; diversifying commodities; investing in women and youth, and physical infrastructure; and mobilising their diaspora communities. Support from external sources will be crucial. Global resources are finite, but that is not a justification for inaction. Rather, eradicating poverty and bolstering economic security in LDCs (pdf) calls for accurate, targeted action. So where should the international community aim its efforts? Land is a vital natural resource. OrganicFarming (@OrganicFarmingB)