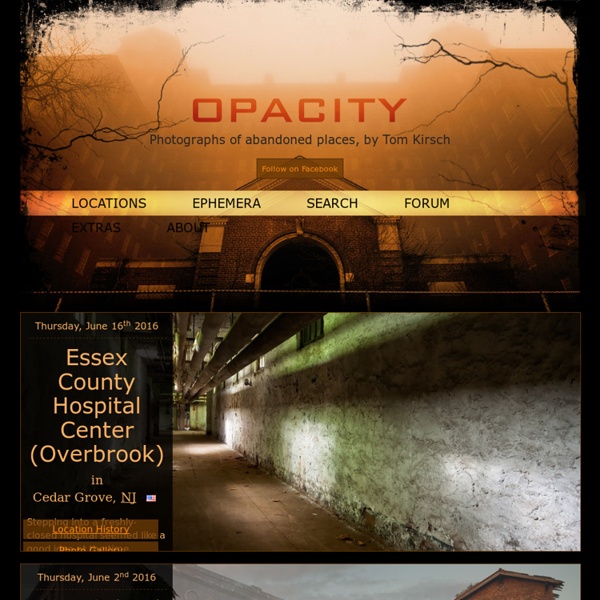 Amazing Photos Of Abandoned Soviet Infrastructure Will Show You the Meaning of Desolate From 2013 to 2015, Russian photographer Danila Tkachenko traveled thousands of miles to some of the most remote regions of the country to photograph once-proud structures of the Soviet Union that have fallen into ruin. The collection, titled Restricted Areas, focuses on society's desire to create utopia through advances in science and technology. The photos serve as a reminder of what can happen when a nation reaches too far. As Tkachenko writes on his own website: "I travel in search of places which used to have great importance for the technical progress—and which are now deserted.

2015 Dodecahedron Cartographic Review - ZERObarrier The 2015 Dodecahedron Cartographic Review is an 88-page curated collection of most of the maps and descriptions thereof that appeared on Dyson's Dodecahedron throughout 2015. Designed to be a letter-sized spiral bound book, this digital edition also includes a second version of the book where many of the maps have been resized (larger) to better fit the page once all the text has been removed. Unlike the maps of Dyson's Delves I and Dyson's Delves II, the maps I drew for the Dodecahedron in 2015 were predominantly drawn on letter-sized paper, so a different format of map book was needed for this review of the year's cartography. The PDF edition of these maps is provided as a convenience for readers of the blog and fans of RPG cartography and contains no exclusive content - everything in this PDF can be hunted down on the Dyson's Dodecahedron blog and downloaded at high resolution.

Hitler's Olympic Village – Berlin, Germany Little known to most tourists and even Germans, on the edge of Berlin lie the chilling abandoned remains of “Hitler’s Olympic village,” built for the so-called Nazi Games of 1936. Germany won the bid to host the 1936 Summer Olympics two years before the Nazi Party came to power, and Reich Chancellor Adolf Hitler saw this as an opportunity to spread Nazi propaganda and build up Germany’s military machine. Hitler oversaw the construction of the Olympic village in Wustermark, on the outskirts of Berlin. In its heyday the now decaying complex included state-of-the-art dormitories, dining areas, training facilities, a swimming pool and hosted some 4,000 athletes in luxury accommodations the likes of which had rarely be seen. Ironically, it was designed to portray an idyllic, picturesque image of a peaceful Germany to the world (the 1936 Games were the first to be televised) and the Führer even named the complex the “village of peace.”

What's Hiding Beneath New York City Is Amazingly Creepy Posted in New York February 04, 2016 by Lea Monroe Full of historical secrets and wonder, the ground you’re walking on in New York may hold more mystery to it than you would ever imagine! Hiding over ten stories beneath the streets of the city and the world-renowned Waldorf Astoria luxury hotel, lies a secret subway platform that will have everyone wishing these walls could talk. Like something out of your favorite book, at the turn of a brass knob behind a secret door on 49th Street, awaits Track 61. When the Waldorf Astoria first opened its doors, it had publicly announced the high-end private railway would be available for use to its guests, but would never be intended for public passenger use. Due to the overall secrecy surrounding Track 61, it's often hard to distinguish between rumor and truth when it comes to stories of those who have supposedly used the railway. So, how did President Roosevelt benefit from this hidden track and how exactly did this all work?

theconversation Without farming, Britain’s countryside would be drastically different. Imagine walking through landscapes un-tilled, un-sown, un-fertilised and un-treated, nor grazed by cattle or sheep. Following the Brexit vote, the government has to decide what to do about the Common Agricultural Policy (CAP), the EU’s subsidy scheme for owners of farmed land. Some of these subsidies support food production while others support environmental protection on land suitable to be farmed. In 2015, British farmers received roughly £3.2 billion from the EU. Agricultural land covers 70% of the UK. This may be unlikely (and it’s certainly not what I’d recommend) but it’s still worth exploring an even more dramatic scenario: what would happen if Britain’s farmers sold all their livestock and equipment and abandoned their land? There would be cultural, social and economic shock for sure. Scenario one: land abandonment In time, shrubs and trees will venture into abandoned fields from woodland and hedgerows.

Maps | Dyson's Dodecahedron Updated July 18th 2018 – 625 Maps Good lord I love maps. When I started this blog I hadn’t even considered using it to fulfill my map fetish in some twisted way. But now it is best known for my maps. So here I’m collecting all my maps so you don’t have to dig through the whole archive of blog posts to find them. I’ve also included a legend of the majority of the mapping symbols used throughout these maps (well, mostly the overhead maps – the side-views are pretty much the same and/or self-evident I hope). Overhead Map Key There are several groups of maps I’m not linking to here, for those you’ll have to go to their appropriate pages: Ruins at the Three Pillars of Ssa-Tun Delren Street Sewers DiTullio Islands The Dragons Nest Proving Grounds of the Mad Ogre Lord Wharton Mine Crypt of the Queen of Bones Temple of the Jade Gorgon The Savage Caves Guimond’s Tower and Lair of the Druid Lich Lair of the Golden Wolf Vault of the CaveMorphs! Baraloba: Forest Paths Baraloba – The Eagle Hills Mines Quebec Region

Abandoned Orient Express Photos The Orient Express is one of the few true relics we have of Old World splendor. Though it was created in 1883, it's best remembered as the luxury travel line that carried wealthy aristocrats from Paris to Constantinople in the Roaring Twenties. Stéphane Peres/Flickr Creative Commons Advertisement - Continue Reading Below Made infamous by Agatha Christie's 1934 novel Murder On The Orient Express, the name itself still evokes imagines of wispy woman draped in fur, smoking long cigarettes while lounging in the luminescent glow of the dining car. While The Orient Express does still run today, its truncated route and exorbitant pricing has turned it into more of a tourist attraction for people willing to pay a high price to relive a bygone era. Getty Images But Dutch photographer Brian Romeijn managed to come across–and take stunning photos of–an actual Orient Express train from the 1930s that was abandoned in the woods. Brian Romeijn/PreciousDecay.com From: The Newsroom

Dyson's Dodecahedron | Award Winning Dungeon Design Deserted Industry: 7 (More) Abandoned Wonders of America [Image used with Permission of Photographer Ben Willmore] Much of America’s little-remembered history can be found in largely unknown structures scattered across the United States, some of which are silently falling apart. Many of these have amazing claims to fame and set records in their time – the world’s first auto assembly line or the largest brewery in the US – while others represent outdated building types that recall decades past or even generations before our time. Also be sure to check out parts one and two of this series, and see more under 100+ Abandoned Buildings, Places and Property. Abandoned Beer Brewery Complex Milwaukee, Wisconsin: Once the largest brewer in America, the Pabst Brewery was opened in the mid-1800s and closed its doors over a century and a half later in the mid-1990s. Abandoned Mental Institution for Children Abandoned Factory Town Housing Residences First Automobile Mass-Production Facility Abandoned Military Academy Complex Abandoned Drive-In Movie Theater

The Dyson MegaDelve | Dyson's Dodecahedron 3 Votes The Dyson MegaDelve is a dungeon map that I started in late 2014 and finished in early 2015. It started as a “small” megadungeon and gradually evolved into a 30-map monstrosity. Node Map (click to enlarge) That’s the full list of the maps involved and how they connect. Here’s the maps in question: They come together into something like this: The Whole Mega Delve (click for huge graphic) Share this: Like this: Like Loading... Follow Get every new post delivered to your Inbox. Join 728 other followers Build a website with WordPress.com %d bloggers like this: 18 Haunting Photos Of An Abandoned Nazi Hospital - Beelitz-Heilstätten Hospital While most abandoned buildings looks like they're haunted, they're really just the derelict remains of mansion that a family struggled to sell or the shell of an old warehouse. But the history behind Beelitz-Heilstätten Hospital is actually as creepy as it looks. Built as a tuberculosis sanatorium, this enormous hospital complex stands 30 miles southwest of Berlin. It was used to treat Nazis during World War II and the Soviet Army up until the 1990s. This is also where a young Adolf Hitler recovered after being wounded in World War I. Hitler was treated at Beelitz-Heilstätten Hospital in 1916. Getty Advertisement - Continue Reading Below The Berlin Workers' Health Insurance Corporation designed this 60-building hospital complex. During World War I it served as a military field hospital of the Imperial German Army. In 1945, Red Army forces occupied Beelitz-Heilstätten, and the complex remained a Soviet military hospital until 1994, several years after the fall of the Berlin Wall.

Grid Paper PDFs Free Online Graph Paper / Grid Paper PDFs Downloadable and very printable, I find these PDFs extremely useful. Tip number one! Though I do return the correct header for a PDF, sometimes Explorer gets confused when downloading... Tip number two! Some people may need to turn off the option in Adobe's Acrobat reader "shrink to fit" which may resize the grid slightly to fit your printer's printable area. Tip number three! If you want the hexes aligned with the other edge of the paper, just make your paper size "11 x 8.5" and print the result in landscape mode! Translations Belorussian (provided by Ucallweconn weblog) Other