On Land by Auto

WRC 73 Rally Poland 2016 - 30 min Service of Stephane Lefebvre damaged Citroen WRC. The 2022 Kia Stinger Could Be An Instant Classic. The Kia Stinger, you probably have heard by now, is the real deal, an honest challenger to a car like the BMW M340i. 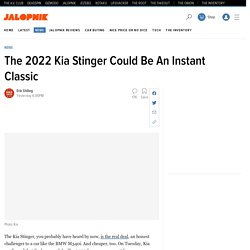 And cheaper, too. On Tuesday, Kia confirmed that the base model will get 300 horsepower, or 45 horsepower more than the outgoing, as we first heard in August. The Kia Stinger is edging toward the ideal. Not that 255 horsepower out of the four-cylinder is anything to sniff at in the 2021 base model, and you could always step up to the twin-turbo V6 and get 365 horsepower. But, and perhaps this is merely an aesthetic thing, 255 horsepower always felt agonizingly close to the correct amount of horsepower, but just short and thus inadequate. Jeep Wrangler Engine Explodes After 50,000 RPM Rev. Truck YeahThe trucks are good! 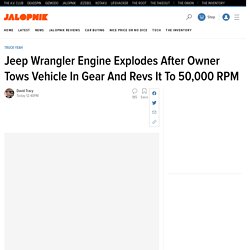 A 2021 Jeep Wrangler’s 3.6-liter V6 engine apparently tried revving to eight times its redline after the owner left the vehicle’s transfer case in low-range while flat-towing, The Drive reports. The resulting stresses tore the engine apart, yielding a scene that looks as if it might have been caused by a grenade. The car website spoke with the foreman of a north Florida shop to learn more about the ruined white 2021 Jeep Wrangler Unlimited Rubicon that had been flat-towed behind an RV. From The Drive: This Pole In A Walmart Parking Lot Causes So Many Car Accidents, There's A Whole Facebook Page Dedicated To It (14 Pics) Crashing your car is a horrible experience that can put you off from driving for a long, long time. 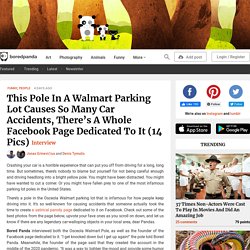 But sometimes, there’s nobody to blame but yourself for not being careful enough and driving headlong into a bright yellow pole. You might have been distracted. You might have wanted to cut a corner. Or you might have fallen prey to one of the most infamous parking lot poles in the United States. I Want An Audi RS6 Avant But I Have A $30,000 Budget. What Car Should I Buy? Gus, like many of us, is thrilled that the Audi RS6 superwagon is now being sold in America. 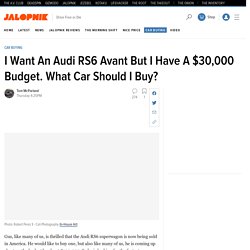 He would like to buy one, but also like many of us, he is coming up short on the budget by about $100,000. So he is looking for the fastest wagon available for “reasonable” money. What car should he buy? (Welcome back to What Car Should You Buy? Where we give real people real advice about buying cars.) This 1970 Plymouth Barracuda Brochure Makes One Of The Weirdest Claims I've Seen. I always like it when old car ads or brochures go out of their way to tout features and details that are, to modern eyes, absolutely baffling. 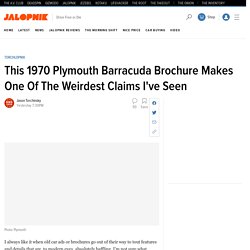 I’m not sure what exactly causes the car-buying public to decide what they find important or interesting, but I’m pretty sure one thing that gets special mention in this 1970 Plymouth Barracuda brochure is something that—and I’m going to go out on a limb here—exactly zero potential Barracuda buyers gave a brace of BMs about. Here’s the spread in question: Specifically, here’s the part that caught my attention: See that? YouTuber Quickly Trashes His New 702-HP Ram 1500 TRX Pickup With Massive Jump. Deliveries of the 702-horsepower Ram TRX pickup only just kicked off in the past month or so, and folks aren't wasting time when it comes to testing their off-road chops. 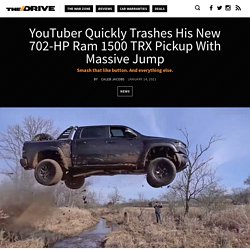 For some, that means wheeling on designated trails and dunes—y'know, the stuff this Hellcat truck was built for. Others, though, are sending them off big dirt ramps, getting huge air and almost demolishing their $90,000+ rigs in a single pass. Actually, it looks like just one guy is doing that. The Search for the Greatest Sports Car of All Time. Curse our names at the fortune of it. 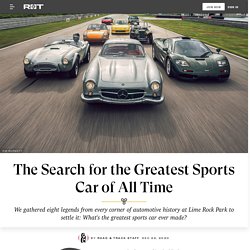 The blind absurdity of these cars gathered together for two days of driving, 48 blissful hours on the edge of autumn at Lime Rock Park. Our own personal legends at our disposal, keys in hand. The Ginetta G55 GTA Makes Modifying A Street Car Seem Silly. Jalopnik ReviewsAll of our test drives in one convenient place. 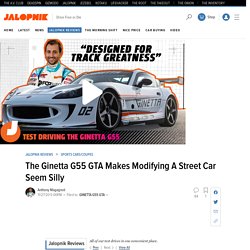 Any car designed to operate on the road requires a lot of engineering effort to make it street legal and comfortable enough to drive without a helmet. You may not understand how much those efforts inherently compromise a car for the track until you’ve driven a machine designed for track greatness from the very beginning. Watch A Ford MkII Escort Take On A 2011 Ford Fiesta Rally Car. Ever wondered how a 1980 Ford Mk11 Escort would fare in a rally battle against technology nearly 30 years more advanced? 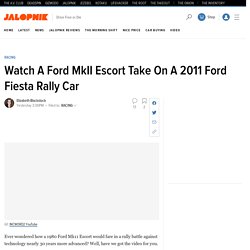 Well, have we got the video for you. Elfyn Evans, the young driver behind the wheel, finished second in the World Rally Championship standings this year. He led the Championship for the first time in his career, but an off-track excursion saw him forced to settle for second overall. Learn The Art Of The Limo Stop With A Certified Rally Instructor. Today is Sunday, and Sundays are for learning new driving skills. 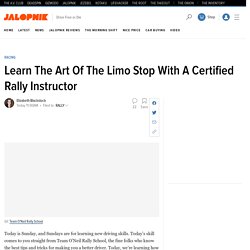 Today’s skill comes to you straight from Team O’Neil Rally School, the fine folks who know the best tips and tricks for making you a better driver. Today, we’re learning how to perform the limo stop. What is the limo stop, you ask? I’ll tell you. The 50 Most Underappreciated Cars of All Time. Generational shifts almost always wreak havoc on accepted pop-culture wisdom. As one cohort ages out of a particular scene — be it music, movies, fashion or design — a new group rushes into to fill the gap, bringing with them their own ideas about what’s cool, what’s not and most importantly, where you should turn your attention next. The automotive world has always lagged behind when it comes to recognizing which of its past efforts are worthy of praise. Seen clinically, old cars are just that: consumer products that are past due, vehicles that have fulfilled their original purpose and now serve primarily as money pits or recycling fodder so that the next set of shiny paint jobs can move on down the assembly line and keep feeding the retail flames.

From a cultural perspective, however, vehicles are often indelibly associated with emotions, experiences and eras in our lives. What qualifies a classic car as “underappreciated?” Driver in Supercharged Ford Mustang Hits 178 MPH Fleeing From Police on Arkansas Interstate. The precise Mustang in question appears to be a 2017 GT with some manner of Roush performance upgrades, likely a Stage 3 kit. This means its 5.0-liter V8 gets fitted with a 2.3-liter supercharger, boosting output to around 675 horsepower. As well as getting the supercharger, the car also has an upgraded exhaust system and some other aesthetic modifications visible in the video. As far as the police chase goes, however, 675 horsepower is not enough to stage a getaway.

The machine befell turbo problems that saw repairs that lasted just under an hour. The Aston Martin Victor Is A V12 Manual-Shift Wood-Trimmed Supercar You Won't See Again. The Aston Martin Victor, a privately commissioned one-off car I only just found out about from British friends on social media, might be the coolest vehicle to come out in 2020.

I mean, come on: Weird multi-era styling, cashmere headliner, V12... manual transmission?! The more I look at the more jarring it is. I love it. Cyan Racing Resurrects The Volvo P1800 As A Badass Little Racecar. I used to own a Volvo P1800, and I’ve always loved the look of the car because I am a human with a pair of functioning eyeballs. The proportions are just right, the amount of detailing and brightwork is restrained but has enough jewelry to keep you interested, and there’s plenty of nice details without cluttering the look. At $5,000, Would You Take A Victory Lap Of Luxury In This 1994 Jaguar XJ12? Nice Price Or Crack PipeIs this used car a good deal? YouTuber Destroys 2021 Mini John Cooper Works GP In His Backyard On The Same Day It Was Delivered.

Staggeringly Rare Old Skyline Shows Up In An Idaho Junkyard. Among all the Cavaliers and Barettas and Escorts and Cutlass Supremes that populate so much of the junkyards of America’s vast midwest, you occasionally find some fascinating weirdos, too. The 2020 Lotus Evora GT Is Exactly What A Sports Car Should Be. Jalopnik ReviewsAll of our test drives in one convenient place. A Brief History of the Volkswagen Bus. When Jerry Garcia passed away in 1995, Volkswagen remembered the Grateful Dead frontman by running an ad featuring a VW Microbus with a tear streaming from one headlight.

It was an epochal moment when two counterculture symbols came together in tender recognition of their influence on mainstream society. Watching This Isuzu Tread Water Up to Its Windshield Will Stress You Out. Mathematicians outline how cities can avoid traffic jams. The Best Photos of the Spectacular One-Off 1965 Dodge Deora Pickup Truck. YouTuber Illustrates What Happens When You Hit A Speed Bump At Full Speed. Go Karting on a Frozen River Looks Hella Fun. Why Men Who Drive Convertibles Will Never Be Taken Seriously. Parallel Parking Videos.

The Tin Can School 'Buses' of India. Guy Tries To Show Off The Acceleration Of His Vintage Chevy Chevelle, Instantly Regrets It. Ford roars into Goodwood with a 700-hp GT for the track. We Drove the 2020 Ford Interceptor... and Criminals Better Watch Out. The new Ultima RS hypercar: 1200 horsepower and 250 mph for drivers on a budget. Michelin and GM unveil airless tires for a puncture-free ride. Watch a Ford GT Hit 300.4 MPH in One Mile. This Modernized Classic Mini Is the Perfect City Car. The Complete Audi Buying Guide: Every Model, Explained. We’re huge fans of Audi’s current and past products – the company blends high technology with solid performance and styling that is handsome if a bit reserved. Man Puts Giant 37-inch Off-Road Tires On a Honda Accord and Goes Mall Crawling. Essential Driving Skills to Become a Better Driver in 2019. Man Launches His BMW Into the Air Ahead of a Slovakian Tunnel Like This is Grand Theft Auto.

Amati: Japan's Greatest Mystery Car. It Looks Like Volkswagen Is Definitely Bringing Back the Beach Buggy. What It's Like to Drive a Formula Race Car. Stärke Speedster Transforms Modern Boxster into Classically-styled Porsche. Jalopnik. Unicat's latest 4x4 expedition truck escapes civilization without losing the comforts of home. How to Heel-And-Toe Shift. Jalopnik. Jalopnik. I Can't Stop Watching These Video Game Cars Crashing Into a Chain Wall. Watching These Cars Fly Off a Cliff Is Wildly Entertaining. When a Car Drives Over 100 Straight Speed Bumps Until It Flies Apart. Modular camper kit turns the Sprinter into a DIY adventure van for nomadic thrill-seekers.

Kia Quoris: Loaded with luxury and ready for export. Kit To Turn Gas Engine Into Hybrid To Be Released This Year. Driving Safety, in Fits and Starts - Graphic. Ebuggy concept promises "unlimited range" for EVs. Ariel updates its Atom racer. Nitrogen cycle: Difference Engine: End of the electric car? Hyundai reveals new production Veloster RE:MIX for under US$20k. Caterham and Renault teaming up to bring back the Alpine. "Smart Highways" will glow in the dark, plus a lot more. 10 Unbelievable Scenes of Cars Hit From Above - Oddee.com (car accident, crash...) LA Design Challenge 2012 puts out APB for patrol vehicles of 2025. Original Batmobile to go under the hammer.