Rose of No Mans Land Perry 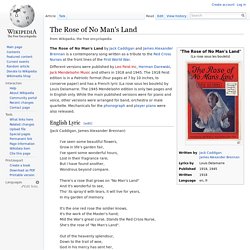 Different versions were published by Leo Feist Inc, Herman Darewski, Jack Mendelsohn Music and others in 1918 and 1945. The 1918 Feist edition is in a Patriotic format (four pages at 7 by 10 inches, to conserve paper) and has a French lyric (La rose sous les boulets) by Louis Delamarre. The 1945 Mendelsohn edition is only two pages and in English only. While the main published versions were for piano and voice, other versions were arranged for band, orchestra or male quartette. Mechanicals for the phonograph and player piano were also released. English Lyric[edit] (Jack Caddigan, James Alexander Brennan) French Lyric[edit] (Louis Delamarre) J'ai vu bien des fleurs s'empourprer, Au jardin de la vie. 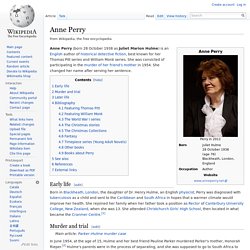 She was convicted of participating in the murder of her friend's mother in 1954. She changed her name after serving her sentence. Early life[edit] Murder and trial[edit] On 22 June 1954, the girls and Honora Rieper went for a walk in Victoria Park in their hometown of Christchurch. Parker and Hulme stood trial in Christchurch in 1954 and were found guilty on August 29 of that year.

Parker and Hulme are not believed to have had any contact since their trial.[4] These events formed the basis for the 1994 film Heavenly Creatures, in which Melanie Lynskey portrayed a teenage Pauline Parker and Kate Winslet portrayed teenaged Juliet Hulme. Although many presumed Hulme's and Parker's relationship to be sexual, Perry stated in 2006 that, although the relationship was obsessive, the two "were never lesbians".[4] 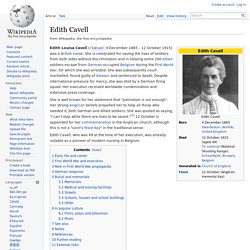 She is celebrated for saving the lives of soldiers from both sides without discrimination and in helping some 200 Allied soldiers escape from German-occupied Belgium during the First World War, for which she was arrested. She was subsequently court-martialled, found guilty of treason and sentenced to death. Despite international pressure for mercy, she was shot by a German firing squad. Her execution received worldwide condemnation and extensive press coverage. Edith Cavell, who was 49 at the time of her execution, was already notable as a pioneer of modern nursing in Belgium. Early life and career[edit] Cavell in a garden in Brussels with her two dogs before the outbreak of war Cavell (seated centre) with a group of multinational student nurses whom she trained in Brussels Edith Cavell was born on 4 December 1865 in Swardeston, a village near Norwich, where her father was vicar for 45 years. Rose of No Man's Land by Anne Perry.

1918: Australians in France - Nurses - "The roses of No Man's Land" Nurses were the most significant section of the group of Australian women that participated in the war effort away from the home front. 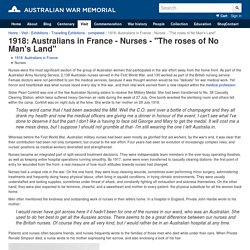 As part of the Australian Army Nursing Service, 2,139 Australian nurses served in the First World War, and 130 worked as part of the British nursing service. Female doctors were not permitted to join the medical services, because it was thought women would be too "delicate" for war medical work. Yet horror and heartbreak was what nurses faced every day in this war, and their vital work earned them a new respect within the medical profession. Sister Pearl Corkhill was one of the few Australian Nursing sisters to receive the Military Medal. She had been transferred to No. 38 Casualty Clearing Station, which twice suffered heavy German air raids during the week of 27 July.

Today word came that I had been awarded the MM. Nurses became an integrated part of split-second treatment decisions. Nurses had a unique role in the war. Rose of No Man's Land.