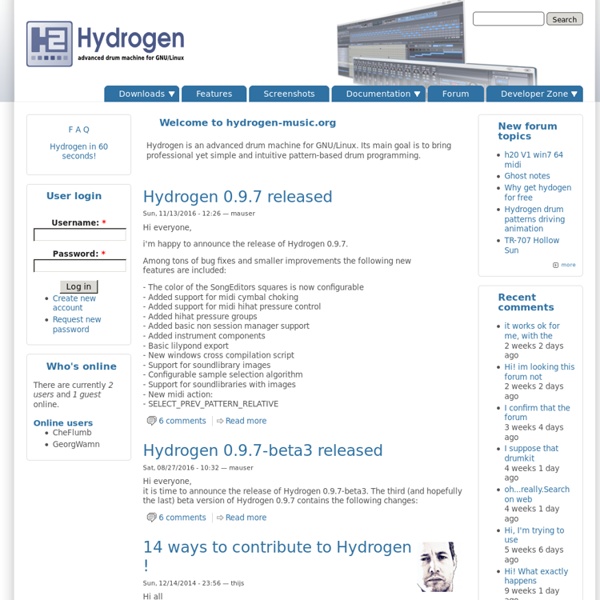 Today is feature freeze for the upcoming 0.9.6 ! This means that now new functionality will be added for this release. The most important new features for the 0.9.6 are: - Jack session support - Jack midi out - Undo history

Secrets of the Hits In the Style Of Paramore - Udemy We started Multi-Platinum to connect you to top producers and great teaching. Our goal is to help you produce continually better music, by getting you working alongside the best performers and producers in the world. I’m Nathan “Adan” Adam, a founder of Multi-Platinum, active audio and television post producer, studio owner and professor of audio engineering at Belmont University. As an audio & video producer, I've edited, recorded or mixed projects for artists including the orchestral score for “Peter Pan with Cathy Rigby”, multi-platinum country star Collin Raye, the Grascals, Debbie Boon, the Grascals, Jim Stafford, Larry Gatlin, Carrie Tillis, Les Brown Jr, and many others. Over the last 13 years I’ve worked with literally thousands of musicians just like you to help them launch their careers as producers and engineers.

Don Quixote Published in two volumes, in 1605 and 1615, Don Quixote is considered the most influential work of literature from the Spanish Golden Age and the entire Spanish literary canon. As a founding work of modern Western literature,[citation needed] and one of the earliest canonical novels, it regularly appears high on lists of the greatest works of fiction ever published, such as the Bokklubben World Library collection which cites Don Quixote as authors' choice for the "best literary work ever written",[1] and has been translated into more languages than any book other than the Bible.[citation needed] It has had major influence on the literary community, as evidenced by direct references in Alexandre Dumas' The Three Musketeers (1844) and Mark Twain's Adventures of Huckleberry Finn (1884).

Edward Docx's top 10 deranged characters Edward Docx's first novel, The Calligrapher, was published to widespread acclaim in 2003 and has now been translated into eight languages. His second novel, Self Help, published in 2007, was longlisted for the Man Booker prize and went on to win The Geoffrey Faber prize. In 2003 and then again in 2007, Docx travelled in South America as part of the research for his third novel, The Devil's Garden, which is published this week. "I have always preferred reading in the insightful company of lunatics. Sometimes, it's a gradual Nabokovian thing – the unassuming reader and the engaging protagonist set off together and only gradually does the former begin to realise that the latter is a madman. And sometimes, as with Burgess, it's all abundantly clear from the off.

LMMS: free, open source music sequencer & multitracker LMMS is a free, open source music production software inspired by commercial apps such as FL Studio (FruityLoops) . It enables you to create melodies and beats and to create, mix, and arrange sounds and samples, and will even import Fruityloops project files. It allows access to LADSPA effects and is compatible with many standards such as SoundFont2, VST(i), and GUS Patches, and offers full MIDI/MIDI project files support. LMMS is multiplatform (Windows, Linux). If you’re a musician or just curious about creating music, and if you’ve been looking for a viable freeware/open source alternative to paid music creation software then take a look at this one.

MS Paint Adventures So what do we call this pause? I've been batting ideas around all day. We could go with the obvious choice, the MINIGIGAPAUSE. Or maybe, MEGAPAUSE 2: BACK IN THE MEGASADDLE. Or if that makes too much sense, we could always settle on the MICROTERAPAUSE.

100 of the Best (Useful) OpenSource Applications The following is a list of about 100 of the best OpenSource Applications, that actually help make Linux more usable for people. It is my hope that this list shows potential Linux users that there really is a large, effective, productive and usable range of free, OpenSource applications. For existing Linux users (like myself), I think this will provide a great resource in finding applications that may better suit your needs, or just for fun! Needless to say, this is just some of the thousands of applications available!

4th Job Discussion Thread - FlyForHero Forums - A Flyff Private Server Since the new Dev, Fixer, made the possibility of implementing a 4th job public I thought it would be interesting what they would be called. I doubt staff decided what to name them yet so why not toss out our ideas here ;D Slayer--->Gladiator/Liberator/Sword Dancer Templar--->Juggernaut/Destroyer/Titan Ingen Ingen (formerly Om) is a modular audio processing system for GNU/Linux audio systems using the Jack audio server and LV2 or LADSPA plugins. Ingen is built around LV2 technology and a strict separation of engine from user interface. The engine is controlled exclusively through a protocol, and can execute as a headless process, with an in-process GUI, or as an LV2 plugin. The GUI can run as a program which communicates over a TCP/IP socket, or as an embeddable LV2 GUI which communicates via LV2 ports.