Master of the Basics Chapter 11, a naruto fanfic. Haha I am so glad that everyone is enjoying Lee's misery. 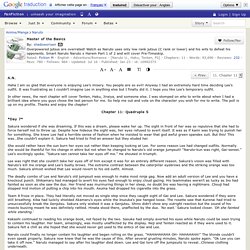 You people are so evil! Anyway I had an extremely hard time deciding Lee's outfit. It was frustrating as I couldn't imagine Lee in anything else but I finally did it. I hope you like Lee's temporary outfit. In other news, the next chapter will cover Tenten, Haku, Jiraiya, and someone else. Chapter 11: Quadruple S *Day 7* Sakura wondered if she was dreaming. She would rather have the sun burn her eyes out rather than keeping looking at Lee. Lee was right that she couldn't take her eyes off of him except it was for an entirely different reason. The deadly combo of Lee and Naruto's old jumpsuit was enough to make most ninja gag. Team 8 froze in place. Kakashi continued to reading his orange book, not fazed by the two. Naruto could finally no longer contain his laughter and began rolling on the grass.

A Family of Foxes & Snakes: Rewind! Chapter 35, a naruto fanfic. Chapter 35 Naruto was much different from others. 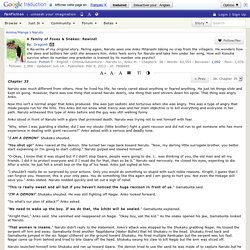 How he lived his life, he rarely cared about anything or feared anything. He just let things slide and kept on going. Herald of the End Chapter 22: Stop My Heart, a naruto fanfic. You guys are completely awesome! 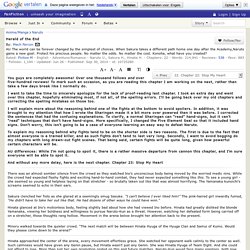 Over one thousand follows and over five-hundred reviews! To mark such an occasion, as you are reading this chapter I am working on the next, rather than take a few days break like I normally do. I want to take the time to sincerely apologize for the lack of proof-reading last chapter. I took an extra day and went over this chapter, hopefully eliminating most, if not all, of the spelling errors. I'll be going back over my old chapters and correcting the spelling mistakes on those too. I will explain more about the reasoning behind one of the fights at the bottom to avoid spoilers. To explain my reasoning behind why fights tend to be on the shorter side is two reasons. Son of the Green Beast Chapter 22, a naruto fanfic. Disclaimer: Naruto is pretty much over, save for the movie and whatever Kishimoto does this year. 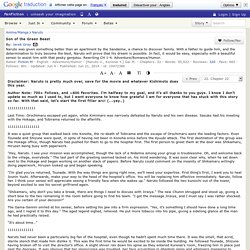 Author Note: 700+ Follows, and ~600 Favorites. I'm halfway to my goal, and it's all thanks to you guys. I know I don't update as much as I used to, but I want everyone to know how grateful I am for everyone that has stuck with this story so far. With that said, let's start the first filler arc! (...yay…) Last Time: Orochimaru escaped yet again, while Kimimaro was narrowly defeated by Naruto and his own disease. It was a quiet group that walked back into Konoha, the re-death of Tobirama and the escape of Orochimaru were the leading factors. Team 8 Chapter 21: A Pyrrhic Victory, a naruto fanfic.

Chapter 21 Hinata's fingers ached and it took her a moment to realize that her hands were tightly clenched as she stared down at her teammate's face. 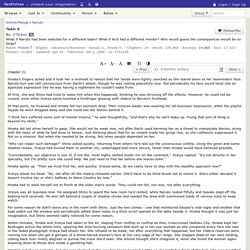 Naruto-kun was still unconscious from Itachi's attack, though he was resting peacefully now. But periodically his face would twist into an agonized expression like he was having a nightmare he couldn't wake from. At first, she and Shino had tried to wake him when this happened, thinking he was throwing off the effects. It's all in the Cards Chapter 4 - Contact, a naruto fanfic. Chapter 4- Infiltration Naruto twisted, letting Sasuke's fist hit the air above him. 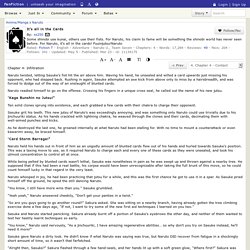 Waving his hand, he unsealed and willed a card upwards just missing his opponent, who had stepped back. Rushing in again, Sasuke attempted an axe kick from above only to miss by a hairsbreadth, and was forced to dodge out of the way of an onslaught of blunted cards. Naruto readied himself to go on the offense. Crossing his fingers in a unique cross seal, he called out the name of his new jutsu. "Kage Bunshin no Jutsu! " Ten solid clones sprung into existence, and each grabbed a few cards with their chakra to charge their opponent.

The Burning Bone Chapter 12: So I prayed I could breakaway, a naruto fanfic. It was safe to say that after the previous day, Naruto Uzumaki didn't get much sleep at all. 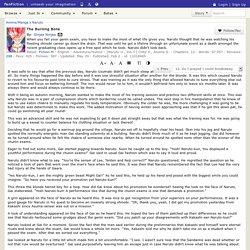 So many things happened the day before and it was one stressful situation after another for the blonde. It was this which caused Naruto to revert to his favourite past time to cure stress. That was training as it was the only thing that allowed Naruto to tune everything else out around him and focus on bettering himself. The iron would never lie to him, it wouldn't befriend him only to leave six months later. It was always there and would always continue to be there. With it being an autumn morning, Naruto wanted to make the most of his training session and practice two different skills at once.

The Howling Wind Chapter 32, a naruto fanfic. "Lookin' for my boy, in the box, paranoid. 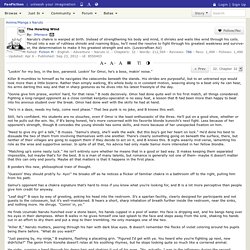 Lookin' for Omoi, he's a boss, makin' noise. " Killer B mumbles to himself as he navigates the catacombs beneath the stands. His strides are purposeful, but to an untrained eye would look more than a little bizarre. Rather than simply walking, B's whole body is in constant motion, weaving along to a beat only he can hear, his arms darting this way and that in sharp gestures as he dives into his latest freestyle of the day. The Mouse of Konoha Chapter 22 Mouse Making Mistakes, a naruto fanfic. Chapter 22 – Mouse Making Mistakes. 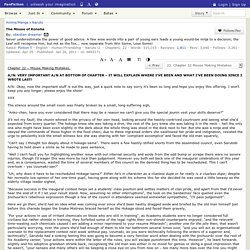 A/N: Okay, now the important stuff is out the way, just a quick note to say sorry it's been so long and hope you enjoy this offering. I won't keep you any longer; please enjoy the show! The silence around the small room was finally broken by a small, long-suffering sigh, Naruto: ChakraTek Chapter 7, a naruto fanfic. Before I start this story, I'd like to give a shout-out to Keyser.S. 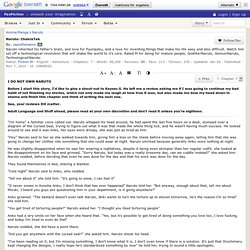 He left me a review asking me if I was going to continue my bad habit of not finishing my stories, which not only made me laugh at how true it was, but also made me bow my head down in shame and finish this chapter and think of writing the next one. See, your reviews DO matter. Adult Language and Stuff ahead, please read at your own discretion and don't read it unless you're eighteen.

Complete. How Destiny Turns Chapter 29: The Land of the Waves III, a naruto fanfic. DC: I don't own Naruto. Chapter 29 Naruto slept in the morning of the final attack. The day before after his 'special' training, Naruto had fervently set upon his fuinjutsu work, and he remained working into the dead of night. Guy hadn't stopped him, guessing the blonde was creating something usable against Hiru. He was right. Sensei, could you not wake me up? I made something that could help us win against Hiru. On the back of this note. She'll know what to do. Naruto: The Storm Sage Chapter 23 : Second Time, a naruto fanfic. Hello guys, here is another quick update I guess. It is the first time that I wrote a full chapter with battles, thanks for liking it. This chapter is more of a buildup for upcoming chapters.

Silgain: Kurama is grumpier in the early part of the story so it will take a bit time for him to open up. A Drop of Poison Chapter 21: Changes, a naruto fanfic. A Drop of Poison Chapter Twenty: Changes Disclaimer: Naruto belongs to Kishimoto. Ramen belongs to Naruto. Enough said. Once again, credit goes to Essex and Archeo Lumiere on SpaceBattles for Beta. Prank Day 114. The Many Minds of Namikaze Naruto Chapter 20: The Calm before the Storm, a naruto fanfic.

The Many Minds of Namikaze Naruto. Ordinary Event With Extraordinary Consequences Chapter 17: The Chunin Exams Begin, a naruto fanfic. AN: Well, here's another chapter. It's a little later than I expected, but since I'm fresh from another bender, I figured I might as well throw out some new material. Anyway, this chapter will entail some training, and maybe lead up to the chunin exams. Ino's house Kurai awoke to find Ino still sleeping on his chest, and he took a moment to simply admire her in the early morning light. He had often heard jealous remarks from his classmates, usually the weaker civilian boys who seemed to just fade into the background, wondering why Ino spent so much time around him; He couldn't help but agree. Naruto Senju: Hashirama's Heir Chapter 22: Captured, a naruto fanfic. Plucking Strings Chapter 20: Update, a naruto fanfic. I think I'm a Clone Now Chapter 1: Awakenings, a naruto fanfic.

Naruto Shippuuden: Botsuraku Chapter 2, a naruto fanfic. Disclaimer: I do not own Naruto Naruto flexed the muscles throughout his body as he yawned and stretched, slightly disturbing the sleep of his girls. Dark Phoenix of Konoha Chapter 39: A Dangerous Situation, a naruto fanfic. Hi everybody. I have now finally decided on what way to continue this story for the next few chapters, which should mean that I can update earlier than in three months. Sorry for letting you wait that long and enjoy the new chapter.