After and Before - Elsane - Sungkyunkwan Scandal. It was a foggy evening, not too cold, and most of the people on campus were busy plotting amusing ways to embarrass incoming freshmen. 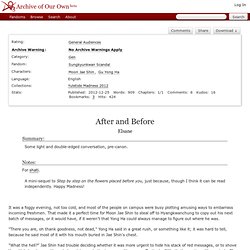 That made it a perfect time for Moon Jae Shin to steal off to Hyangkwanchung to copy out his next batch of messages, or it would have, if it weren't that Yong Ha could always manage to figure out where he was. Taken over by thoughts - Comeback in English! Fanart - Geol Oh / Yeorim. Solanyxe: Goo Yong Ha/Moon Jae Shin (Sungkyunkwan Scandal) - Two Thirds. I've been pondering a lot whether I should post this or not. 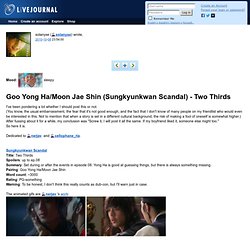 (You know, the usual embarrassment, the fear that it's not good enough, and the fact that I don't know of many people on my friendlist who would even be interested in this. Not to mention that when a story is set in a different cultural background, the risk of making a fool of oneself is somewhat higher.) After fussing about it for a while, my conclusion was "Screw it, I will post it all the same. If my boyfriend liked it, someone else might too.

" So here it is. Dedicated to nerjav and cellophane_ria. Sungkyunkwan ScandalTitle: Two ThirdsSpoilers: up to ep.08Summary: Set during or after the events in episode 08. Nerjav 's work: The porch in the East wing was not the most comfortable place to sit at night. The candles were still lit in some rooms, drawing shadowed silhouettes on the doors, and there were noises coming outside. One third consisted mostly of secrets people hoped nobody noticed, but Yong Ha always did. Break the Night - Mechanical_Orange - Sungkyunkwan Scandal. It’s more of a habit than anything else, visiting the gisaeng house. 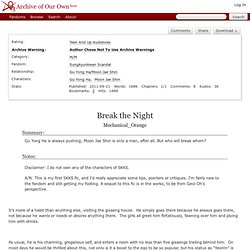 He simply goes there because he always goes there, not because he wants or needs or desires anything there. The girls all greet him flirtatiously, fawning over him and plying him with drinks. As usual, he is his charming, gregarious self, and enters a room with no less than five gisaengs trailing behind him. On most days he would be thrilled about this, not only is it a boost to the ego to be so popular, but his status as “Yeorim” is reinforced once again. But today is not most days, and though he is charming and witty on the outside, he feels hollow and listless within. The girls don’t notice, too intent are they with fondling the ties of his silken robes and caressing his soft white skin. Exchange - Zdenka - Sungkyunkwan Scandal. Gu Yong Ha sank into his seat with his usual poise and arranged his brilliantly colored robes about him. 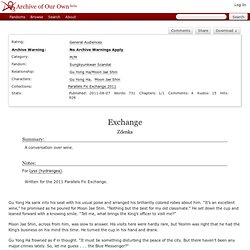 “It’s an excellent wine,” he promised as he poured for Moon Jae Shin. “Nothing but the best for my old classmate.” The Taming of a Crazy Horse - Rodo - Sungkyunkwan Scandal. Had Gu Yong Ha been the heroine of a romance novel, it would have been obvious to the reader that it was love at first sight when he first laid eyes on Mun Jae Shin. 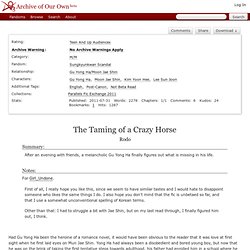 Yong Ha had always been a disobedient and bored young boy, but now that he was on the brink of taking the first tentative steps towards adulthood, his father had enrolled him in a school where he hoped Yong Ha would learn the basics of Confucian philosophy and make influential friends. Yong Ha however had other ideas. He found all his classmates boring and stupid, with the exception of a boy his age who always sat at the back of the room and never said a word. Said boy always wore the worst clothes, his hair was a mess and the sullen look on his face spoke of hidden depth – while also scaring all the other boys. In short, he was a mystery, and mysteries caused Yong Ha’s heart to beat faster.

The boy raised his head for a moment, before he decided not to answer at all. Embers - ainosenshi, fannore (ainosenshi) - Sungkyunkwan Scandal. There's a blurring of heat just beneath Yongha's skin whenever Jaeshin looks at him. 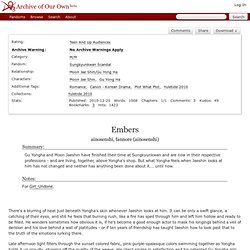 It can be only a swift glance, a catching of their eyes, and still he feels that burning rush, like a fire has sped through him and left him hollow and ready to be filled. He wonders sometimes how obvious it is, if he's become a good enough actor to mask his longings behind a veil of derision and his love behind a wall of platitudes - or if ten years of friendship has taught Jaeshin how to look past that to the truth of the emotions lurking there. Late afternoon light filters through the sunset colored fabric, pink-purple-opalesque colors swimming together as Yongha holds it up proudly, showing off the quality of the weave. His client smiles in satisfaction and his patented Gu Yongha grin accompanies the agreement that the woman's daughter will be clothed in his design for her engagement feast.

Faces of the Moon - slashedsilver - Sungkyunkwan Scandal. The moon shone down unforgiving on his face, as Jae Shin lay back with his head propped on his arm, and tried to get some sleep. 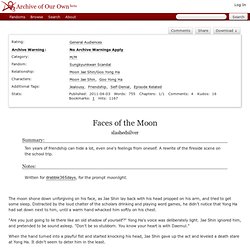 Distracted by the loud chatter of the scholars drinking and playing word games, he didn't notice that Yong Ha had sat down next to him, until a warm hand whacked him softly on his chest. "Are you just going to lie there like an old shadow of yourself? " For Now - slashedsilver - Sungkyunkwan Scandal. Moon Jae Shin is a study sometimes. 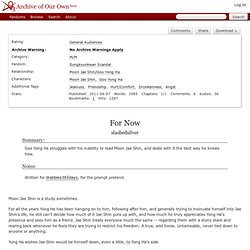 For all the years Yong Ha has been hanging on to him, following after him, and generally trying to insinuate himself into Jae Shin's life, he still can't decide how much of it Jae Shin puts up with, and how much he truly appreciates Yong Ha's presence and sees him as a friend. Jae Shin treats everyone much the same -- regarding them with a stony stare and rearing back whenever he feels they are trying to restrict his freedom.

A true, wild horse. Untameable, never tied down to anyone or anything. Yong Ha wishes Jae Shin would tie himself down, even a little, to Yong Ha's side. The Properties of Saving and Being Saved - slashedsilver - Sungkyunkwan Scandal. Sun Joon doesn't notice anything at first. 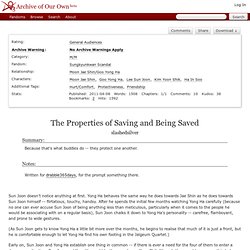 Yong Ha behaves the same way he does towards Jae Shin as he does towards Sun Joon himself -- flirtatious, touchy, handsy. After he spends the initial few months watching Yong Ha carefully (because no one can ever accuse Sun Joon of being anything less than meticulous, particularly when it comes to the people he would be associating with on a regular basis), Sun Joon chalks it down to Yong Ha's personality -- carefree, flamboyant, and prone to wide gestures. (As Sun Joon gets to know Yong Ha a little bit more over the months, he begins to realise that much of it is just a front, but he is comfortable enough to let Yong Ha find his own footing in the Jalgeum Quartet.)

Early on, Sun Joon and Yong Ha establish one thing in common -- if there is ever a need for the four of them to enter a dangerous situation, Sun Joon and Yong Ha would be the ones to go. "What happened? " "Don't worry," Yoon Shik says reassuringly. "Who did that to you? " In Sickness or in Health - slashedsilver - Sungkyunkwan Scandal. Sweating and shaking from the deep gash along his side, Jae Shin lies trembling with his head pillowed in Yoon Shik's lap. 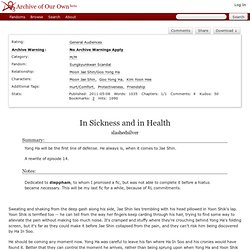 Yoon Shik is terrified too -- he can tell from the way her fingers keep carding through his hair, trying to find some way to alleviate the pain without making too much noise. Save Your Goodbye - TaMeaut - Sungkyunkwan Scandal. Title: Save your Goodbye Series: Sungkyunkwan Scandal Soundtrack: Save your Goodbye – Mike Posner Spoilers: - Time frame: Entire series (mixed up snippets) Summary: Sometimes what you call home is not a place, but a person. Sometimes what you call family is not your own blood. And sometimes silence speaks more than words. Excerpt: “The little lamp is flickering and shadows dance across Yong Ha's eyelashes and onto his cheeks. Jae Shin looks more intently as the shadow-play fascinates him and then it strikes him hard in his chest. Those are tears.” “Excuse me, your heart is in my heart” Emperor purple, soft peach pink, kingly crimson red, deep sea blue, spring sprout green.