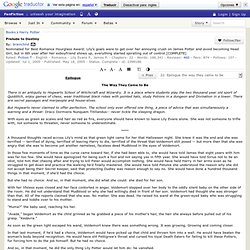 It is a place where students play the two thousand year old sport of Quidditch, enjoy games of chess, wear traditional black robes with pointed hats, study Potions in a dungeon and Divination in a tower. There are secret passages and merpeople and house-elves. But Hogwarts never claimed to offer perfection. With eyes as green as scales and hair as red as fire, everyone should have known to leave Lily Evans alone. A thousand thoughts raced across Lily's mind as that green light came for her that Halloween night. In those few moments of time as the curse came toward her, if she had been able to, she would have told James that eight years with him was far too few. But she had no choice. With her lifeless eyes closed and her face contorted in anger, Voldemort stepped over her body to the oddly silent baby on the other side of the room. "Muma? " "Excuse me? " "Calm down. " "No. "Why?

" "Families? " Day out with Benedict Cumberbatch, a parodies and spoofs fanfic. It's a wonderfully pretty Monday morning, and for a change you're actually early on your way to university, so you figure there is time to get a coffee from the nearest Starbucks. 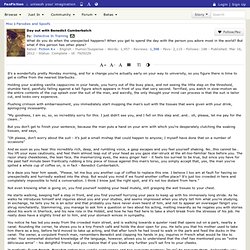 Holding your scalding vanilla cappuccino in your hands, you hurry out of the busy place, and not seeing the little step on the threshold, stumble hard, painfully falling against a tall figure which appears in front of you that very second. Terrified, you watch in slow-motion as the entire contents of the cup splash over the suit of the man, and weirdly, the only thought your mind can process is that the suit is tailor cut, and looks very expensive. Flushing crimson with embarrassment, you immediately start mopping the man's suit with the tissues that were given with your drink, apologizing incessantly. Deviancy is not a crime, it's a way of life. Archives. The Memories of Fallon Kinsey Figment. "Leave me alone--Potter. 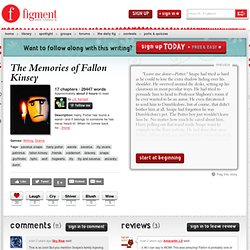 " Snape had tried as hard as he could to lose the extra shadow hiding over his shoulder. He swerved around the desks, setting up his classroom in most peculiar ways. He had tried to persuade him to head to Professor Slughorn's room if he ever wanted to be an auror. He even threatened to send him to Dumbledore, but of course, that didn't bother him at all. Snape had forgotten he was Dumbledore's pet. He shook the memory out of his head. "Please! Snape had been asking himself that question for a whole year. Snape grit his teeth together in a false smile and snatched the wand from Harry's outstretched arm. Under the Cool Shade of Virtue Chapter 1: Prologue, a harry potter fanfic. This story is not a nice one, obviously...none of my stories are, really. 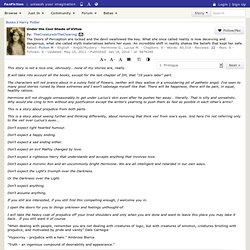 It will take into account all the books, except for the last chapter of DH, that "19 years later" part. The characters will not prance about in a sunny field of flowers, neither will they wallow in a smouldering pit of pathetic angst. I've seen to many good stories ruined by these extremes and I won't sabotage myself like that. There will be happiness, there will be pain, in equal, healthy rations. Hermione will not struggle unreasonably to get under Lucius's skin even after he pushes her away… literally. 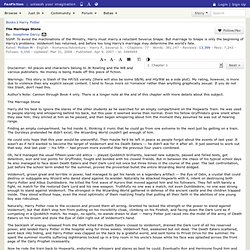 No money is being made off this piece of fiction. Warnings: This story is Slash of the HP/SS variety (there will also be some SB/RL and HG/RW as a side plot). My rating, however, is more due to violence than any explicit sexual content. I tend to focus more on 'romance' rather than anything graphically sexual.

If you do not like Slash, don't read this. Author's Note: Cannon through Book 4 only. The Marriage Stone Harry did his best to ignore the stares of the other students as he searched for an empty compartment on the Hogwarts Train. Finding an empty compartment, he hid inside it, thinking it ironic that he could go from one extreme to the next just by getting on a train.