Down the Shore Everything's All Right - thehoyden - Hawaii Five-0 (2010. Make a Move ('Cause I Ain't Got All Night) - stillane - Hawaii Five-0 (2010) Main Content <p id="javascript-warning"> While we&#x27;ve done our best to make the core functionality of this site accessible without javascript, it will work better with it enabled. 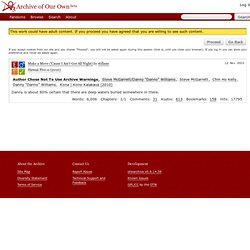 Please consider turning it on! </p> Archive of Our Own beta Log In Site Navigation This work could have adult content. If you accept cookies from our site and you choose "Proceed", you will not be asked again during this session (that is, until you close your browser). Footer Close. If You Were a Laser, You'd Be Set on 'Stunning' - shrift - Hawaii Five-0 (2010)

"Whoa, whoa, whoa," Danny yelled, waving his hand in front of Steve's face while trying to keep at least one eye on the road. 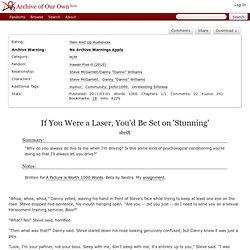 Steve stopped mid-sentence, his mouth hanging open. "Are you -- did you just -- do I need to send you on a sexual harassment training seminar, Boss? " "What? No! " Steve said, horrified. "Then what was that? " Future Sex / Love Sounds - Saucery - Hawaii Five-0 (2010) The third time Danny hears 'Sexy Eyes' on the way to HQ, he realizes that maybe it isn't a coincidence. 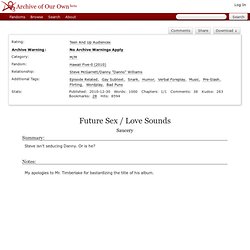 No, it definitely isn't a coincidence. That isn't the radio, anymore; it's a goddamn CD. The bastard went out and bought the very thing Danny had expressly told him - vehemently told him - never, ever to put on again. But here it is. For the third time running. "You know," Danny says, conversationally, in the mildly murderous tone that's become a habit around McGarrett, "if you play that fucking song one more fucking time, I'm going to start thinking you're seducing me.

"Seducing you? " "What guy voluntarily listens to - to 'Sexy Eyes' while trapped in a confined space with another guy? " "Are you questioning my heteronormativity? " "I don't even want to know how many syllables that word has. "Eight. " "Wonderful. Timing Is Everything - elandrialore - Hawaii Five-0 (2010) If it was going to happen, it probably would have happened by now. 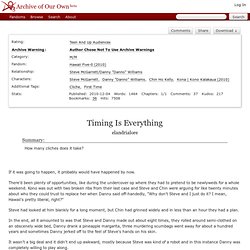 There’d been plenty of opportunities, like during the undercover op where they had to pretend to be newlyweds for a whole weekend. Kono was out with two broken ribs from their last case and Steve and Chin were arguing for like twenty minutes about who they could trust to replace her when Danny said off-handedly, "Why don't Steve and I just do it? I mean, Hawaii's pretty liberal, right? " Steve had looked at him blankly for a long moment, but Chin had grinned widely and in less than an hour they had a plan. In the end, all it amounted to was that Steve and Danny made out about eight times, they rolled around semi-clothed on an obscenely wide bed, Danny drank a pineapple margarita, three murdering scumbags went away for about a hundred years and sometimes Danny jerked off to the feel of Steve's hands on his skin.

"Why do they all looked dead? " Say My Name - elandrialore - Hawaii Five-0 (2010) The problem is that Danny doesn't react well to drugs. 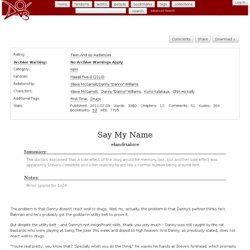 Well, no, actually, the problem is that Danny's partner thinks he's Batman and he’s probably got the goddamn utility belt to prove it. But despite the utility belt – and Danny's not insignificant skills, thank you very much – Danny was still caught by the rat bastards who were playing at being The Joker this week and doped to high heaven. And Danny, as previously stated, does not react well to drugs. After the sky flashes, the sea yearns - elandrialore - Hawaii Five-0 (2010) It's late and the hallway is quiet except for the occasional squeak of shoes or the low beep of monitors. 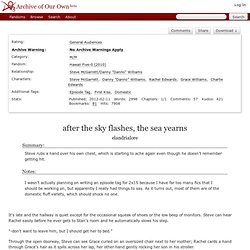 Steve can hear Rachel easily before he ever gets to Stan's room and he automatically slows his step. "-don't want to leave him, but I should get her to bed. " Through the open doorway, Steve can see Grace curled on an oversized chair next to her mother; Rachel cards a hand through Grace's hair as it spills across her lap, her other hand gently rocking her son in his stroller. Someone to Hold On To - elandrialore - Hawaii Five-0 (2010) Steve is too wired for sleep. 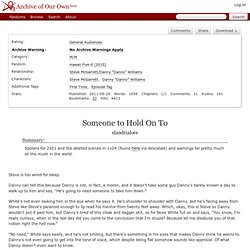 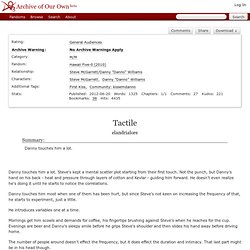 Steve's kept a mental scatter plot starting from their first touch. Stay Close - sheafrotherdon - Hawaii Five-0 (2010) Grace sighs into Danny's shoulder when he picks her up, yawns as he walks toward the stairs at Steve's place, cradling her in his arms. 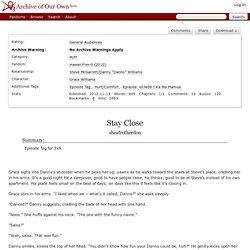 It's a good night for a sleepover, good to have people close, he thinks; good to be at Steve's instead of his own apartment. His place feels small on the best of days; on days like this it feels like it's closing in. Grace stirs in his arms. Freckles and Fingertips - imaginary_iby - Hawaii Five-0 (2010) Each Moment - thegrrrl2002 - Hawaii Five-0 (2010. "Thank you," Danny says as the waiter arranges the plates on the table--scrambled eggs, pancakes, sausage, buttered toast. 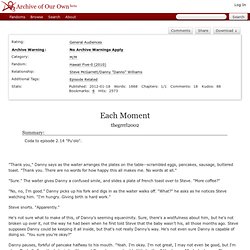 "Thank you. There are no words for how happy this all makes me. No words at all. " "Sure. " The waiter gives Danny a confused smile, and slides a plate of french toast over to Steve. Hug Ninja - Chapter 1 - esteefee - Hawaii Five-0 (2010. Chapter Text "What was that? What? " Steve gave him a way too innocent look. "You think I wouldn't notice that? Getting the stuffing squished out of me? " "Well...what can I say? " "I needed a—so explain to me, please, because I'm wondering here—this is what my government spent millions on? Scared Silly - stellarmeadow - Hawaii Five-0 (2010. Painkillers made it clear - kshvoon - Hawaii Five-0 (2010. Danny hobbled back to his office. He sat down, flexing his arm. He got shot. Again. It was Steve’s fault. Again. So Danny got shot; not to mention the kick to the knee he took before he slammed the perp down and cuffed him. To put it nicely, Danny was fuming.

Popping a couple of Advil, he tried settling down to begin the reams of paperwork for the bust. 'Hey Danny, I'm heading to the Governor's office now, she wants a debrief of the case. Since Danny has been spending nights at Steve’s semi-regularly, they have started coming into work in one car. Five thirty came and went; still no sign of Steve. Steve and Danny fell into bed one drunken night; and had become regular fuck buddies. The next time Danny looked up, it was completely dark outside. Calls to both his mobile and house phone went to voicemail. I wanna do right (but not right now) - dogeared - Hawaii Five-0 (2010. Steve's not home. He should be, but he's not—Danny makes a circuit of the first floor, pokes his head upstairs, calls out and knocks on the wall halfheartedly with his knuckles on his way back down when he doesn't find Steve, just in case the goof is hiding somewhere and trying to prove a point, but there's no movement and no answer, and everything stays quiet.

He's about to give up—he jingles his keys in his pocket and glances out the back door, scanning the water and not seeing anything there, either, and then Danny nearly has a heart attack when he spots Steve, flat on his back in the grass behind the house. He's in motion before he's even conscious of it, every single worst-case scenario elbowing for room in his thoughts—maybe Steve had a heart attack, or a stroke, or maybe he got shot, god, did he get shot, is Danny going to get shot?

"Did you slice off a digit, Steven? " They do, and it's only a little bit weird, and Danny finally wills his body to calm the fuck down.