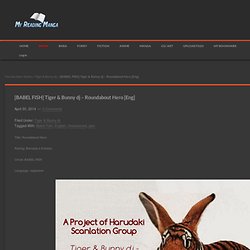 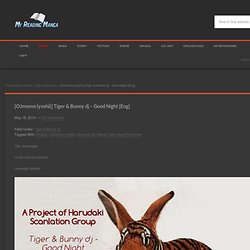 [Shiro Note] Tiger & Bunny dj - Atarashii Hibi. No, you’re not the only one who like Bunny as the tachi better. 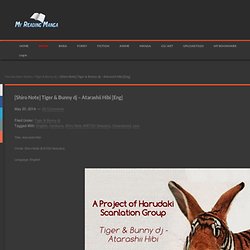 For me, its just that Bunny has this sexy, cool quality that is often depicted in the anime that tend to stay true to his character if he is the seme. Sure Bunny can be childish and cute but that usually last for a short moment. Most of the time he is level headed and is not as easy to work up as Tiger. Now, I definitely prefer that the old man is the neko, just because I think older guys being neko is super sexy. But if you think about it, Kotetsu is easily work up and is the more emotional one of the bunch, which is a very uke quality. Great Stories Never End. One Thousand Paper Cranes - Kantayra - Tiger & Bunny. When Tomoe was ill, Kotetsu sat up by her bed for nights on end, his big, clumsy hands fumbling with each new sheet of paper. 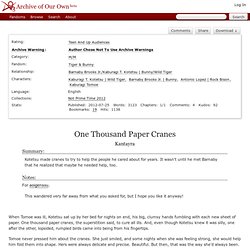 One thousand paper cranes, the superstition said, to cure all ills. And, even though Kotetsu knew it was silly, one after the other, lopsided, rumpled birds came into being from his fingertips. Tomoe never pressed him about the cranes. Puzzle Pieces - animehead - Tiger & Bunny. Deadweight - CaptainZiggs - tiger & bunny/タイガー＆バニー. Kotetsu will not become a deadweight. 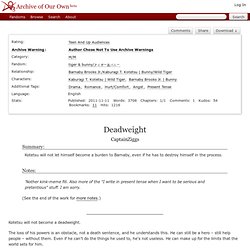 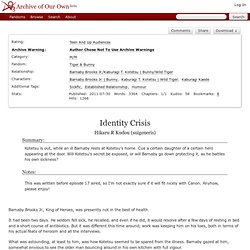 It had been two days. He seldom fell sick, he recalled, and even if he did, it would resolve after a few days of resting in bed and a short course of antibiotics. But it was different this time around; work was keeping him on his toes, both in terms of his actual feats of heroism and all the interviews. What was astounding, at least to him, was how Kotetsu seemed to be spared from the illness. Barnaby gazed at him, somewhat envious to see the older man bouncing around in his own kitchen with full vigour. "You don't have to do this, you know," Barnaby croaked. "What's wrong in taking care of my partner - in more than one sense of the word - while he's sick? " "But we can just do this at my place. " "No, we can't. Barnaby blushed. So yes, the safest place would be Kotetsu's own home. Barnaby coughed again, and he shivered. "Do you have to wear that? " "Of course," said Barnaby, his eyebrows furrowing.

Actions Speak Louder Than Words - galerian_ash - Tiger & Bunny. "This is your last chance," Barnaby said, as he held up the razor in front of Kotetsu's face. 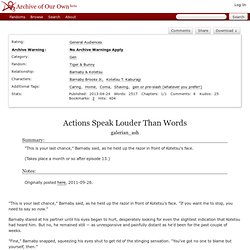 "If you want me to stop, you need to say so now. " Barnaby stared at his partner until his eyes began to hurt, desperately looking for even the slightest indication that Kotetsu had heard him. But no, he remained still — as unresponsive and painfully distant as he'd been for the past couple of weeks. "Fine," Barnaby snapped, squeezing his eyes shut to get rid of the stinging sensation. "You've got no one to blame but yourself, then. " Lost and Found - galerian_ash - Tiger & Bunny. There is a first time for everything - galerian_ash - Tiger & Bunny.

A few hours into the makeshift celebration, Barnaby decided to put an end to it. 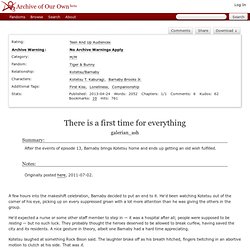 He'd been watching Kotetsu out of the corner of his eye, picking up on every suppressed groan with a lot more attention than he was giving the others in the group. He'd expected a nurse or some other staff member to step in — it was a hospital after all; people were supposed to be resting — but no such luck. They probably thought the heroes deserved to be allowed to break curfew, having saved the city and its residents. A nice gesture in theory, albeit one Barnaby had a hard time appreciating. Kotetsu laughed at something Rock Bison said. Barnaby stood up in one fluid motion. Embers Upon Hearth - takadainmate - Tiger & Bunny. The hospital room they'd hidden Kotetsu away in was a small, airless thing that smelled too strongly of bleach mixed with all the flowers the other Heroes had sent. 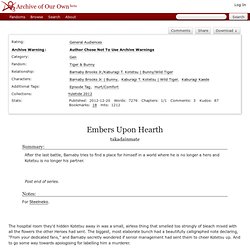 The biggest, most elaborate bunch had a beautifully calligraphed note declaring, "From your dedicated fans," and Barnaby secretly wondered if senior management had sent them to cheer Kotetsu up. And to go some way towards apologising for labelling him a murderer. Unwritten - amuk - Tiger & Bunny. Pink “You forgot something.” 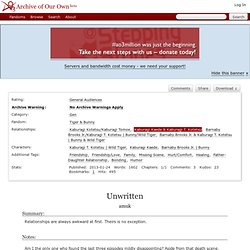 Kotetsu is behind him, grabbing his shoulder and spinning him around before Barnaby can react. Brushing off his hand, Barnaby frowns at the older man, his body tense from the unexpected contact. “What?” He spat out through clenched teeth. The worse the passage, the more welcome the port - bob_fish - Tiger & Bunny. Cold as Charity - bob_fish - Tiger & Bunny. "It's your own fault," Barnaby says, apropos of nothing. "What's my fault? " Kotetsu says. "I didn't even say anything. " "It's your own fault that you didn't bring a jacket.

Signature - Anonymous - Tiger & Bunny. Signature The first time Kotetsu had ever been asked for his autograph had been shortly after Tomoe realized she was pregnant, and Kotetsu had been riding the high of fatherhood almost too much to notice the occasion. It had been a boy who asked, a short kid with a ball cap passing him on the sidewalk and tugging on his vest for attention, something Kotetsu found startling enough that he nearly stumbled. The boy couldn't have been more than twelve, and his hands shook as he held out the trading card and pen, smiling a gap toothed smile when Kotetsu accepted it with a flush luckily hidden by his mask.

Although Kotetsu had been expecting the request for months with all the arrogance of Sternbild's top hero, the reality—that he was famous, that he was doing good, that he was a hero—was a bit beyond what he'd anticipated. In the end, his hands trembled just slightly, making his hero name of Wild Tiger come out looking far different than his signature on all of his Justice Bureau paperwork.

We Gave It All To The Fire - Memlu - Tiger & Bunny. In the space between each of his eyelashes, fire remained; smoke lingered beneath his eyelids. Through that haze, what might he see? Only a child's Jack o' lantern, a shadow puppet cast against a burning wall, a pillar of ash with a sparking Glasgow smile. The weight of twenty years cracked in his bones. Kotetsu spoke. His voice was low, hoarse, soft too. "I can understand your frustration, but you need to relax.

" What Matters, a tiger & bunny/タイガー＆バニー fanfic. He watches him in silence, counts the marks on his skin and thinks "there should be only one"; he thinks "there shouldn't be that many, there can't be that many, he wouldn't risk his life for just anyone" but even as he's thinking it, he knows it's not true. Kotetsu would do it – is doing it, every day, and has the bruises and the scrapes to prove it.

He lives for everyone but himself and he would forfeit his own life in a second if it helped save another's. It's just the way he is. It's just the way he is, and Barnaby hates him for it; he hates him for it as much as he loves him for everything else. Close your eyes, a tiger & bunny/タイガー＆バニー fanfic. Kotetsu likes Barnaby best when he's in repose. Usually he's at the computer when he's like that, but now, he's sprawled out in bed, a book in his lap, leaning his back into the headboard. He looks content like this – happy, if Kotetsu can spare the word, and it brings a faint, goofy smile to his face, thinking about how he's part of why Bunny looks so happy, and how good it feels to think of the younger man like that for a change. Loathe as he is to disturb Barnaby, Kotetsu can't help but want to be closer.

He remains at a distance for a moment, folding laundry, taking his time to watch Barnaby out of the corner of his eye – watching down to the way the blond's fingers pluck at the pages of his book, long and careful and elegant, the way his head cocks a little bit and the way his hair falls over his eyes, over his glasses before he reaches up to push it aside once more. A love remembered, a tiger & bunny/タイガー＆バニー fanfic. Bunny has a way of doing certain things that can only be called cute. Kotetsu bites his tongue most of the time. Has to, lest Bunny get pissed at him for calling him cute all the time – but isn't that better than calling him not cute?

Ah, he digresses. Bunny's cute, no two ways about it, and Kotetsu likes watching him, picking out the certain way in which he does things that makes it also endearing. It's little stuff. Basically, unless he's warm. There are other things – the way in which he flushes over cooking failures, over cut fingers and proverbial spilt milk. Perilous stranger, a tiger & bunny/タイガー＆バニー fanfic. There's a bit of pleasure that comes with knowing you have something that others want, but can't have.

That's the case at the moment, having been dragged out of the house for once and to a bar that Barnaby certainly would never frequent with any sort of regularity. Kotetsu insisted, however, and once in awhile, Barnaby does find himself inclined to humor him, if only to avoid a few hours of grumbling (read: if only to keep the man properly happy, which was far more important than his own desire for silence and the solace of his laptop). The winds of change, a tiger & bunny/タイガー＆バニー fanfic. Barnaby really doesn't know the slightest about how to act in relationships. The idle chick flicks he's watched for half a minute while flipping through channels yield little results, and why should they, anyway?

Contrived messes, all of them, and Barnaby can't help but put his nose in the air at the concept of even using that sort of material as a reference. That being said, he's still quite lost. It's a cold, rainy day when he and Kotetsu leave the Apollon Media building, and Barnaby, always, firmly prepared after checking the weather that morning, can't help but notice how Kotetsu simply isn't. NoChick_Fics' Fanfiction Journal - Morning Musing. n659vo.jpg (JPEG Image, 1280 × 1280 pixels) - Scaled (73. Ephemeral Smiles - Chapter 1 - orphan_account - Tiger & Bunny. Chapter Text “How could you let this happen?” Agnes’ eyes are bloodshot, her make-up blotchy and flaking. She grabs a fistful of Kotetsu’s shirt to bring him close enough to bite his head off. A sharp acrylic fingernail stabs at his sternum.

In the Name of the Moon - futuresoon - Tiger & Bunny. "So this is--what did you say we were watching again? " Keith asks. He hadn't quite understood why Ivan had asked him over in the first place, but, in the interests of friendship, he didn't even consider questioning it. Friends spend time together and share each other's interests, yes? Spun of Starlight and Gold - Cosmic_Biscuit - Tiger & Bunny. An icy wind threatened to cut him to the bone, and he huddled deeper into his heavy fur coat, swearing under his breath. For the third time in as many minutes, he cursed the ill turn of luck that had landed him in this territory, and the bad-tempered noble who’d sent him back out into the storm.