Of A World Made by Things You Never Know - isuilde - Karneval. Yogi’s kisses are always, always careful. 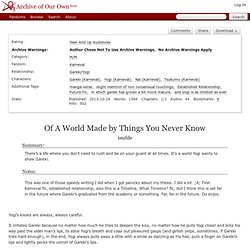 It irritates Gareki because no matter how much he tries to deepen the kiss, no matter how he pulls Yogi closer and licks his way past the older man’s lips, to steal Yogi’s breath and coax out pleasured gasps (and girlish yelps, sometimes, if Gareki tries hard enough), in the end, Yogi always pulls away a little with a smile as dazzling as his hair, puts a finger on Gareki’s lips and lightly pecks the corner of Gareki’s lips. The last gesture always feels like a gratitude; one that Gareki never understands. Yogi’s kisses are slow, a soft press against Gareki’s own lips that moves in time with each heartbeat. Sunflower - calloutyoru - Karneval. Sunflower He was being consumed by nightmares again. 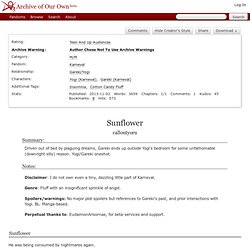 In the hazy country of dreams he was back where it all started, running aimlessly down the path of destruction. He struggled to breathe among the ruins of that heartless place, roaming the dark streets of a nameless town. There, where he would find a lifeless woman under the smattering rain, her broken body painted in red. Sea Song - yatagarasuoh - Karneval. The Lovers, a karneval/カーニヴァル fanfic. 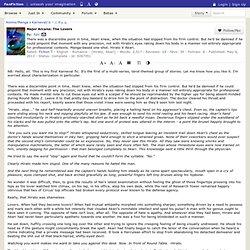 This is my first Karneval fic. It's the first of a multi-series, tarot-themed group of stories. Let me know how you like it. I'm worried about characterization in particular. There was a discernible point in time, Akari knew, when the situation had slipped from his firm control. "Hirato…stop... " he said half-heartedly around uneven breaths, placing a halting hand on his aggressor's chest. "Are you sure you want me to stop? " He tried to say the word "stop" again and found that he couldn't form the syllable. Clearly Hirato made him stupid. And the next thing he remembered was the captain's hands holding him steady as he came apart spectacularly, mouth open in a cry of pleasure, eyes clamped shut, and back arched gracefully as long, powerful fingers left tiny bruises along his hipbone.

Really, that Hirato was shameless. Lovers. He sat down, huffily crossing one long leg over the other and trying to ignore the creeping feeling of being visually undressed. The care and feeding of - luova_tauko - Karneval. "I'm sorry for intruding," Tsukumo says and bows politely. 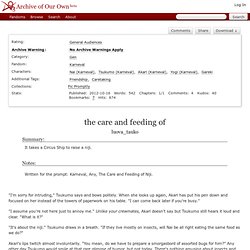 When she looks up again, Akari has put his pen down and focused on her instead of the towers of paperwork on his table. "I can come back later if you're busy. " "I assume you're not here just to annoy me. " Unlike your crewmates, Akari doesn't say but Tsukumo still hears it loud and clear. "What is it? " "It's about the niji. " Akari's lips twitch almost involuntarily. "Thank you. " "So you see," Yogi says with a flourish to the sheep he's gathered around him. The sheep stare at him impassively until one of them says, "We were doing a bad job -baa? "No no no no no! " "Humans are also delicate," the sheep Yogi is cradling says. Yogi looks at the serious little faces around him and smiles.

Waking Up to Coffee, a karneval/カーニヴァル fanfic. Akari has a very pretty face. 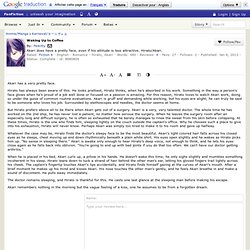 Hirato has always been aware of this. He looks prettiest, Hirato thinks, when he's absorbed in his work. Something in the way a person's face glows when he's proud of a job well done or focused on a passion is amazing. For this reason, Hirato loves to watch Akari work, doing so under the guise of common routine evaluations. Akari is gruff and demanding while working, but his eyes are alight; he can truly be said to be someone who loves his job.

But Hirato prefers above all to be there when Akari gets out of a surgery. Whatever the case may be, Hirato finds the doctor's sleepy face to be the most beautiful. A Moment to Breathe, a karneval/カーニヴァル fanfic. Breaks happen very rarely for Hirato and Akari. 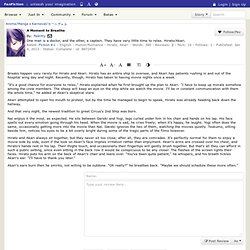 Hirato has an entire ship to oversee, and Akari has patients rushing in and out of the hospital wing day and night. A Bit of Understanding, a karneval/カーニヴァル fanfic. Cuddling is an activity Hirato and Akari do not often attempt. 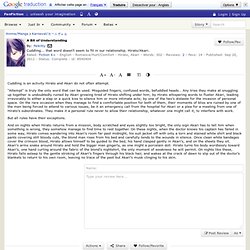 "Attempt" is truly the only word that can be used. Misguided fingers, confused words, befuddled heads… Any tries they make at snuggling up together is undoubtedly ruined by Akari growing tired of Hirato shifting under him; by Hirato whispering words to fluster Akari, leading irrevocably to either a slap or a quick kiss to silence him or more intimate acts; by one of the two's distaste for the invasion of personal space. On the rare occasion when they manage to find a comfortable position for both of them, their moments of bliss are ruined by one of the men being forced to attend to various issues, be it an emergency call from the hospital for Akari or a plea for a meeting from one of Hirato's subordinates. They make it a personal rule never to allow their relationship, whatever one might call it, to interfere with work.