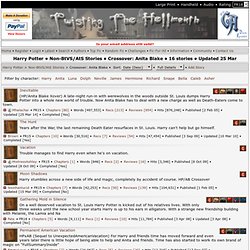 Louis dumps Harry Potter into a whole new world of trouble. Now Anita Blake has to deal with a new charge as well as Death-Eaters come to town. Years after the War, the last remaining Death Eater resurfaces in St. Louis. Harry can't help but go himself. Trouble manages to find Harry even when he's on vacation. Harry stumbles across a new side of life and magic, completely by accident of course. On a well deserved vacation to St. HPxAB (Sequel to UnexpectedAmericanVacation) For Harry and friends time has moved forward and even years later there is little hope of being able to help and Anita and friends.

Someone finds baby Harry after he is left on his Aunts doorstep and takes him in. HPxAB (H/L/N, A/Var) Instead of holding back, Harry unleashed his temper on both Bellatrix and Voldemort in the Department of Mysteries. Port of the Snape/Harry Ship. Where in the World is Harry Potter? Chapter 1: Prologue, a harry potter fanfic. Browncoat, Green Eyes CHAPTER THIRTY EIGHT: It Has to End, a Harry Potter and Firefly crossover fanfic. Disclaimer: I own nothing; Harry Potter and the elements of his universe all belong to J.K.Rowling. 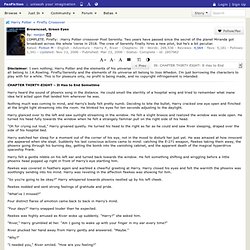 Firefly/Serenity and the elements of its universe all belong to Joss Whedon. I'm just borrowing the characters to play with for a while. This is for pleasure only, no profit is being made, and no copyright infringement is intended. CHAPTER THIRTY-EIGHT – It Has to End Sometime Harry heard the sound of phoenix song in the distance. Nothing much was coming to mind, and Harry's body felt pretty numb. Harry glanced over to the left and saw sunlight streaming in the window. "Oh for crying out loud," Harry groaned quietly. Harry watched her sleep for a moment out of the corner of his eye, not in the mood to disturb her just yet. Harry McGonagall Chapter 22: American Summer, a harry potter fanfic. Harry Potter and all characters, etc Harry Potter and all characters, etc. belong to J.K. 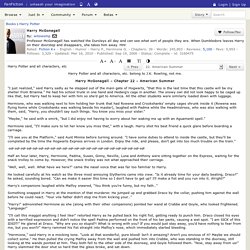 Rowling, not me. Harry McGonagall – Chapter 22 – American Summer "I just realized," said Harry sadly as he stepped out of the main gate of Hogwarts, "that this is the last time that this castle will be my shelter from Brianna. " He had his school trunk in one hand and Hedwig's cage in another. Hermione, who was walking next to him holding her trunk that had Rowena and Crookshanks' empty cages shrunk inside it (Rowena was flying home while Crookshanks was walking beside his master), laughed with Padma while the Headmistress, who was also walking with them, said, "Harry, you shouldn't say such things. "Maybe," he said with a smirk, "but I did enjoy not having to worry about her waking me up with an Aguamenti spell.

" Hermione said, "I'll make sure to let her know you miss that," with a laugh. "I'll see you at the Platform," said Aunt Minnie before turning around. "Well, well, well.

The Founders' Heir Chapter 1: Privet Drive, a harry potter fanfic. A/N UPDATE Oct 2008: There is a programming problem with a few later chapters with the way I marked Parseltongue speech (ss,Parseltongue,ss) that cropped up with FF net's new formatting changes (apparently it doesn't like periods). 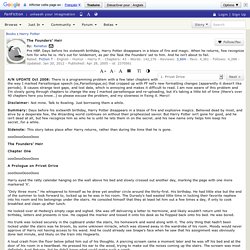 It causes strange text gaps, and lost data, which is annoying and makes it difficult to read. I am now aware of this problem and I'm slowly going through chapters to change the way I marked parseltongue and re-uploading, but it's taking a little bit of time (there's over 40 chapters here you know…) so please excuse the problem, and my slowness in fixing it. Merci! Disclaimer: Not mine. Talk to Rowling. BlueSkyeCloud9. Sort: Category . 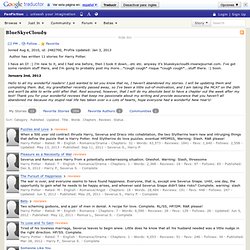 2012 Calendar / Wall Desk Calendars. Top Fan Fiction. After the events of graduation go horribly wrong, Buffy leaves Sunnydale for another future COMPLETE: An escaped Goa'uld, and rather sadistic Powers to Be, bring Xander out of the dubious security of his quaint little demon filled world, and into a not so quaint alien filled star system. 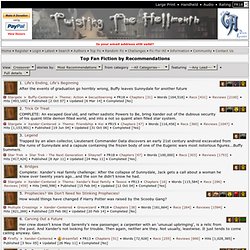 Trapped by an alien collector, Lieutenant Commander Data discovers an early 21st century android excavated from the ruins of Sunnydale and a capsule containing the frozen body of one of the Eugenic wars most notorious figures...Buffy Summers. Complete: Xander's real family challenge: After the collapse of Sunnydale, Jack gets a call about a woman he knew over twenty years ago...and the son he didn't know he had. How would things have changed if Harry Potter was raised by the Scooby Gang? Her crew doesn't know that Serenity's new passenger, a carpenter with an 'unusual upbringing', is a relic from the past. Buffy did not survive her confrontation with the First. Xander is chosen...