Crazy, but that’s how it goes - Schreibblockade - Glee. Undying Love Series - Talwyn - Glee. While You Were Sleeping, a glee fanfic. A/N: So, this is a fic I wrote for a prompt over at lj's glee_kink_meme. 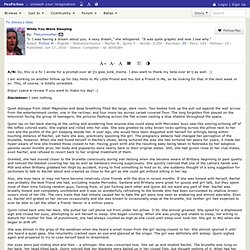 I also want to thank my beta over at lj as well. :) I am working on another follow up for Say Hello to My Little Friend and You Got a Friend in Me, so be looking for that in the next week or so. This, of course, is totally unrelated. Enjoy! Leave a review if you want to make my day! Disclaimer: I own nothing Quiet dialogue from Steel Magnolias and deep breathing filled the large, dark room. Quinn lay on her back staring at the ceiling and wondering how anyone else could sleep with Mercedes' buzz saw-like snoring echoing off of the toffee colored walls. Granted, she had moved closer to the brunette consciously during Van Helsing when she became aware of Brittany beginning to pant quietly and noticed the blanket covering her lap as well as Santana's moving suspiciously. Also, she may have or may not have become relatively close friends with the diva in recent months. Quinn rolled back onto her back. Better Where It's Wetter Chapter 1, a glee fanfic. 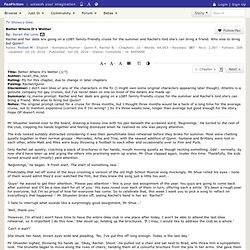 Author: recall_the_loveRating: PG for this chapter, due to change in later chaptersPairing: Rachel/QuinnDisclaimer: I don't own Glee or any of the characters in the fic (I might own some original characters appearing later though). Atlantis is a geniune company for gay cruises, but I've never been on one so most of the details are made up.Summary: rq_meme prompt: Rachel and her dads are going on a LGBT family-friendly cruise for the summer and Rachel's told she's can bring a friend. Who else to bring but Quinn? Notes: The original prompt called for a cruise for three months, but I thought three months would be a heck of a long time for the average cruise, not to mention expensive (correct me if I'm wrong? ) So it's three weeks now, longer than average but good enough for the story.

Mr Shuester leaned over to the board, drawing a messy line with his pen beneath the scrawled word, 'Beginnings.' 'Beginnings,' he began. Reading Material, a glee fanfic. Disclaimer: I own nothing. 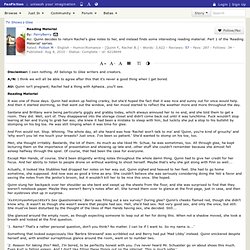 All belongs to Glee writers and creators. A/N: I think we will all be able to agree after this that it's never a good thing when I get bored. AU: Quinn isn't pregnant; Rachel had a thing with Aphasia…you'll see. Reading Material It was one of those days. Santana and Brittany were being particularly giggly and grabby today, which always annoyed her to no end, and she told them to get a room. And Finn would not. Men, she thought irritably. Except Man Hands, of course. Actually, it looked like Stubbles had dropped her notes on her way out. Quinn slung her backpack over her shoulder as she bent and swept up the sheets from the floor, and she was surprised to find that they weren't notebook paper. 'XxX41myeohmye14XxX's Sex Questionnaire.' She glanced around the empty room, as though expecting someone to leap out at her for doing this. '1. 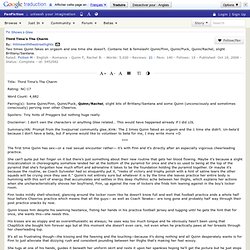 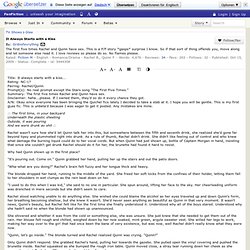 "Summary: The first five times Rachel and Quinn have sex.Disclaimer: haha...please. If I owned them, they'd so do it every chance they got.A/N: Okay since everyone has been bringing the Quichel fics lately I decided to take a stab at it. I hope you will be gentle. This is my first gLee fic. This is unbeta'd because I was eager to get it posted. :: The first time, in your backyardUnderneath the plastic sheetingOutside, it was pouringAnd we were drunk as shit :: Rachel wasn't sure how she'd let Quinn talk her into this, but somewhere between the fifth and seventh drink, she realized she'd gone far beyond tipsy and plummeted right into drunk.

Why had Quinn shown up in the first place?