Beyond All Telling - Harmony - True Blood. It’s hard to feel anything but heaviness, with Isabel hovering too closely at his side in hesitant concern and Nan Flanagan eyeing him intensely enough to drill holes into his skull – but then again, he is sitting there in her suite with little welcome, and even though this is more his dwelling-place than hers he still feels the uncomfortable weight of being looked at as an outsider. 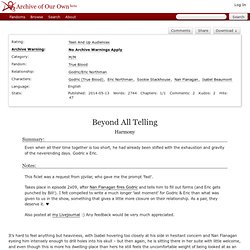 The room feels somewhat chilly even for him, and smells like crisp, expensive perfume, almost a mark of Flanagan’s detachment, the perfectly cold picture of logic and politics and judgment behind keen narrowed eyes. ‘Are you done?’ She asks impatiently. He turns his eyes to her briefly, taking in the distaste in her voice and her features. ‘Almost.’ Isabel’s eyes gleam with indignation at the displayed impatience for a moment, and Godric is more than grateful that she chooses to rein herself in instead of saying anything.

‘I’m done.’ ‘What happened?’ Godric allows himself a barely-there smile. ‘I wouldn’t. Generations Of Brilliance - Harmony - True Blood. When Godric comes around to the new office, he observes it to be surprisingly cozy despite its relatively small dimensions; it's currently empty and almost completely unfurnished, with unpacked boxes sitting in the corner and a thin layer of dust covering the singular desk in the middle of the room. 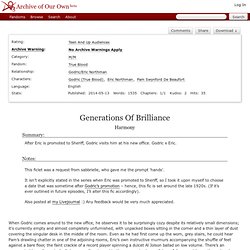 Even as he had first come up the worn, grey stairs, he could hear Pam’s drawling chatter in one of the adjoining rooms, Eric’s own instructive murmurs accompanying the shuffle of feet against a bare floor, the faint crackle of a record player spinning a dulcet Al Jolson ballad on low volume. There’s an unexpected homeliness to it all, in no small part owed to the occupants; he can’t have felt more at home than when he spots his progeny for the first time in weeks, crisp white suit open and shirt buttons halfway undone, his face and shoulders relaxed and comfortably easy as he’ll always be. Fótr - Fuinixe - True Blood [Archive of Our Own] - Comodo IceDragon.

The first time Eric reached for Godric’s feet, Godric flinched away and stared him down. 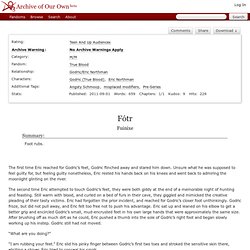 Unsure what he was supposed to feel guilty for, but feeling guilty nonetheless, Eric rested his hands back on his knees and went back to admiring the moonlight glinting on the river. The second time Eric attempted to touch Godric’s feet, they were both giddy at the end of a memorable night of hunting and feasting. Still warm with blood, and curled on a bed of furs in their cave, they giggled and mimicked the creative pleading of their tasty victims. Eric had forgotten the prior incident, and reached for Godric’s closer foot unthinkingly. Godric froze, but did not pull away, and Eric felt too free not to push his advantage. “What are you doing?” Tempus Edax Rerum - Roman - True Blood. Father, Brother, Child - Cousin Shelley (CousinShelley) - True Blood. That rush Eric felt when he'd first seen Godric in the basement at The Fellowship of the Sun, he felt it again as Godric stepped up behind him. 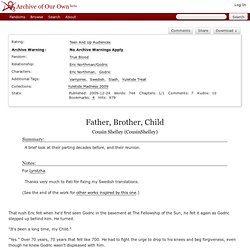 He turned. "It's been a long time, my Child. " "Yes. " Over 70 years, 70 years that felt like 700. He had to fight the urge to drop to his knees and beg forgiveness, even though he knew Godric wasn't displeased with him. "When we've dealt with the humans, we must spend some time, Eric. "Acceptable? He never strayed far from Godric while they were dealing with the humans, as Godric called it. He watched his master, awed as he always had been that a creature seemingly so small and slight could be one of the most powerful forces on the planet. Cougar, yup. - Fic: Feels Like I've Always Known You (NC17) Requiem Chapter 1: The Marionette, a true blood fanfic.

Author's Note: This began as a humble novelization of the Dallas scenes in the True Blood episodes "Timebomb" (2x08) and "I Will Rise Up" (2x09), but has slowly morphed into my take on how Eric's moral barriers were broken down as he moved through his life as a vampire and how Godric has come to regret his hand in that. 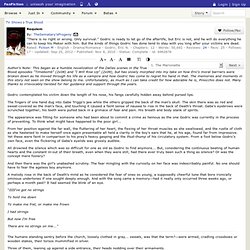 The memories and moments in this story not seen on the show belong to me. Unfortunately, as much as I can take credit for how adorable he is, Pinocchio does not. Many thanks to irrevocably-twisted for her guidance and support through the years. Godric contemplated his victim down the length of his nose, his fangs carefully hidden away behind pursed lips. The fingers of one hand dug into Gabe Triggs's jaw while the others gripped the back of the man's skull. Blockycurvature: Fic: Again Tonight (True Blood) Title: Again TonightAuthor: OriFandom: True BloodCharacters: Godric, EricRating: PGWord Count: 1,116Summary/Warnings: Godric is lost in thought tonight. 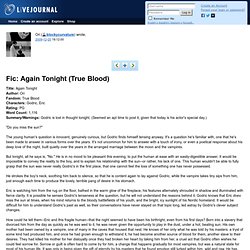 (Seemed an apt time to post it, given that today is his actor's special day.) "Do you miss the sun? " The young human's question is innocent, genuinely curious, but Godric finds himself tensing anyway. It's a question he's familiar with, one that he's been made to answer in various forms over the years.

It's not uncommon for him to answer with a touch of irony, or even a poetical response about his deep love of the night, built quietly over the years in the arranged marriage between the moon and the vampires. But tonight, all he says is, "No. " Havocs_roman: I blame Halloween, OK? That's when I started writing this, at least. 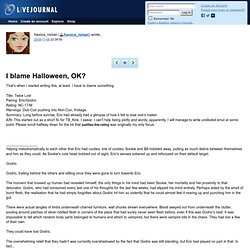 I have to blame something. Godriceric: Untitled ficlet 2. Gruochrua - Of Things Past. Summary: Shortly after starting his new life, Eric learns something about his maker’s past, and begins to discover the nature of their future. It was nearing mid-winter and the night air was bitterly cold, but the chill did not touch them. They were chasing each other through the deep woods towards the river, full and vibrant with fresh blood. Eric loved to run between the trees and watch how swiftly they passed, loved how strong and fast he was, how brave and fearless and godlike.

It was in these moments that his lingering doubts faded, that he knew he had made the right choice the night his maker had come to him on his deathbed. He wished to spend every night like this, flying over the snow beneath the pale moon. Eric could hear the rushing of the river ahead and sprinted towards it. Eric walked up behind him. “There is a woman in the water,” Godric said quietly.

Eric squatted beside him and looked where he gestured, and spotted the body of a woman. His maker said nothing. “Then what? Gruochrua - Title: Cannibal Signs Author: gruochrua Fandom: True Blood Rating: PG-13, for some violence, sexuality Characters: Godric/Eric Length: ~6,300 Summary: Eric wants what he wants and Godric has doubts. It was the midnight hours of Moon’s day, day for creatures of the night, shades and wraiths and the undead rising.

He turned his face up and gazed for a time at the pale orb glowing through the branches overhead. The moon hung low and round that night, its soft light reaching out and pushing the darkness to the velvety edges of the sky. A chorus of howls rose somewhere in the distance, and he was reminded of the game he was supposed to be playing. He reached the edge of the woods beside the open road and crouched down in the shadows, listening carefully and sniffing at the air. He hummed quietly to himself as he lay there in the damp rut, patiently waiting. I Bloom at Night - Watching the Clock. I'm really looking forward to the start of Season 3 on Sunday night, how about you? New Godric/Eric slash fiction under the cut ... Title: Watching the Clock Author: septemberoses Fandom: True Blood Rating: R Characters: Eric/Godric Word Count: 1850 Summary: Halfway between porn and fluff.

I guess it's ... puff? Godric was engrossed in the cookbook propped on the marble countertop, an array of pans and utensils spread all over the kitchen island in front of him. He failed to notice as Eric strolled in, glanced at the food-related mess, and then moved stealthily until he was directly behind the bent form of his still-oblivious maker. Godric jumped. Blockycurvature: Fic: Again Tonight (True Blood) Title: Again TonightAuthor: OriFandom: True BloodCharacters: Godric, EricRating: PGWord Count: 1,116Summary/Warnings: Godric is lost in thought tonight. (Seemed an apt time to post it, given that today is his actor's special day.) "Do you miss the sun? " The young human's question is innocent, genuinely curious, but Godric finds himself tensing anyway.

It's a question he's familiar with, one that he's been made to answer in various forms over the years. It's not uncommon for him to answer with a touch of irony, or even a poetical response about his deep love of the night, built quietly over the years in the arranged marriage between the moon and the vampires. Blockycurvature: Fic: My Own Private Valhalla (True Blood) Title: My Own Private ValhallaAuthor: OriFandom: True BloodCharacters: Eric/GodricRating: RWord Count: 1,940Summary: Nights like these are few and far between.Notes/Warnings: Written to fill a holiday gift request by septemberoses. Hopefully she can forgive that it is a little more fluff than kink. :) Eric had never told anyone before, but he had actually seen a valkyrie.

It had been a cold, misty night, deep in the heart of their enemy's territory; they were at war with a tribe that controlled a particular strait of water territory, one that was excellent for fishing. The control of the strait hadn't been the real issue, and was far enough from Eric's tribe that they might never have clashed over it, except that the waters where his people usually fished were becoming more and more barren, forcing them to venture further out, and every time they tried to pass through the strait, this damn tribe attacked them.

They do have wings, he'd thought to himself. Silverharmony: Fanfic: Two Sides (Godric & Eric) My other Godric/Eric fics: In Understanding | Sanctuary | What You Love Most | Beyond All Telling (Note: This fic was formerly named "Two Sides". 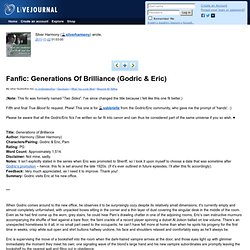 I've since changed the title because I felt like this one fit better.) Lessons in Being Inhuman: Two Vignettes - Lenore - True Blood. Tell Him Goodbye - starsystems - True Blood. He tries to send the message to him with everything he's got. 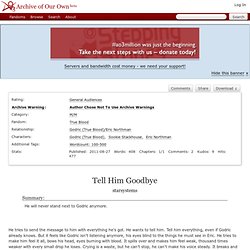 He wants to tell him. Tell him everything, even if Godric already knows. But it feels like Godric isn't listening anymore, his eyes blind to the things he must see in Eric. He tries to make him feel it all, bows his head, eyes burning with blood. It spills over and makes him feel weak, thousand times weaker with every small drop he loses.

Please, please, please is all that is going through his head, dropping out of his mouth, running down his cheeks with his blood. Godriceric: Untitled ficlet. The Perils of Instruction - sabrina_il (marina) - True Blood. "You always stay away from the children," Godric's voice comes from behind Eric's back. 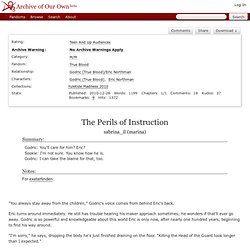 If you log in you can store your preference and never be asked again. One Sin More - EffingEden - True Blood. Smoke curls from their skin, the first taste of agony rolling through his mind though he has know worse – though knowing his Viking suffers in kind makes it more than just a physical ache. Godriceric: Untitled ficlet 2. Remorse of the tv junkie - TB fic: If You See a Shadow. Trueblood_slash: Fic: Five Ways Godric Didn't Burn. Godriceric: Ficlets: Evolution of a Warrior. Fandom didn't make you a bitch (you were born one) - Fic: True Blood (Godric/Eric) It was bound to happen eventually and bbs, I am so happy it finally has. Fire of Spring - Fic: Kenning (True Blood; Godric, Eric) Kellyj63081. Title: Make My Heart a Better Place; Part 4 of ??? Rating: RWarnings: Slash, Some Fluff, May Get a Little Dark Eventually (my work sometimes does), and the fact that I'm going to take quite a few liberties with Godric and Eric's respective histories.