Love at Second Sight - Chapter 1 - Chesra - K (Anime) Chapter Text Slow down, we've got time left to be lazy All the kids are bloom from babies into flowers in our eyes We've got fifty good years left to spend out in the garden I don't care to beg your pardon, we should live until we die ( -The Gambler | fun.) 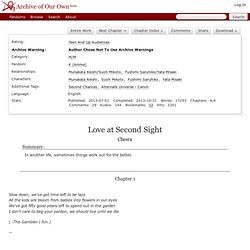 He meets Munakata again in a bar. It is oddly fitting; in the dim light Mikoto would have thought he was just someone else with a passing resemblance. He is sitting upright on the bar stool, looking unruffled by the loud noises. Mikoto slides in the seat beside him and orders his usual drink. "Suoh Mikoto," he intones coolly, when the bartender leaves. Munakata looks the same. "Munakata," he greets back. "Fancy meeting you here," Munakata murmurs, and the lilt in his voice tells Mikoto that Munakata has drunk enough to let his guard down. Chaise_lounge: this is a secret nobody knows. Title: this is a secret nobody knowsFandom: Project KCharacters: Fushimi/Yata This is fire, and it is the color of blood. 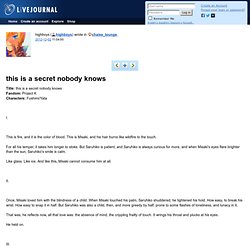 This is Misaki, and his hair burns like wildfire to the touch. For all his temper, it takes him longer to stoke. But Saruhiko is patient, and Saruhiko is always curious for more, and when Misaki's eyes flare brighter than the sun, Saruhiko's smile is calm. Like glass. Gestalt, a k fanfic. Sugarplum - Ataraxia - K (Anime. Bitter and dumb, you're my sugarplum. 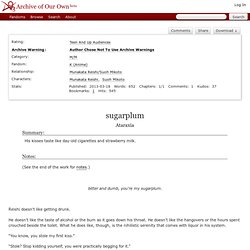 Reishi doesn't like getting drunk. He doesn't like the taste of alcohol or the burn as it goes down his throat. He doesn't like the hangovers or the hours spent crouched beside the toilet. What he does like, though, is the nihilistic serenity that comes with liquor in his system. “You know, you stole my first kiss.” Gestalt - Ataraxia - K (Anime) Mikoto likes to contradict himself. 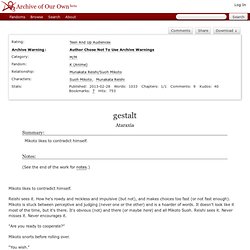 Reishi sees it. How he's rowdy and reckless and impulsive (but not), and makes choices too fast (or not fast enough). Mikoto is stuck between perceptive and judging (never one or the other) and is a hoarder of words. Possessed by light, a k fanfic. Notes: Written in one sitting on a stray image of rituals in an alleyway—which isn't nearly as cool or sexy as it sounds, and in fact I'm pretty sure there are no pairings in this at all unless you squint. 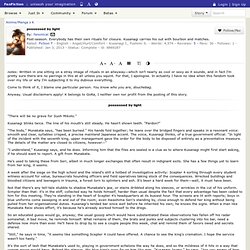 For that, I apologise. In actuality I have no idea when this fandom took over my life or why I'm subjecting it to my dubious everything. Come to think of it, I blame one particular person. You know who you are, douchebag. Anyway. Dating is Still a Battlefield - Chapter 1 - Chesra - K (Anime) Chapter Text "You know you don't actually have to destroy city property to get my attention," Munakata tells Suoh Mikoto after the nth time they have a standoff in the middle of a field of broken glass shards and burned doors. 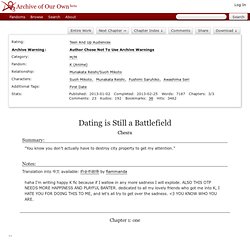 It had been amusing the first time, to be called on to stop the rampaging Red King and his band of delinquents, but as time passed by the novelty wore off, and each HOMRA-related warning sign was met with a drawn out sigh. Suoh Mikoto smirks. Flames Don't Burn in Blue - MappingtheSoul - K (Anime) A year later when there really is no blood, no bone, no ash, Munakata Reishi steps down from his position as the Blue King. 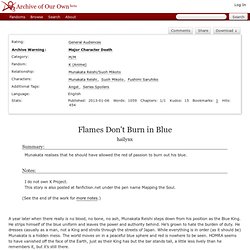 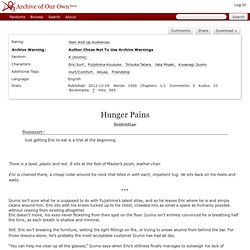 It sits at the foot of Master’s plush, leather chair. Eric is chained there, a cheap collar around his neck that bites in with each, impatient tug. He sits back on his heels and waits. Izumo isn’t sure what he is supposed to do with Fujishima’s latest stray, and so he leaves Eric where he is and simply cleans around him. Eric sits with his knees tucked up to his chest, crowded into as small a space as humanly possible without ceasing from existing altogether.Eric doesn’t move, his eyes never flickering from their spot on the floor. Still. “You can help me clear up all the glasses,” Izumo says when Eric’s stillness finally manages to outweigh his lack of destructiveness. Eric hasn’t gone far, lingering in the doorway to the kitchen as through hypnotised. Izumo has prepared an array of dishes there, their aromas decadently sweetening the air. And Eric, Eric is hungrily eyeing the scraps on the side as though they are the world’s greatest delicacy.

Disenchanted - Fic: A touch through the years. Pairing/characters: SaruMi with a Homra cameoWord-count: 2.533Genre: fluff, angst, more fluff, more angst, and fluff again Summary: There’s a reason why Misaki wears a beanie, but no one knows about it.Notes: I had this idea bubbling in my head for a while after reading this (there’s a reference to one of these lines around the end actually I have a big theory about these lines but I’ll keep it to myself because I don’t trust my line of thought orz), so I decided to finally write it :> I received some prompts too, but I had to write this one before I get too lazy. 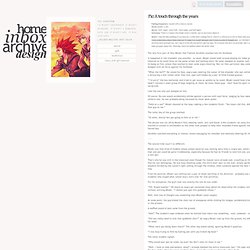 To everyone who sent me prompts, don’t worry, I’ll write it! I hope you guys enjoy this. (Warning: there are spoilers about the series’ end). The very first part of Yata Misaki that Fushimi Saruhiko touched was his forehead. It happened in the stupidest way possible – as usual, Misaki would walk around playing his video games, his head lowered so he could focus on the game screen and nothing more. “What the hell?! Of course. Hero, a k fanfic.

A/N: I just word vomitted this in like five minutes because I watched episode 10 and got really emotional. 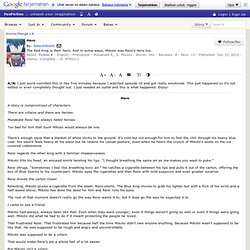 This just happened so it's not edited or even completely thought out. I just needed an outlet and this is what happened. Take Them Off, a k fanfic. Take Them Off Suoh Mikoto x Munakata Reisi PG-13 (sexual implications) OoO A breathy warmth along his skin lifted Mikoto from the fetters of unconsciousness. Slightly. "Suoh... " Several hours earlier, both kings had shared a nostalgic celebration that crept into more personal dealings and concluded with much needed emotional contact and physical exploration. You'll find your way back down (and i'll keep the area clear) - copperiisulfate - K (Anime) I) He's smoking behind the bar when Izumo finds him, plucks the cigarette from his fingers and takes a drag, exhales slow and then cuts right to the chase with, "So, your sword's in crap condition. " Mikoto grumbles, something under his breath along the lines of get your own damn cigarettes, because the Red King certainly does not whine but it's a very near thing.

They used to do this when they were kids, couldnt scrap up much so ended up sharing everything from clothes to beds to bad habits, splitting cigarettes and rent and body heat. Now, Izumo almost finds it poetic that Mikoto's got fire as his element. If nothing else, at least there's no fear anymore of either of them catching chills in December nights much like these. No Blood, No Bone, No Ash - furiosity - K (Anime) Reisi stepped into the disused basement utility room that Suoh's underlings had taken to calling "the HQ" and cleared his throat.

Far from a respectable base of operations, the place was just a couple of pilfered sofas jammed in between piping and piles of discarded cardboard boxes that even a recycling facility wouldn't want, they stank so badly of mildew. "Oh, if it isn't the Student Council again," Kusanagi Izumo commented from next to Suoh, on the sofa underneath the only window in the place. "What terrible wrong are we supposed to have committed this time, Mr President? " Control the Unknown - furiosity - K (Anime) /K Project/#1315595. /K Project/#1331381. /K Project/#1334589. /K Project/#1353556. /K Project/#1357470. /K Project/#1375036. Take Them Off-MikotoRei by ~Mel-Meiko-Mei-Ling on deviantART. All the colours of the rainbow fell in my eyes - copperiisulfate - K (Anime) He dreams of baseball diamonds. They weave in and out of each other, a rough collage of Yata scratching up the pavement by the bar, Kusanagi's scowl and Totsuka's laughter, of Anna's hand in his own and her eyes on the marbles, swirling and swirling in circles on the rosewood.

They bleed seamlessly into smoke rising high into the sky, all that was far too good to last, of Munakata's eyes falling shut before him as his saber runs clean through Mikoto’s heart-- He jerks awake, rubs sleep away from his face along with the cold water because, of course, the Blue King has found his way inside his cell once again. “Really, Munakata" he mutters, "No need to get so extravagant on my account. A simple good morning would have sufficed.” His vision adjusts to the light and his eyes narrow at the tray before him. Friendly Game - fencer_x - K Project. Thinnest Edge - furiosity - K (Anime) Accomplice/Gauche - furiosity - K (Anime)