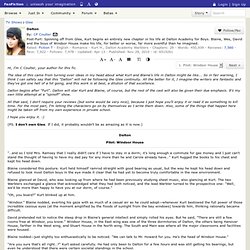 The idea of this came from turning over ideas in my head about what Kurt and Blaine's life in Dalton might be like... So in fair warning, I think I can safely say that this "Dalton" will not be following the Glee continuity. All the better for it, I imagine-the writers are fantastic and they've got one hell of a hit going, and this work is at best, a dilution of that excellence. Dalton begins after "Furt". Dalton will star Kurt and Blaine, of course, but the rest of the cast will also be given their due emphasis. All that said, I don't require your reviews (but some would be very nice), because I just hope you'll enjoy it or read it as something to kill time. I hope you enjoy it. :) (PS. It's fluffy too! Title: EnvelopmentAuthor: colferPairing: Glee; Kurt/BlaineRating: NC-17Word Count: 5,504Disclaimer: Not mine, don't sue.Spoilers: Through 3x08.Summary: The goings-on that take place in the back seat of Blaine's car on a Saturday night under a streetlamp. 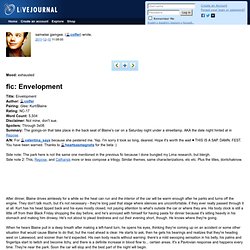 AKA the date night hinted at in Repose. A/N: For valentina_says because she pestered me. Yep. Heartsasmagnets for the beta :) Side note: The park here is not the same one mentioned in the previous fic because I done bungled my Lima research, but blergh. After dinner, Blaine drives aimlessly for a while so the heat can run and the interior of the car will be warm enough after he parks and turns off the engine. When he hears Blaine pull in a deep breath after making a left-hand turn, he opens his eyes, thinking they're coming up on an accident or some other situation that would cause Blaine to do that, but the road ahead is clear.

Blaine catches his eye and smiles a little, only one corner of his mouth curling up. "You asked me! " "Uh-huh. Hogwarts AU. Sequel. Little Numbers. Title: Little Numbers (11/?) 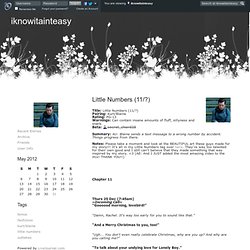 Pairing: Kurt/BlaineRating: PG-13 Warnings: Can contain insane amounts of fluff, sillyness and snark. Beta: secret_chord25 Summary: AU: Blaine sends a text message to a wrong number by accident. Things progress from there. Notes: Please take a moment and look at the BEAUTIFUL art these guys made for my story!!! Chapter 11 Thurs 25 Dec (7:45am)~Incoming Call~“Goooood morning, lovebird!” “Damn, Rachel. “And a Merry Christmas to you, too!” “Ugh... “To talk about your undying love for Lonely Boy.” “...What??” “The text you sent me last night. . “...Crap. “No. Abusive!klaine. I have yet to read this. Once in a Blue Moon Chapter 1: Two Shall Meet, a glee fanfic. Hello everyone! 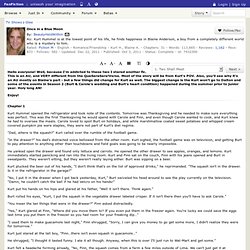 Well, because I'm addicted to these two I stared another fic. This is an AU, and VERY different from the QueSeraSera! Verse. Most of the story will be from Kurt's POV. Also, you'll see why it's an AU mostly on Blaine's part - but a few things did change for Kurt as well. Enjoy! Chapter 1 Kurt Hummel opened the refrigerator and took note of the contents. "Dad, where is the squash? " "In the drawer? " He yanked open the drawer and found only lettuce and carrots. Kurt plucked the beer out of his hands, "I don't think that's on the list of approved drinks," he reprimanded.

"No, I put it in the drawer when I got back yesterday, Kurt," Burt swiveled his head around to see the play currently on the television. Kurt put his hands on his hips and glared at his father, "Well it isn't there. Burt rolled his eyes, "Kurt, I put the squash in the vegetable drawer labeled crisper. "You mean the tan things that were in the drawer? " Come What May Chapter 1, a glee fanfic. Come What May Kurt Hummel couldn't have been happier. 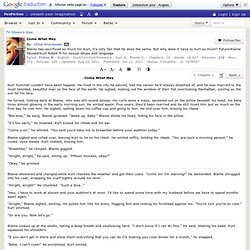 He lived in the city he adored, had the career he'd always dreamed of, and he was married to the most talented, beautiful man on the face of the earth. He sighed, looking out the window of their flat overlooking Manhattan, smiling as the sun hit his face. He turned, looking back at Blaine, who was still sound asleep. His curls were a mess, sprawled out on the pillow beneath his head, his bare torso almost glowing in the early morning sun.

"Bla-aine," he sang. "It's too early," he moaned. OH MY GOD ALL THE CREYS. Summary: Kurt begins his junior year at McKinley, fully prepared for something better than the torment he has suffered as an underclassman. 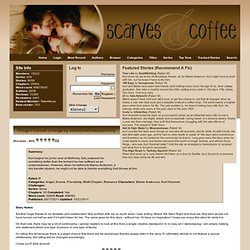 However, when he befriends Blaine Anderson, a shy transfer student, he might not be able to handle everything God throws at him. Rated: RCategories:Angst, Drama, Friendship, Multi-Chapter, RomanceCharacters: Blaine Anderson, Kurt HummelChallenges:Series: NoneChapters: 20 Completed: Yes Word count: 54669 Read: 496082 Published: 09/17/2011 Updated: 10/21/2011 Story Notes: Another huge thanks to my fantastic plot collaborator! On that note, there may be a bit of controversy. I'm rating this M because there is a slight chance that there will be sex/sexual themes waaay later in the story.