Noblesse: I did not permit you to die by Sawitry on deviantART. Touch, a manhwa/korean comics/만화 fanfic. Summary: Tao invading Takeo's space because he felt like it wasn't anything new. 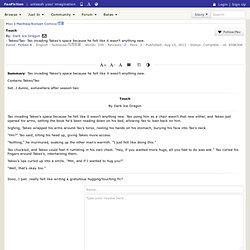 Contains Takeo/Tao Set…I dunno, somewhere after season two Touch By Dark Ice Dragon Tao invading Takeo's space because he felt like it wasn't anything new. Sighing, Takeo wrapped his arms around Tao's torso, resting his hands on his stomach, burying his face into Tao's neck. "Hm? " "Nothing," he murmured, soaking up the other man's warmth. Tao chuckled, and Takeo could feel it rumbling in his own chest. Re-evaluate, a manhwa/korean comics/만화 fanfic. Summary: Rai smiled down at the filled teacup Frankenstein had just placed in front of him, amusement winding through their link. 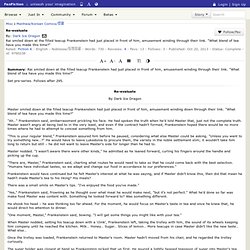 "What blend of tea have you made this time? " Set pre-series. Follows after 295. Re-evaluate By Dark Ice Dragon Master smiled down at the filled teacup Frankenstein had just placed in front of him, amusement winding down through their link. "Ah…" Frankenstein said, embarrassment prickling his face. "This is your regular blend," Frankenstein assured him before he paused, considering what else Master could be asking. 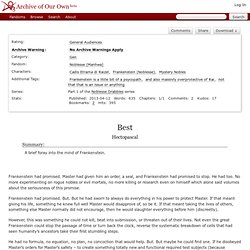 Master had given him an order, a seal, and Frankenstein had promised to stop. He had too. No more experimenting on rogue nobles or evil mortals, no more killing or research even on himself which alone said volumes about the seriousness of this promise. Noblesse: May I borrow your hat, Sir by ~camellia029 on deviantART. Esp_dragon. Fandom: NoblesseSummary: Rai was staring out the window.Rating: GContains: Nothing. 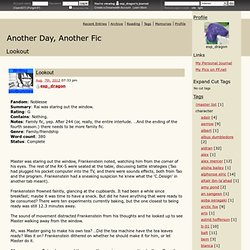 Notes: Family fic, yep. After 244 (or, really, the entire interlude. …And the ending of the fourth season.) there needs to be more family fic. Genre: Family/friendshipWord count: 380Status: Complete Master was staring out the window, Frankenstein noted, watching him from the corner of his eyes. Frankenstein frowned faintly, glancing at the cupboards. Stay With Me, a manhwa/korean comics/만화 fanfic. Disclaimer: I own nothing, other than way too much angst. 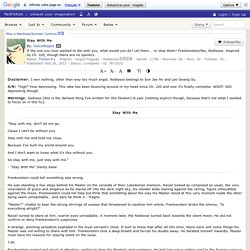 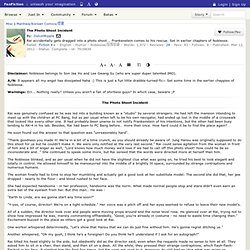 A/N: It appears all my angst has dissipated haha :) This is just a fun little drabble-turned-fic~ Set some time in the earlier chappies of Noblesse. Warnings: Err... Nothing really? Unless you aren't a fan of shirtless guys? In which case, beware ;P The Photo Shoot Incident. Dear Gejutel, Sincerely, Frankenstein, a manhwa/korean comics/만화 fanfic. Part of the Job, a manhwa/korean comics/만화 fanfic. Summary: M-21's just doing his job.

Fic inspired by DulcetRipple. :DD Set after chapter 200. Part of the Job. Impulsive, a manhwa/korean comics/만화 fanfic. A/N: Please tell me I'm not the only one who could see the possibility of this happening. 8D Disclaimer: Purely for kicks, no harm meant, no profit made. 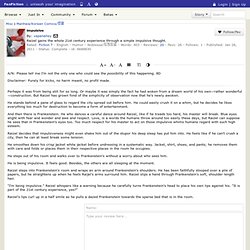 Perhaps it was from being still for so long. Or maybe it was simply the fact he had woken from a dream world of his own—rather wonderful—construction. But Raizel has grown fond of the simplicity of observation now that he's newly awoken. He stands behind a pane of glass to regard the city spread out before him. And then there is Frankenstein.

Raizel decides that impulsiveness might even shake him out of the stupor his deep sleep has put him into. The Wrong Approach, a manhwa/korean comics/만화 fanfic. Summary: Dear Diary… Very vague spoilers. 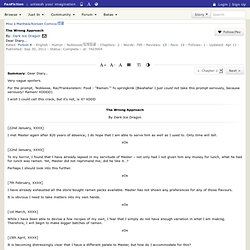 For the prompt, 'Noblesse, Rai/Frankenstein: Food - "Ramen. "' fo springkink (Bwahaha! I just could not take this prompt seriously, because seriously! Ramen! XDDDD) I wish I could call this crack, but it's not, is it? The Wrong Approach By Dark Ice Dragon [22nd January, XXXX] Eternity and a Day, a manhwa/korean comics/만화 fanfic. Disclaimer: Noblesse belongs to Son Jae Ho and Lee Gwang Su. 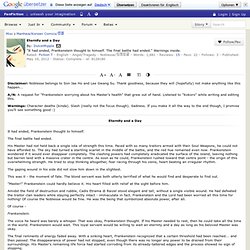 Thank goodness, because they will (hopefully) not make anything like this happen... A/N: A request for "Frankenstein worrying about his Master's health" that grew out of hand. Listened to "Kokoro" while writing and editing this. Inappropriate, a manhwa/korean comics/만화 fanfic. Summary: This crush was completely inappropriate for a noble like himself. Contains Regis/M-21. Set after 154. Written for the prompt, 'Noblesse, M-21/Regis: attraction - This crush is completely inappropriate for a noble like himself' for springkink. When I label pairings, the first name is the narrative character, in case you were wondering. ^ ^ Inappropriate By Dark Ice Dragon Regis found his gaze drifting towards M-21 for the third time that night; frowning at his continued lapse in control, Regis dragged his attention back to his dinner. Seduction?, a manhwa/korean comics/만화 fanfic.

Seduction? No flames, please. If you don't like to read slash and lemon, I would ask you to promptly close this window. Disclamer: Noblesse belongs to Son Jae Ho (author) and Lee Gwang Su (artist). No offence or disrespect intended; I'm just having fun. (Yes, this is fun for me.) Enjoy! Age, a manhwa/korean comics/만화 fanfic. This short piece of story is somewhere between chapter 164 and the end of chapter 165. I'm no native speaker and this is my first fanfiction in English – so I'm still learning, like how to put words into the right order or punctuation. Thanks to Dark Ice Dragon there shouldn't be any mistakes. If somebody does find a mistake it's totally my fault! Thanks again for your hard work! Seira was cooking, Takeo and Tao were on some errands, Rai was sipping on his ever present tea and Frankenstein disappeared into his laboratory doing … whatever. That only left M-21. He cocked his head to look into the hallway and strained his ears if he could hear something indicating where the physically older male was.

"Balcony," said a soft voice and Regis' head snapped back to Rai who was still drinking tea on the couch. On the balcony Rai had been right. "What are you doing? " "Trying to figure out how much older you are than me," was the short but impudent answer. The Yukata Incident, a manhwa/korean comics/만화 fanfic. The Yukata Incident Hello there. No flames, please. If you don't like slash and lemon, maybe you shouldn't be here... Disclamer: Noblesse belongs to Son Jae Ho (author) and Lee Gwang Su (artist). Just having some fun; no offence or disrespect intended. Enjoy! I shiver when I hear your name Think about you but it's not the same.