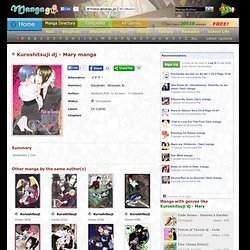 There seems to be unresolved issues. Chic (fuwa Shinri)Vol.1 Ch.1(end)views: 90kPairing: Sasuke x NarutoThis is a short little copybook with one story about Naruto and Sasuke. In this AU, Naruto is about five years older than Sasuke, and they're in a relationship. Touch - Hellion - Kuroshitsuji. Ciel sits on the edge of his bed after his evening bath, hands folded in his lap and skin flushed pink with warmth. 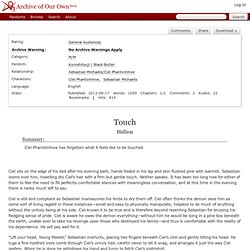 Sebastian looms over him, towelling dry Ciel’s hair with a firm but gentle touch. Neither speaks. It has been too long now for either of them to feel the need to fill perfectly comfortable silences with meaningless conversation, and at this time in the evening there is rarely much left to say. Ciel is still and compliant as Sebastian manoeuvres his limbs to dry them off. Ciel often thinks the demon sees him as some sort of living ragdoll in these instances—small and easy to physically manipulate; helpless to do much of anything without the unholy being at his side. “Lift your head, Young Master,” Sebastian instructs, placing two fingers beneath Ciel’s chin and gently tilting his head. Ciel almost frowns at the loss of contact. 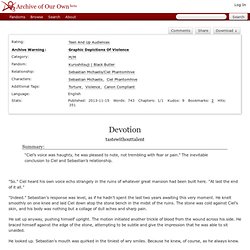 " Ciel heard his own voice echo strangely in the ruins of whatever great mansion had been built here. "At last the end of it all. " "Indeed. " FanFiction - Comodo IceDragon. Beneath the Surface, a kuroshitsuji fanfic. Beneath the Surface On walls crisp silver in the moonlight stretched the shadow of Earl Ciel Phantomhive, nightshirt child-white to compliment ghostly protruding pale legs. 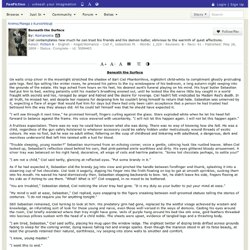 Red lips wilting like winter roses, he pressed his palms to the icy windowpane of his bedroom, a long autumn night seeping into the grounds of the estate. First Taste - Chicary - Kuroshitsuji. Spider Web, a kuroshitsuji fanfic. Disclaimer: I don't own anything, really.

It's sorta pathetic. Author's Note: The last episode gave me a whole ton of ideas. Here's a nice mesh of them. X3 Warnings: Spoilers through the end of the anime series. Spider Web. Playing the Game, a kuroshitsuji fanfic. Playing the Game Ciel Phantomhive was a child when their contract began. 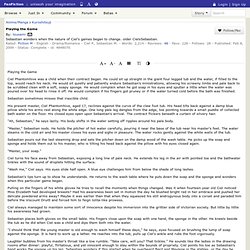 He could sit up straight in the giant four legged tub and the water, if filled to the top, would reach his neck. He would sit quietly and patiently endure Sebastian's ministrations, allowing his scrawny limbs and pale back to be scrubbed clean with a soft, soapy sponge. He would complain when he got soap in his eyes and sputter a little when the water was poured over his head to rinse it off.

He would complain if his fingers got pruney or if the water turned cold before the bath was finished. Sebastian sometimes misses that irascible child. His present master, Ciel Phantomhive, aged 17, reclines against the curve of the claw foot tub. Desiderata, a kuroshitsuji fanfic. Desiderata "With all its sham, drudgery, and broken dreams,it is still a beautiful world. 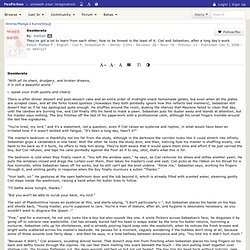 " i. speak your truth quietly and clearly There is after-dinner dessert and post-dessert cake and an extra order of midnight-snack homemade gelato, but even when all the plates are scraped clean, and all the forks licked spotless (nowadays they both pointedly ignore how this reflects bad manners), Sebastian still doesn't feel as if he has apologized quite enough. He shuffles around the room, dusting the shelves that Maylene failed to clean that day, until the candles are burning low, and Ciel finally lifts his hand to mask a yawn.

Walk On Water Or Drown, a kuroshitsuji fanfic. A/N: this is the first writing in a long while, so bear with me. the fiction is loosely based on the affects of sound, and I took the first line and the title from the Mayday Parade song that shares the same title. 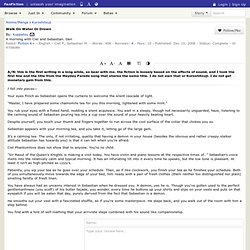 I do not own that or Kuroshitsuji. I do not get monetary gain from this. I fell into pieces— Your eyes flinch as Sebastian opens the curtains to welcome the silent cascade of light. "Master, I have prepared some chamomile tea for you this morning, lightened with some mint. " A Better One, a kuroshitsuji fanfic. Ciel Phantomhive, through the eyes of Undertaker. 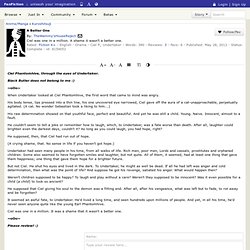 Black Butler does not belong to me :) ~oOo~ When Undertaker looked at Ciel Phantomhive, the first word that came to mind was angry. Almost* there. - "never close enough" Title: "Never Close Enough"Series: Kuroshitsuji IIGenre: AngstCharacters: Alois Trancy, Ciel Phantomhive and Claude FaustusRating: PG-13Word Count: 1,500Summary: Just a little bit closer and Alois would finally be able to reach them.Warning: Spoilers for episode seven of Kuroshitsuji II Author's Notes: I've had this theme rolling around in my head for a while and only now have I actually seriously set out to complete it. = u= Another depressing, unrequited love fanfiction and my interpretation of the episode that keeps getting tears into my eyes every time I watch it. 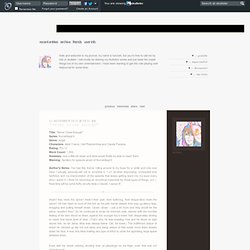 I think I'm becoming an emotional masochist for these types of things. orz ;;; Next time will be some fluffy, smutty Alois x Claude, I swear it! A Contract Called Desire, a kuroshitsuji fanfic. Author's Note: So this new season of Kuroshitsuji II has managed to do the unthinkable and necromancy me out of my writer's block grave in honor of Claude and Alois.

I simply adore this pair already so I had to write something~ I have to admit though haven't written any fanfics in years so I apologize if I'm rusty or my writing style is awkward. Critiques, even flames –as long as they are well articulated– are welcomed. Petit Rouge, a kuroshitsuji fanfic. Author's Note: First installment in a five chapter story. As always there might be mistakes since I cannot write anything during the day when my brain actually works. I own nothing except what's in my head. I. Ouïe What big ears you have. Monotonous. Any and all hope Alois had was now put in the being who was beckoning him. Almost* there. - "feelings are like blood" Almost* there. - "embers" Title: "Embers"Series: KuroshitsujiGenre: General, Fluff-ish, Smut-ishPairing: Claude x AloisRating: NC-17Word Count: 1,000Summary: The lust in Claude's eyes was better than any fire he had ever seen.Warning: Uh, comparing foreplay/sex with Claude to fire?

Arthur's Notes: This all came from a cold evening in January where I was sitting in front of my fireplace and staring into it intently for a few minutes, all while thinking of comparing it to smut. XD; Good story, eh? Almost* there. - "whispers" Almost* there. - "good times for a change" Reach - kitana - Kuroshitsuji. All anyone knows of Alois Trancy is that he is bold. If he were to reveal his true nature, they would know he is jaded, broken, and his brazenness stems from it. They would know that he has tempted fate all the way to this brink of his own destruction and is intelligent enough to know this but foolish enough to not care. This morning, Alois feels in the grip of that same such brazen foolishness and, since he is already given to flights of fancy, he indulges himself. Claude comes to him with magnificent tea, blueberry scones, and his attire for the day. That Butler, Sick - DisgruntledMinion - Kuroshitsuji.

It all started out as an innocent joke. His Butler, Observing - deadcellredux - Kuroshitsuji. There is something about the way his Master leans back into the leather of his chair, crosses his legs and leans his chin into his fist just so as he turns the pages of his newspaper. Bittersweet - Kantayra - Kuroshitsuji. This work could have adult content. If you proceed you have agreed that you are willing to see such content. If you accept cookies from our site and you choose "Proceed", you will not be asked again during this session (that is, until you close your browser). Atop a Manor Wall, I Saw… - Kantayra - Kuroshitsuji. A small, grey-black cat sat atop the stone wall and gazed at the vast lawns of the estate before it with disdain.

And then, just as the cat looked about to turn back and slink away once more, it was joined on its perch by a pitch-black raven. The raven looked at the cat, and the cat scowled at the raven. And then, slowly, the raven leaned in and rubbed its cheek against the kitten’s downy-soft fur, its eyes shut in what almost looked like a blissful smile. A Demon's Bliss - Kantayra - Kuroshitsuji. The sexiest thing about his master was that there was never even the thought that they’d have sex.

The Keeping of a Perfectly Imperfect Soul - Kantayra - Kuroshitsuji.