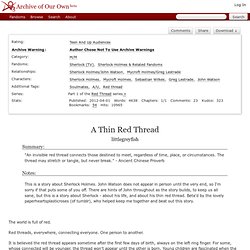 Red threads, everywhere, connecting everyone. One person to another. It is believed the red thread appears sometime after the first few days of birth, always on the left ring finger. For some, whose connected will be younger, the thread won't appear until the other is born. Young children are fascinated when the thread is explained to them, and many spend free afternoons following their threads as far as they can before they tire, or their mother calls them to dinner. When people are fortunate enough to meet their connected, the connection is never challenged. Some people spend all of their time following their threads searching for who they are connected to. However, waiting can have consequences. Sometimes, if one is very lucky, a new thread will appear in the place of the black one. The research behind these threads is extensive, but science can't seem to find any answers. 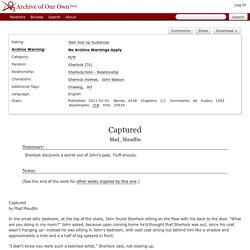 "What are you doing in my room? " John asked, because upon coming home he'd thought that Sherlock was out, since his coat wasn't hanging up--instead he was sitting in John's bedroom, with said coat arcing out behind him like a shadow and approximately a mile and a a half of leg splayed in front. "I didn't know you were such a talented artist," Sherlock said, not looking up. John's heart did a funny thing in his chest, and he stepped over Sherlock's spreading coattails to confirm his suspicion: Sherlock had one of his old sketchbooks in his lap, and was flipping idly through it.

"I should've seen it," Sherlock grumbled, because of course the surprise wasn't that John used to draw, it was that Sherlock hadn't figured it out from the first. "What's the case? " "Oh. "Aha? " John pulled his hand away and snatched back the sketchbook. The Best Picture of the Human Soul - SwissMiss - Sherlock (TV), Sherlock Holmes & Related Fandoms. John Watson once knew a woman who had thirteen hearts on the inside of her forearm. 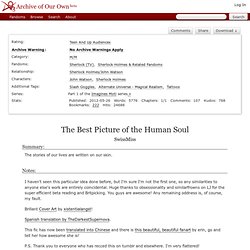 They were all pink, and one even had little lacy wings coming out of it. Hearts didn't always mean love, but on her, they obviously did. She was an obvious person, with blue eyeshadow and pouty lips and a gold heart on a chain around her neck, as if the rosy blooms on her arm weren't enough. One of them was for him, she'd told John, excited, the morning it appeared. They'd only met the night before, at one of those insane after-finals parties in med school. Too Much To Hold - Chapter 1 - Sparkle_Free - Sherlock (TV. Chapter Text John had gotten used to waking up in a war zone. 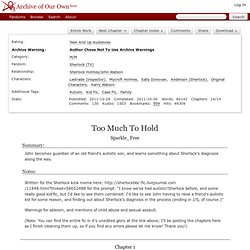 Literally, of course, and figuratively now that he’d settled into his life with Sherlock. And the worst days were when he woke up to nothing at all. He jerked out of bed when the silence managed to trickle fully into his sleep-adled mind. There were no sounds coming from the sitting room, and John crept down the stairs and peered around the room. To Light Another's Path - Chapter 1 - BeautifulFiction - Sherlock (TV. In Search Of A Word: A Symphony Of First Times - queenfanfiction - Sherlock (TV.

Music is love in search of a word. 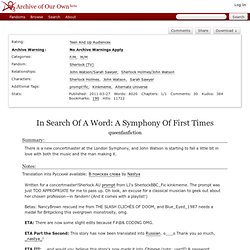 —Sidonie Gabrielle The first time John Watson ever laid eyes on Sherlock Holmes, it was all Sarah's fault. Technically, it was the fault of the rich old lady who'd nearly died in the waiting room were it not for John resuscitating her and performing her much-needed operation himself. Said old lady was so grateful for the care she'd received that she donated a dozen tickets to the London Symphony for the doctors on call to take for themselves as a reward. John appreciated the gesture, but he really wasn't into classical music. The Heart On Your Sleeve - flawedamythyst - Sherlock (TV), Sherlock Holmes & Related Fandoms.

At first he thought it was a rash. 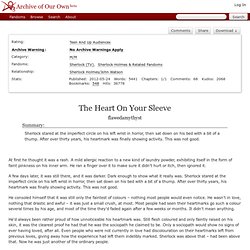 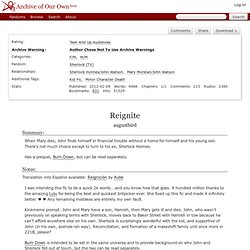 Sherlock doesn’t seem to know what to say. Fairytale of London - thirdbird - Sherlock (TV. ~ London, 24 December, 2004 ~ He should have known better, John thinks, than to make plans to meet his sister in a pub on Christmas Eve. 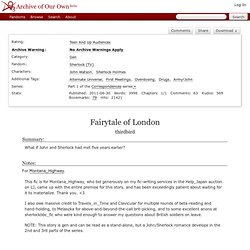 There’s been no sign of Harry all evening, and she’s not answering her phone. Met some more interesting friends on the way, no doubt. Stopped for a drink or six, stood him up, forgot, passed out. Two Points - Speranza - Sherlock (TV. Embarrassingly, Sherlock couldn't process fast enough to understand what was happening. 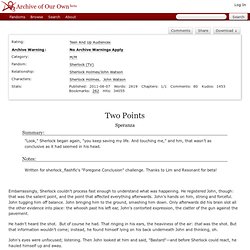 He registered John, though: that was the salient point, and the point that affected everything afterwards. John's hands on him, strong and forceful. John tugging him off balance. John bringing him to the ground, smashing him down. 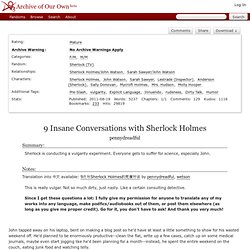 He'd planned to be enormously productive--clean the flat, write up a few cases, catch up on some medical journals, maybe even start jogging like he'd been planning for a month--instead, he spent the entire weekend on the couch, eating junk food and watching telly. Sherlock breezed into the room and John ignored him, as he had come to find it was altogether better to do when Sherlock entered a room. John had been watching Dog Whisperer and was intrigued by Cesar's idea of domination through non-reaction to attention seeking behavior. Sink Like a Stone - pennydreadful - Sherlock (TV. John stepped into the flat and shook himself. Water droplets fell from his coat and showered the carpet. "Bloody hell," he said. "It's soaking out there. " Sherlock sat on the couch, legs stretched out in front of him, head reclined on the back.

Seventeen Letters - out_there - Sherlock (TV. Let You Kiss Me (So Sweet and So Soft) - out_there - Sherlock (TV. The first time, John's in the middle of making a sandwich. There are four slices of bread, which he commandeers as his own -- if Sherlock wants a sandwich then Sherlock, for once, can be the one to go out and buy bread -- sitting next to a small block of cheddar and one bright red, perfectly ripe tomato. He slices the cheese thin and the tomato thick, and he's in the middle of sprinkling salt on it when the door opens. John glances over his shoulder, fast and from old habit, but it's only Sherlock. And the Cat Came Back - Ishmael - Sherlock (TV. It starts when he leaves Baker Street.

‘I’ve got to see a man about a dog,’ Sherlock says, a twinkle in his eye and the tiniest little curve of his lips that invites John to share in the joke, and John laughs to himself as Sherlock walks off. Sherlock’s knowledge of popular culture is greater than he likes to pretend. Now that they’ve grown used to each other then John has been let in on one of Sherlock’s many secrets: that he’s deeply entertained by people’s expressions when he declares that he’s never heard of the Beatles, or that he hasn’t a clue who the reigning monarch is. His general knowledge is still patchy – for example, he genuinely hasn’t bothered to retain the details of heliocentrism – but if there’s the slightest chance that a piece of information or cultural reference could pertain to his work then it’s carefully filed away. Winter's Delights - Kate_Lear - Sherlock (TV), Sherlock Holmes & Related Fandoms.

The Love Song of Dr. John H. Watson - Kate_Lear - Sherlock (TV), Sherlock Holmes & Related Fandoms. This work could have adult content. If you proceed you have agreed that you are willing to see such content. If you accept cookies from our site and you choose "Proceed", you will not be asked again during this session (that is, until you close your browser). If you log in you can store your preference and never be asked again. There's A First Time For Everything - Kate_Lear - Sherlock (TV), Sherlock Holmes & Related Fandoms. Main Content <p id="javascript-warning"> While we&#x27;ve done our best to make the core functionality of this site accessible without javascript, it will work better with it enabled. Sharp Dressed Man - Kate_Lear - Sherlock (TV), Sherlock Holmes & Related Fandoms. And stand there at the edge of my affection - coloredink - Sherlock (TV. "John. " "Mmm? " John paused in his shaving ritual.