The Portrait Chapter 7, a harry potter fanfic. Summary: After the war, Harry discovers that Voldemort dabbled in more than Horcruxes. 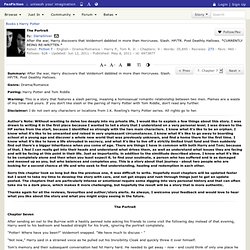 Slash. HP/TR. Post Deathly Hallows. Genre: Drama/Romance Pairing: Harry Potter and Tom Riddle Warning: This is a story that features a slash pairing, meaning a homosexual romantic relationship between two men. Disclaimer: I do not own any characters or locations from J.K. Author's Note: Without wanting to delve too deeply into my private life, I would like to explain a few things about this story. Sorry this chapter took so long but like the previous one, it was difficult to write. Thanks again for all the reviews, favourites and author/story alerts. The Portrait Chapter Seven After sending an owl to the Burrow with a hastily penned note asking his friends to come visit the following day instead of that evening, Harry went to his bedroom and headed straight for his trunk, ignoring the portrait completely.

"Potter! Tom's memory and their subsequent conversation had hit Harry hard. "Later! " Ladies Man Chapter 1: Mother: Life, a harry potter fanfic. Ladies Man From his evolution from Tom Riddle to Lord Voldemort, seven women who influenced his life the most. 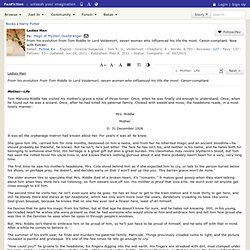 Canon-compliant. Mother—Life Tom Marvolo Riddle has visited his mother's grave a total of three times: Once, when he was finally old enough to understand. Once, when he found out he was a wizard. Mrs. Mother D. 31 December 1926 It was all the orphanage matron had known about her. She gave him life, carried him for nine months, bestowed on him a name, and from her he inherited magic and an ancient bloodline—he should probably be thankful, he knows.

The first time he saw his mother's headstone, Mrs. The older women like to speculate that Mrs. The second time he visits her, he isn't even sure why he goes. He fancies that he gets his magic from his father, but at that age he doesn't know for sure, and he hates not knowing. But, Mrs. The summer of his sixth year, he finds and murders his paternal family. "How could you? " "Why with him? Notes: Updates weekly! Megii. A Snake Named Voldemort Chapter 1, a harry potter fanfic. Chapter 1: Chapter 1 Summary: After being turned into a snake by Snape and Dumbledore and unable to change back, Lord Voldemort has no choice but to turn to the only other living Parselmouth, Harry Potter. 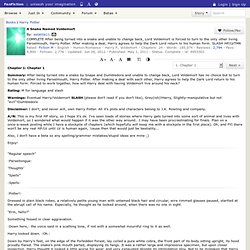 After making a deal with each other, Harry agrees to help the Dark Lord return to his human form. Forced to work together, how will Harry deal with having Voldemort live around his neck? Rating: M for language and slash Warnings: Eventual Harry/Voldemort SLASH (please don't read if you don't like), Grey(ish)! Disclaimer: I don't, and never will, own Harry Potter. A/N: This is my first HP story, so I hope it's ok. Also, I don't have a beta so any spelling/grammer mistakes/stupid ideas are mine ;) Enjoy! "Regular speech" You Know Who? Chapter 1: The Snake Under the Bed, a harry potter fanfic. Title: You Know Who? 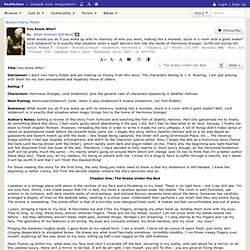 Disclaimer: I don't own Harry Potter and am making no money from this story. The characters belong to J. K. Rowling; I am just playing with them for my own amusement and hopefully those of others. Rating: T Characters: Hermione Granger, Lord Voldemort, plus the general cast of characters appearing in Deathly Hallows. Main Pairing: Hermione/Voldemort (note: when it says Voldemort it means Voldemort, not Tom Riddle). Summary: What would you do if you woke up with no memory, looking like a monster, stuck in a room with a giant snake? Author's Notes: Getting a review of this story from Torticolis and watching the film of Deathly Hallows: Part One galvanised me to finally do something about this story. For those reading this story for the first time, the only thing you really need to know is that my Voldemort is left-handed. Chapter One: The Snake Under the Bed I awaken in a strange place with pains in the cavities of my face and a throbbing in my head.

"Who are you? " "I... The love accident Chapter 1: Back to school, part 1, a harry potter fanfic. Author's note: Hello, I'm back with the sequel to 'The cave incident'. 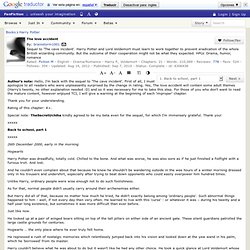 First of all, I must apologize to all readers who were unpleasantly surprised by the change in rating. Yes, The love accident will contain some adult themes (Harry's twenty, no other explanation needed :D) and so it was necessary for me to take this step. For those of you who don't want to read the mature content, however enjoyed TCI, I will give a warning at the beginning of each 'improper' chapter. Thank you for your understanding. Rating of this chapter: K+. Special note: TheSecretUchiha kindly agreed to be my beta even for the sequel, for which I'm immensely grateful.

Xxxxx Back to school, part 1 26th December 2000, early in the morning Hogwarts.