Good-morrow to our waking souls - agameofscones (orithea) - Sherlock. Applied Linguistics - what_alchemy - Sherlock. You Are So Not A Sociopath - twisting_vine_x - Sherlock. Sometimes, John wonders what it says about him that he isn’t at all scared of Sherlock Holmes. 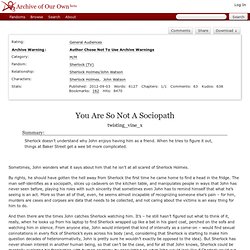 By rights, he should have gotten the hell away from Sherlock the first time he came home to find a head in the fridge. The man self-identifies as a sociopath, slices up cadavers on the kitchen table, and manipulates people in ways that John has never seen before, playing his roles with such sincerity that sometimes even John has to remind himself that what he’s seeing is an act. More so than all of that, even, he seems almost incapable of recognizing someone else’s pain – for him, murders are cases and corpses are data that needs to be collected, and not caring about the victims is an easy thing for him to do. And then there are the times John catches Sherlock watching him. It’s – he still hasn’t figured out what to think of it, really, when he looks up from his laptop to find Sherlock wrapped up like a bat in his giant coat, perched on the sofa and watching him in silence.

What Meets the Eye - worldaccordingtofangirls - Sherlock. Rise Up Above It - oreganotea - Sherlock. John understands why his potential flatmate is having trouble finding someone to share the rent with the moment he sees him. 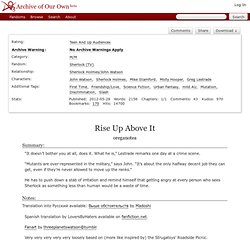 The man is mutant. His overall physique is basically human, as far as John can tell, but his skin is green and appears to be covered in scales, his fingernails look more like claws, and there is something vaguely alien about the shape of his face. None of which is nearly as unsettling as his pitch black eyes. It’s a ridiculous detail to fixate on, John muses. Fireflight - augustbird - Sherlock. 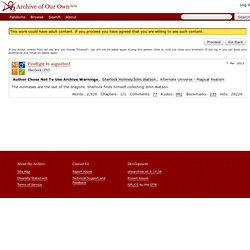 If you proceed you have agreed that you are willing to see such content. If you accept cookies from our site and you choose "Proceed", you will not be asked again during this session (that is, until you close your browser). If you log in you can store your preference and never be asked again. Tags Summary The Holmeses are the last of the dragons. Let You Kiss Me (So Sweet and So Soft) - out_there - Sherlock. The first time, John's in the middle of making a sandwich. 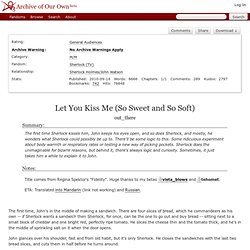 There are four slices of bread, which he commandeers as his own -- if Sherlock wants a sandwich then Sherlock, for once, can be the one to go out and buy bread -- sitting next to a small block of cheddar and one bright red, perfectly ripe tomato. He slices the cheese thin and the tomato thick, and he's in the middle of sprinkling salt on it when the door opens. John glances over his shoulder, fast and from old habit, but it's only Sherlock. He closes the sandwiches with the last two bread slices, and cuts them in half before he turns around. Sherlock is pushing aside the small collection of post -- catalogues and assorted junk mail, mostly; the occasional utility bill that John doesn't want to know about -- and lifting a familiar white, blue and red plastic bag onto the table. 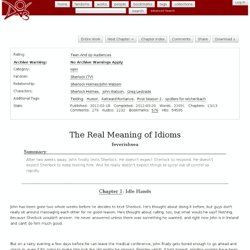 “Stop that,” his handler says in a bored tone, flipping through a magazine. She has an electric prod on her belt, but he hasn't seen her use it. She really has no reason to; her charges are all skilled slaves destined for decent placements and disinclined to risk being sent to the rendering plant. “And put on a smile, would you?” John stops fidgeting, but refuses to try for a more cheerful expression. Traffic is picking up in the hall, and vampires stroll through in ones and twos, looking over the rows of slaves standing against the walls. “Come now, Sherlock, you must see something you like,” a loud voice says to John's right, catching his attention. White Noise - rubberbutton - Sherlock (TV.

John's got the shopping done and he's walking home when a black car with dark-tinted windows slows down, crawling next to him on the street.

John stops and so does the car. The passenger door swings open. "Do get in, John,” the occupant says, and John doesn't have to see his face to recognise him. He gets in the car, nearly dropping the cumbersome bags. Mycroft Holmes smiles and nods a greeting. "I thought it was about time for our little chat. " Symbiosis - rubberbutton - Sherlock (TV. "Haven't you seen enough?

" Sherlock asks and John glances at him from his spot by the window. It's nearly midnight, but he's got the blinds drawn. Nine Tenths of the Law - Chapter 1 - bendingsignpost - Sherlock. A Study in White - Miya_Morana - Sherlock. We Meet Again - Chapter 1 - n_anon - Sherlock. Stack Overflow - ayalesca - Sherlock (TV), Sherlock Holmes & Related Fandoms. 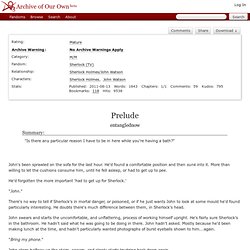 He'd found a comfortable position and then sunk into it. More than willing to let the cushions consume him, until he fell asleep, or had to get up to pee. He'd forgotten the more important 'had to get up for Sherlock.' "John. " There's no way to tell if Sherlock's in mortal danger, or poisoned, or if he just wants John to look at some mould he'd found particularly interesting. John swears and starts the uncomfortable, and unflattering, process of working himself upright. "Bring my phone. " John stops halfway up the stairs, swears, and slowly starts trudging back down again.

Sherlock doesn't demand anything else, before John makes his way to the top of the stairs, turning the handle and pushing the door open with a foot. "If you're doing bloodstain analysis in the sink again -" John stops, door knocking sharply on his elbow when it rebounds off the wall. 13 - cridecoeur - Sherlock (TV. The needle slides in and pricks the vein. 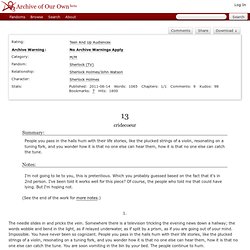 Somewhere there is a television trickling the evening news down a hallway; the words wobble and bend in the light, as if relayed underwater, as if split by a prism, as if you are going out of your mind. Impossible. You have never been so cognizant. People you pass in the halls hum with their life stories, like the plucked strings of a violin, resonating on a tuning fork, and you wonder how it is that no one else can hear them, how it is that no one else can catch the tune. You are soon vomiting in the bin by your bed. “You’re thinking. On a taxi ride across the city you immerse yourself into the driver’s tedious life, simply so the numbness won’t settle to your bones. The Sum of One Bond - luthierdreams - Sherlock (TV. No one was going anywhere. She had a lot of time for reflection. Sally’s long suspected that there was something between the two, Holmes and Watson - something other than just friendship.

She’s not a sergeant for no reason - she has been a relatively empathic and perceptive woman for some thirty years now. It’s plain to see for anyone who looked: the way they stand so close together and seek the other out when separated. When they laugh and argue and the way one will say something and look straight to the other, the other will nod and then they’ll both smile like there’s nothing better at all in the world.

That and the sheer obviousness of two grown men flatting together, neither dating and - if the grapevine was to be believed - all but living in the other’s clothes. She didn’t say anything on the matter, despite everyone else seeming to. Quite Continental - toestastegood - Sherlock (TV. Sherlock stopped in the middle of his theory, his eyes scrunching shut in surprise. His shoulders were hunched around his neck, although that had done very little to protect him. John had lunged for him. Lunged for him and – And placed a kiss against his cheek. Gentle, dry, affectionate. Like a velociraptor with potential prey in its sights, he tilted his head slightly as he evaluated current possibilities.

I can't find the words to make it unique - hypotheticalfanfic - Sherlock (TV. Eight days after Moriarty, Sherlock says, ”You aren’t as tiresome as every other human being on the planet.” It’s in a tone that, had John been paying attention, would have made everything that happened afterwards much less confusing. “That’s…oddly nice to hear, Sherlock.” John smiles, surprised and happy, a soft sort of smile. “Thank you.” Then he turns back to his stupid tabloid and continues reading. “That’s supposed to mean something, John.”