Always and Always. Even Kreacher's steak-and-kidney pie tasted like ashes in Harry Potter's mouth as he attempted to choke his dinner down. 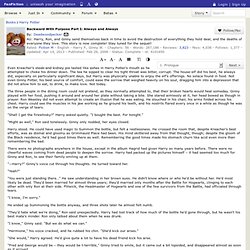 The tea he sipped to clear his tight throat was bitter, corrupt. The house-elf did his best, he always did, especially on particularly significant days, but Harry was physically unable to enjoy the elf's offerings. No solace found in food. Not even Ginny Potter, his best source of comfort, could ease the sorrow that weighed heavily on his soul, dragging him into a depression that did not allow him to eat, to drink, to make love. The Book of Albus. The Bonds Of Time. Chapter 1Anniversary Summary: During the memorial party marking the third anniversary of the Battle of Hogwarts, Death Eaters attack the Ministry of Magic. 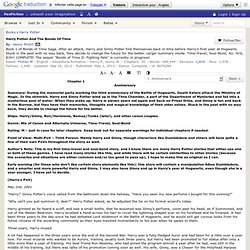 In the skirmish, Harry and Ginny Potter wind up in the Time Chamber, a part of the Department of Mysteries and fall into a mysterious pool of water. When they wake up, Harry is eleven years old again and back on Privet Drive, and Ginny is ten and back in the Burrow, but they have their memories, thoughts and magical knowledge of their older selves. Stuck in the past with no way back, they decide to change the future for the better. Ships: Harry/Ginny, Ron/Hermione, Remus/Tonks (later), and other canon couples. Cat & Mouse. Chapter 1 – Addicted Harry Potter's best friends would say that he was addicted to many things. 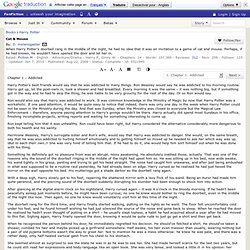 Ron Weasley would say he was addicted to his morning routine. Harry got up, let the post-owls in, took a shower and had breakfast. A Hero. A Hero "Alright class, get into your usual discussion groups. 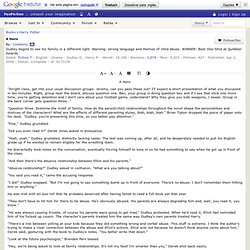 Jeremy, can you pass these out? I'll expect a short presentation of what you discussed in ten minutes. Right, group near the board, discuss question one. Ben, your group is doing question two and if I see that stick one more time, you're getting detention and I don't care about your football game, understand?

A Little More Time. A/N: This is an unashamed Spoiler-filled post-DH canon-fixing denial fic that I started the day after DH came out as a personal way of coping with the deaths of my two favourite characters. 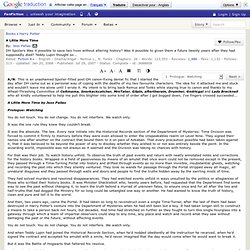 The idea for it attacked me and stuck and wouldn't leave me alone until I wrote it. What is bass music? Most musicians hate being defined by labels and genres, but let's face it: without them, discovering new music that we actually like would be a long and very slow process. 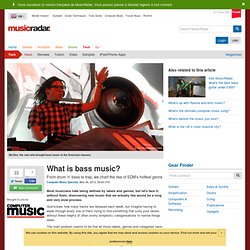 God knows how many tracks are released each week, but imagine having to wade through every one of them trying to find something that suits your tastes, without these helpful (if often overly simplistic) categorisations to narrow things down. The main problem seems to be that all those labels, genres and categories have an innate imprecision - a sort of aesthetic flexibility that allows them to be shrunk, stretched and twisted to fit each listener's personal taste. Recnac Transfaerso. A/N: This fic takes place pre-OotP and was mostly written before the book came out, though it was posted after. 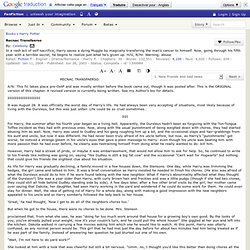 This is the ORIGINAL version of this chapter. A revised version is currently being written. See my Author's bio for details. IiIiIiIiIiIiIiIiIiIiIiIiIiIiI It was August 28. IiIiI For Harry, the summer after his fourth year began as a living hell. Flawed Perfection. Author's Note: Er...welcome to the sequel everyone!!! 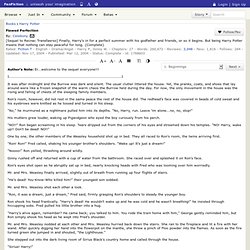 It was after midnight and the Burrow was dark and silent. The usual clutter littered the house. Yet, the pranks, coats, and shoes that lay around were like a frozen snapshot of the warm chaos the Burrow held during the day. For now, the only movement in the house was the rising and falling of chests of the sleeping family members. Ron's room, however, did not rest in the same peace the rest of the house did. A Stranger in an Unholy Land. This story bares no relation to Harry Potter and the Emerald Sceptre. 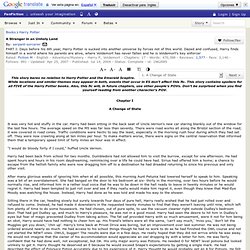 While locations and similar themes may appear in both, events that occur in ES don't affect this fic. This story contains spoilers for all FIVE of the Harry Potter books. Of Western Stars. Disclaimer: all characters belong to J K Rowling and Warner brothers. a/n a strange title? 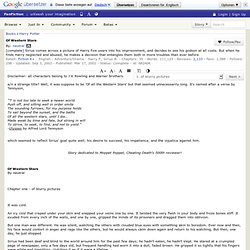 Wishcraft. Title: Wishcraft (not a rip-off from the movie. I had the title idea before I ever saw the movie in its resting place at Blockbuster) Summary: AU- Sirius is suffering in Azkaban & 4 yr. old Harry is suffering at the hands of the Dursley's. Will either of them escape their fate? And what about the Dementors? I can definitely say this idea has probably never been done before. The World As We Knew It. The World as We Knew It Disclaimer:I own nothing. All the credit goes to JK Rowling. Rating: PG-13 for language and violence. Warnings: Violence, language, character death, minor DH spoilers in later chapters (mostly because I made lucky guesses about Horcruxes and a certain greasy-haired Death Eater).