Just A Little, a natsume yūjin-chō fanfic. Just a Little A Christmas Gift for Otome. .x.x.x.x.x.x.x.x. 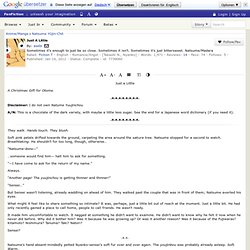 Disclaimer: I do not own Natume Yuujinchou A/N: This is a chocolate of the dark variety, with maybe a little less sugar. See the end for a Japanese word dictionary (if you need it). Natsume's Book of Friends [Archive of Our Own] - Comodo IceDragon. For Elaine Broadcasting [放送コード] 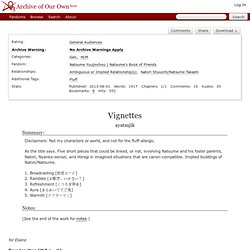 When the Sun Rises - mikkey_bones - Natsume Yuujinchou. The shrine is cold in the midwinter darkness. 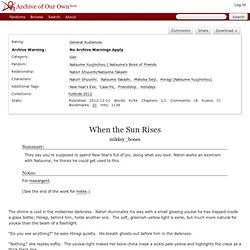 Natori illuminates his way with a small glowing youkai he has trapped inside a glass bottle; Hiiragi, behind him, holds another one. The soft, greenish-yellow light is eerie, but much more natural for youkai than the beam of a flashlight. “Do you see anything?” Dreams - Sententiae - Natsume Yuujinchou. There are places Madara doesn’t like to visit, and the foremost of these are Natsume’s dreams. 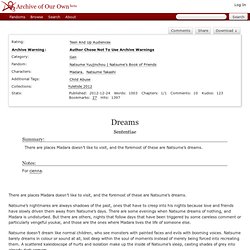 Natsume’s nightmares are always shadows of the past, ones that have to creep into his nights because love and friends have slowly driven them away from Natsume’s days. There are some evenings when Natsume dreams of nothing, and Madara is undisturbed. But there are others, nights that follow days that have been triggered by some careless comment or particularly vengeful youkai, and those are the ones where Madara lives the life of someone else. Natsume doesn’t dream like normal children, who see monsters with painted faces and evils with booming voices. Natsume barely dreams in colour or sound at all, lost deep within the soul of moments instead of merely being forced into recreating them.

When Madara is sucked in, it is never as an invited guest into Natsume’s private, closed off world. But Natsume consists of so much more than the words that others have tried to carve him from. “Please! Long Trip Home - Kaworu - Natsume Yuujinchou. It took him a while to realise what was happening. 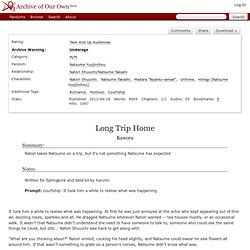 At first he was just annoyed at the actor who kept appearing out of thin air, dazzling roses, sparkles and all. He dragged Natsume wherever Natori wanted -- tea houses mostly, or an occasional walk. It wasn't that Natsume didn't understand the need to have someone to talk to, someone who could see the same things he could, but still... Natori Shuuichi was hard to get along with. "What are you thinking about? " And every single step of the way - Hokuto - Natsume Yuujinchou. He was on his back on the ground, and the darkness lay over him like a cold, slightly wet, and generally uncomfortable blanket. 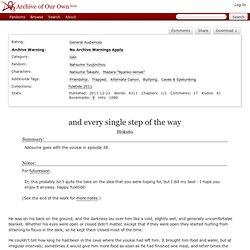 Whether his eyes were open or closed didn't matter, except that if they were open they started hurting from straining to focus in the dark, so he kept them closed most of the time. He couldn't tell how long he had been in the cave where the youkai had left him. It brought him food and water, but at irregular intervals; sometimes it would give him more food as soon as he had finished one meal, and other times the youkai wouldn't appear until hunger pangs had him curled up around his empty stomach. Romantic Cliches - saezutte - Natsume Yuujinchou. The first time Natsume noticed it, it was so obvious even he couldn't dismiss it. 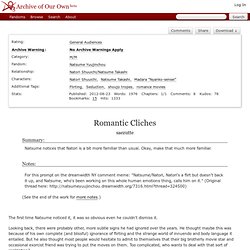 Looking back, there were probably other, more subtle signs he had ignored over the years. He thought maybe this was because of his own complete (and blissful) ignorance of flirting and the strange world of innuendo and body language it entailed. But he also thought most people would hesitate to admit to themselves that their big brotherly movie star and occasional exorcist friend was trying to put the moves on them. Too complicated, who wants to deal with that sort of realization? But that first time he noticed, it was too obvious to avoid. Natori had invited him out for some training in basic youkai defense techniques. So Natori was showing him how to draw some of his exorcism circles with chalk on the floor of the house he stayed in - rented? "Close, close. "You see how it's done? "Uh? " Yuujinchou: FanFic: Weak. Been a while, but trying my hand at a bit of genfic again.

Title: WeakCharacter(s): Madara, Takashi NatsumeRating: PG (one case of a curse word)Warning: N/ASummary: Madara watches over Natsume. "I thought you were going to eat that and take the book for yourself? " He shifted his muscles, watching carefully out of the corner of one eye as the pale boy murmured in his sleep and turned, burying his face in thick white fur.

And all our yesterdays - highboys - Natsume Yuujinchou. The sky is clear when they get off the plane. 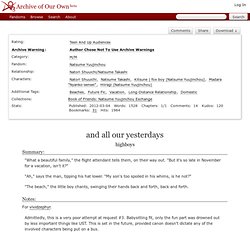 The man with the shady sunglasses and the drab coat offers his hand to the younger man beside him, but it is the child between them that takes it. "What a beautiful family," the flight attendant tells them, on their way out. "But it's so late in November for a vacation, isn't it? " "Ah," says the man, tipping his hat lower. "My son's too spoiled in his whims, is he not? " "The beach," the little boy chants, swinging their hands back and forth, back and forth. The places we call home - jan - Natsume Yuujinchou. The first time 'Nyanko-sensei' transforms in their apartment is a disaster. 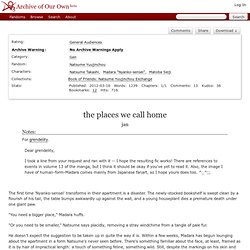 The newly-stocked bookshelf is swept clean by a flourish of his tail, the table bumps awkwardly up against the wall, and a young houseplant dies a premature death under one giant paw. "You need a bigger place," Madara huffs. "Or you need to be smaller," Natsume says placidly, removing a stray windchime from a tangle of pale fur. Forever - Sinnatious - Natsume Yuujinchou. "...Natsume? 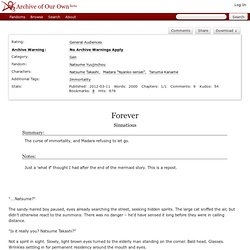 " The sandy-haired boy paused, eyes already searching the street, seeking hidden spirits. The large cat sniffed the air, but didn't otherwise react to the summons. There was no danger – he'd have sensed it long before they were in calling distance. "Is it really you? Ambition and Distraction - paperwar - Natsume Yuujinchou. "I'm afraid that won't be possible," Natori said into the phone.

His voice was at his silkiest, every word a masterpiece of airy nonchalance. "It's a very busy time for me right now. " The slightest frown marred his forehead as he listened to the response. "Sorry, sorry! First Trip On a Ferris Wheel - Sinnatious - Natsume Yuujinchou. The carriage wheeled ever so slowly into the sky. Natsume sat, hands gripping his knees, warily eyeing the other occupant in the softly swaying compartment. "Are you scared of heights, Natsume? "