Vc_fanfiction: Fic: Your Changing Face (Lestat) Originally posted to vc_media Your Changing FaceA Love Story When you are old and grey and full of sleep,And nodding by the fire, take down this book,And slowly read, and dream of the soft lookYour eyes had once, and of their shadows deep;How many loved your moments of glad grace,And loved your beauty with love false or true,But one man loved the pilgrim Soul in you,And loved the sorrows of your changing face- Excerpt from When You Are Old, by WB Yeats You think I don't appreciate you, but I do. 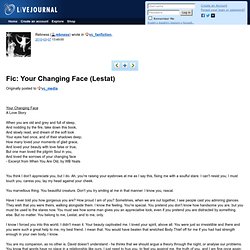 Ah, you're raising your eyebrows at me as I say this, fixing me with a soulful stare. You marvellous thing. Have I ever told you how gorgeous you are? I know I forced you into this world. You are my companion, as no other is. You put the world to rights. It may not seem like it, but I don't keep you around just for your beauty, you know. You make some appreciative sound or another. Vc_fanfiction: Fic: The Undead. This spec is just a flippant Louis/Lestat/David piece for Christmas. 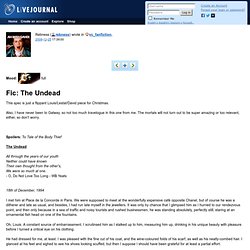 Also, I have never been to Galway, so not too much travelogue in this one from me. The mortals will not turn out to be super amazing or too relevant, either, so don't worry. Spoilers: To Tale of the Body Thief The Undead All through the years of our youthNeither could have knownTheir own thought from the other's,We were so much at one 18th of December, 1994 I met him at Place de la Concorde in Paris.

Oh, Louis. He had dressed for me, at least. Of course, everything in my own appearance was splendid: excellent cut of coat, finest leather gloves, Italian leather boots and immaculately-styled hair. I placed my hands on his shoulders. Vc_fanfiction: Fic: Children of the Fatherland (L/L) Children of the Fatherland by Becky Durden In honour of France, and New Orleans, on Bastille Day because I can't be in either place. ;_; Set in 2009 or 2010, ignoring contrivances of upsettingly bad later books. 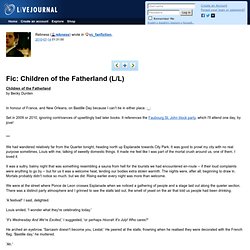 It references the Faubourg St. We had wandered relatively far from the Quarter tonight, heading north up Esplanade towards City Park. It was a sultry, balmy night that was something resembling a sauna from hell for the tourists we had encountered en-route -- if their loud complaints were anything to go by -- but for us it was a welcome heat, lending our bodies extra stolen warmth. We were at the street where Ponce de Leon crosses Esplanade when we noticed a gathering of people and a stage laid out along the quieter section. 'A festival! ' Louis smiled. 'It's Wednesday And We're Excited,' I suggested, 'or perhaps Hoorah It's July! He arched an eyebrow. 'Ah.' 'Let's go,' he said shortly. Nicoleeolee. The Forbidden Archive. Ellipsis. SANGUIBIBITOR. A certain author who discourages fan fiction has created some characters who seem to have more to say... and so Wiebke Fesch made them say it. 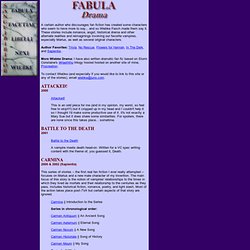 These stories include romance, angst, historical drama and other alternate realities and reimaginings involving our favorite vampires, especially Marius, as well as several original characters. Author Favorites: Trivia, No Rescue, Flowers for Hannah, In The Dark, and Sapientia.. More Wiebke Drama: I have also written dramatic fan fic based on Storm Constaine's Wraeththu trilogy hosted hosted on another site of mine, Procreation. To contact Wiebke (and especially if you would like to link to this site or any of the stories), email wiebke@juno.com. Attacked! This is an odd piece for me (and in my opinion, my worst, so feel free to skip!!!!) Battle to the Death A vampire meets death head-on. CARMINA 2000 & 2002 (Sapientia) Carmina || Introduction to the Series Series in chronological order: Carmen Antiquum || An Ancient Song Carmen Aeternum || Eternal Song.