Indigo Oracles. Habit - Lindensphinx - Tokyo Babylon, X/1999. The hold music is tinny, cheerful, with a poppy beat interrupted every twenty seconds by reassurances from Tokyo Electric Power Company that someone will be with him shortly. 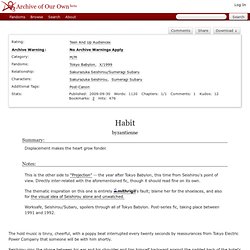 Seishirou pins the phone between his ear and his shoulder and tips himself backward against the padded back of the hotel's Western-style chair. His feet go up onto the table, casual sprawl. One of his bootlaces is stained dull red, just barely visible against the black. He'll have to change it out; it looks like he'd been tramping through mud. The music in his ear wavers, cuts to static, cuts back in, unchanged. AITE - lisan - X/1999, Tokyo Babylon. The Last Time - stillskies - X/1999. Lies - Etrangere - Tokyo Babylon, X/1999. .: behold the void :. A Matter of Principle [a TB/X fic by Leareth] He came after the rain began, a solid shadow that appeared on Subaru's balcony like a large raven finding shelter for the night. 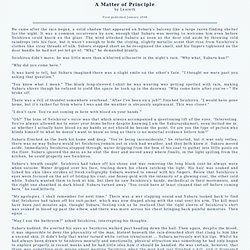 It was a common occurrence by now, enough that Subaru was moving to welcome him even before Seishirou could knock on the glass. The wind attacked Subaru as soon as the door slid aside by throwing cold raindrops into his face, but it wasn't enough to hide the cloying, slightly metallic scent that rose from Seishirou's clothes like stray threads of silk.