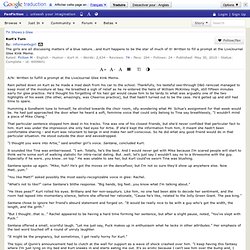 Rain pelted down on Kurt as he made a mad dash from his car to the school. Thankfully, his tasteful see-through D&G raincoat managed to keep most of the moisture at bay. He breathed a sigh of relief as he re-entered the halls of William McKinley High, still fifteen minutes early for glee practice. He'd thought his forgetting of his hair gel would cause him to be tardy to what was arguably one of the two highlights of his week (the other, amazingly, was Cheerios practice), but that hadn't turned out to be the case. He'd gelled up and still had time to spare. Humming a Sondheim tune to himself, he strolled towards the choir room, idly wondering what Mr.

That particular sentence stopped him dead in his tracks. "I thought you were into Artie," said another girl's voice. It sounded like Tina was embarrassed. Santana spoke up again. "You like Matt? " "What's not to like? " "He likes peas? " "Hey, whatcha doing? " Mr. You can never expect the Unexpected!, a glee fanfic. This was inspired by a prompt in the Glee Angst Meme which went like this: The Glee kids decide to do a date auction to raise money for glee club. 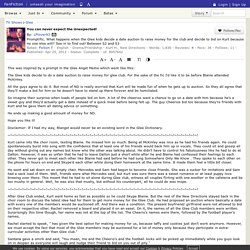 For the sake of the fic I'd like it to be before Blaine attended McKinley. All the guys agree to do it. All The Single Ladies, a glee fanfic. Hey guys! 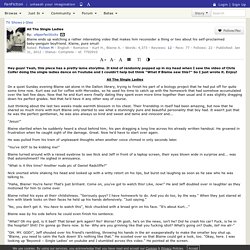 Yeah, this piece has a pretty lame storyline. It kind of randomly popped up in my head when I saw the video of Chris Colfer doing the single ladies dance on Youtube and I couldn't help but think "What if Blaine saw this? " So I just wrote it. Enjoy! All The Single Ladies On a quiet Sunday evening Blaine sat alone in the Dalton library, trying to finish his part of a biology project that he had put off for quite some time now.

Just thinking about the last two weeks made warmth blossom in his chest. "Jesus! " Blaine startled when he suddenly heard a shout behind him, his pen dragging a long line across his already written handout. He was pulled from his train of unpleasant thoughts when another voice chimed in only seconds later. Blackbird, a glee fanfic. Disclaimer: I do not own any part of Glee; it all belongs to 20th Century Fox, Ryan Murphy, Ian Brennan, Brad Falchuk, et al. 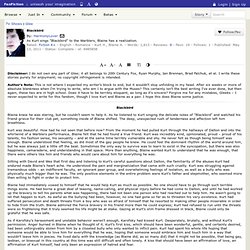 I write these stories purely for enjoyment; no copyright infringement is intended. Author's Note: This is not where I expected my writer's block to end, but it wouldn't stop unfolding in my head. After six weeks or more of absolute blankness when I'm trying to write, who am I to argue with the Muses? This certainly isn't the best writing I've ever done, but then again, these two are in high school. On Duty - fruitflyxo - Glee. Kurt was so ready to get back to his dorm and collapse that he almost broke out in a run. 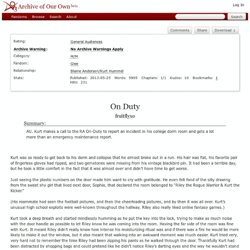 His hair was flat, his favorite pair of fingerless gloves had ripped, and two gemstones were missing from his vintage blackbird pin. It had been a terrible day, but he took a little comfort in the fact that it was almost over and didn’t have time to get worse. Just seeing the plastic numbers on the door made him want to cry with gratitude. He even felt fond of the silly drawing from the sweet shy girl that lived next door, Sophia, that declared the room belonged to “Riley the Rogue Warrior & Kurt the Kicker.” (His roommate had seen the football pictures, and then the cheerleading pictures, and by then it was all over. 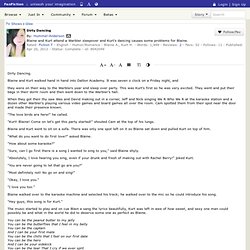 Blaine and Kurt walked hand in hand into Dalton Academy. It was seven o clock on a Friday night, and they were on their way to the Warblers year end sleep over party. This was Kurt's first so he was very excited. They went and put their bags in their dorm room and then went down to the Warbler's hall. Falling In - fruitflyxo - Glee. I’m just a normal boy that sank when I fell overboard “Now Kurt, I’ve put three layers of SPF 100 on you just like you asked. 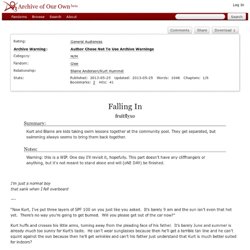 It’s barely 9 am and the sun isn’t even that hot yet. There’s no way you’re going to get burned. Will you please get out of the car now?” Cheerios need Kurt, a glee fanfic. A/N: This is an idea I had so I decided to write it. 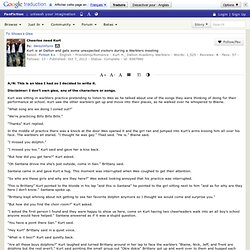 Disclaimer: I don't own glee, any of the characters or songs. Kurt was sitting in warblers practice pretending to listen to Wes as he talked about one of the songs they were thinking of doing for their performance at school. Kurt saw the other warblers get up and move into their places, as he walked over he whispered to Blaine. "What song are we doing I zoned out? " "We're practicing Bills Bills Bills. " "Thanks" Kurt replied. In the middle of practice there was a knock at the door Wes opened it and the girl ran and jumped into Kurt's arms kissing him all over his face. I'm Hoping You Can Feel Me in Your Chest - fruitflyxo - Glee. Blaine’s face is on the screen, smiling all crinkled cheeks and almost-disappeared eyes and a warm knife right to Kurt’s chest. 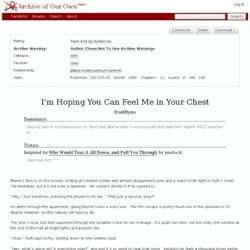 He hesitates, but it’s not even a question. He couldn’t decline it if he wanted to. “Hey,” Kurt breathes, pressing the phone to his ear. ”Wait just a second, okay?” He darts through the apartment, giving Rachel’s bed a wary look. The fire escape is pretty much out of the question in 20 degree weather, so the hallway will have to do. The Adventures of Kitty Kurt, a glee fanfic. Blatant Attraction, Oblivious Reaction Chapter 1, a glee fanfic. Disclaimer: Glee is owned by FOX and Ryan Murphy I wanted to do a protective brotherly Finn and oblivious that he's really sexy Kurt, because it kinda appeals to me. 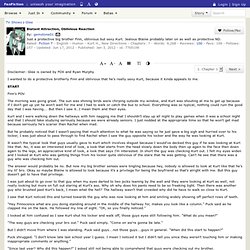 Finn's POV The morning was going great. The sun was shining birds were chirping outside my window, and Kurt was shouting at me to get up because if I don't get up yet he won't wait for me and I had to walk or catch the bus to school. Everything was so typical, nothing could ruin the good day that I was having…. Kurt and I were walking down the hallways with him nagging me that I shouldn't stay up all night to play games when it was a school night and that I should take studying seriously because we were already seniors. But he probably noticed that I wasn't paying that much attention to what he was saying so he just gave a big sigh and hurried over to his locker, I was just about to pass through to find Rachel when I saw the guy opposite his locker and the way he was looking at Kurt.

The answer would probably be no. I've got the Best of Both Teenage Dreams, a glee fanfic. 'Well, Kurt came to spy on us, so surely we should be able to spy on them... We're not even competing against them anymore, so it shouldn't matter! ' Wes grunted indignantly. Take Me or Leave Me, a glee fanfic. The Warblers common room was filled with a casual atmosphere. After rehearsal, the boys tended to stay behind to just chill and hang out. Wes, David, Thad, Kurt and Blaine were chilling on the sofas chatting about their performance at Breadstix. 'Thanks for doing it guys.' Kurt smiled. Blaine looked at him, and the others looked at each other. The Way Things Are Chapter 1: Prologue, a glee fanfic. A/N: Okay, so I know I promised a part two for one of my drabbles, but I came up with this idea and couldn't resist!

So here's a little bit of an intro to what this story's going to be about. It's like a mini-prologue, almost… Just over 150 words. But enjoy! Gay or European: Legally Glee, a glee fanfic. A/N: I honestly don't know anymore… There! Right There! "Everyone, I'd like you all to meet my boyfriend from France, Kurt Hummel. " Rachel stood at the front of the choir room, introducing her supposed boyfriend, a transfer student from France. Supposedly.

Cos everyday I love you a little bit more, a glee fanfic. Sam went to Dalton. Blaine hearts Kurt and I do not own glee. Thats all you need to know :) Opposites Attract, a glee fanfic. A/N: This is probably the most original idea I've had in a long time. And it's so hilarious. New York, New York And the Warblers, a glee fanfic. November 9th, a glee fanfic.

The alarm buzzed annoyingly, disturbing the two men from their slumber. Born This Way, a glee fanfic. Born This Way After the tear jerker that was 'Somewhere only we know', Kurt managed to persuade the New Directions (mainly Rachel) to perform for the Warblers as his goodbye present for them, to thank them for all they had done for him. And, they were doing the best song for it, just as a passing message. Blaine was excited. There was something about seeing Kurt back performing with his family that was exhilarating. Sure he had stalked Kurt on YouTube, but this seemed more intimate. Give Up The Funk? No Way!, a glee fanfic. Who Could it Be?, a glee fanfic. Title: Who Could it Be? Started: 8/26/11 1:13 a.m. Finished: 8/26/11 3:31 a.m. Summary: So who's the best kisser in New Directions? Only one person knows that. Very random, very short one-shot! A Whole New World, a glee fanfic.