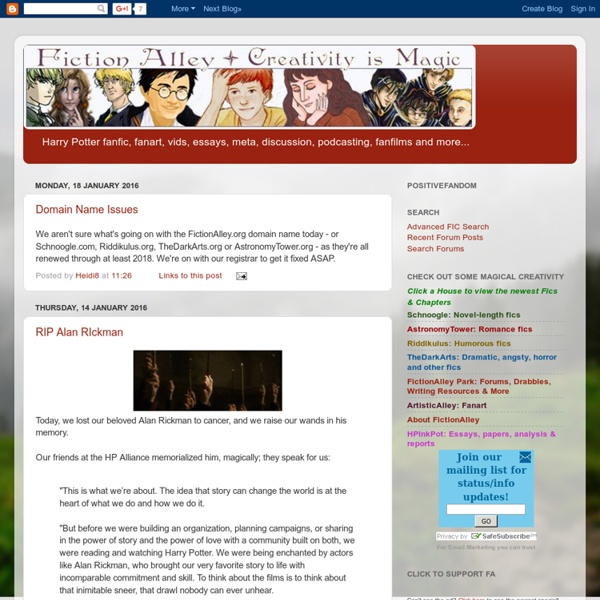 Occlumency :: A Severus Snape archive Potions and Snitches Home - Sycophant Hex adultfanfiction.net Ashwinder :: To bewitch the mind and ensnare the senses Harmony Bites Author has written 27 stories for Harry Potter, Star Trek: 2009, Buffy: The Vampire Slayer, and Firefly. Believe it or not, it was The Half Blood Prince that made Snape's character intriguing to me and sent me in search of the fandom and its fan fiction. I saw plenty in the novel to make me believe the reader was being set up, and not all was what it seemed--so I went looking and found that others saw the same things I did. Then I stumbled upon Snape/Hermione fan fiction, and I was lost. Some very fine writers not only convinced me the ship worked better than I could have imagined, but made me fall in love with their vision of Snape. And if that Severus Snape, devious rather than evil, is ultimately not canon come Book Seven, so be it. I'm not a Brit but trying to write like one in HPfic, so any pointers on that (or any other crit) would be appreciated. Links to all my stories and information on updates can be found on my Live Journal Happy reading (I hope)!

Pet Project Chapter 1: Default Chapter, a harry potter fanfic Disclaimer: Neither Severus nor Hermione belong to me. Everything belongs to the JK Rowling. I only get to play in the sandbox she's provided. Thanks to raven gr, Liz, Peri and queenp for making the story presentable. Chapter 1 – Revelations and Eavesdropping Severus knew better than to smirk in the face of his colleague's rage. So really, driving Minerva McGonagall into a sputtering, near apoplectic fit just wasn't something he could simply pass up. "Really, Minerva," he drawled, his tone one of someone who honestly doesn't see what the fuss is about, "it was just a prank between boys." "A prank?" Severus smiled though it lacked all warmth. He affected a look of thoughtfulness as if trying to remember a long ago memory before turning slightly to where Dumbledore sat behind his large desk. Seeing his fellow Head of House opening her mouth to start her argument again, Severus cut her off. At that Minerva found her outraged voice. "It is not I who thinks so, Minerva. "Forgive me. "Yes.

Accio Quote!, the Largest Archive of J.K. Rowling quotes on the web