Classified Chapter 1, a Harry Potter + Avengers Crossover fanfic. So, micro-series time, and we have a dandy here. 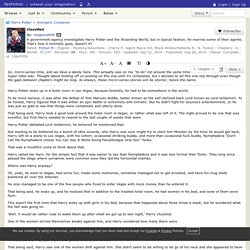 This actually was on my "to-do" list around the same time Super Date was. Thought about holding off on posting on this one until it's completed, but I decided to let this one slip through even though the gaps between chapters might be long. As always, these micro-series stories will be shorter, hence the name. Harry Potter woke up in a hotel room in Las Vegas, because honestly, he had to be somewhere in the world. To be more serious, it was after the defeat of Tom Marvolo Riddle, better known as the self-stylized Dark Lord known as Lord Voldemort. That being said, Harry took a good look around the hotel room in Vegas, or rather what was left of it. Harry Potter defeated Lord Voldemort, he believed he mentioned that.

That was a mouthful come to think about that. Harry called her Nym, for the simple fact that it was easier to say than Nymphadora and it was less formal than Tonks. Where was Harry anyway? "So, who are you…. and….. " The Nargles are flying low today, a harry potter fanfic. Hi :) So this is the reason one should not give me harem parodies to read…I end up wanting to write them. 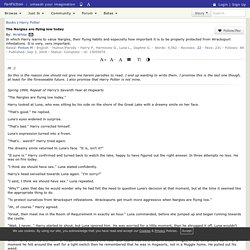 I promise this is the last one though, at least for the foreseeable future. Dancing in the Green, a harry potter fanfic. Disclaimer I don't own Harry Potter. 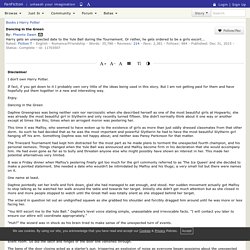 If fact, if you get down to it I probably own very little of the ideas being used in this story. But I am not getting paid for them and have hopefully put them together in a new and interesting way. Enjoy. Chaos of the Potter Family Chapter 1, a harry potter fanfic. The Chaos of House Potter Wanda: I don't know if you remember Lord and Lady of the Past and Future, but I ended up taking the story down because I found I had nowhere for it to go. 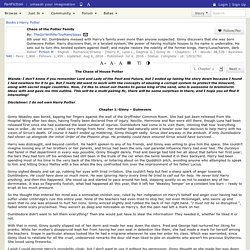 But I really did want to work with the concepts of abusing a corrupt system to protect the innocent, along with secret magic countries. Now, I'd like to shout out thanks to garaa king of the sand, who is awesome to brainstorm ideas with and gave me this outline. This will be a multi pairing fic, there will be some surprises in there, and I hope you all find it interesting! Harry and a Vampire Chapter 22, a Harry Potter + Rosario + Vampire Crossover fanfic. Harry had told the others that he expected an attack on the day before the 'reveal' became active. 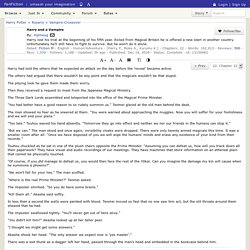 The others had argued that there wouldn't be any point and that the magicals wouldn't be that stupid. The pitying look he gave them made them worry. Then they received a request to meet from the Japanese Magical Ministry. The Three Dark Lords assembled and teleported into the office of the Magical Prime Minister. "You had better have a good reason to so rudely summon us. " The man showed no fear as he sneered at them. Archiveofourown.

Harry Potter and the Rune Stone Path Chapter 1: Prologue: Lily's Chest of Awesome, a harry potter fanfic. Disclaimer: I do not own anything related to Harry Potter. 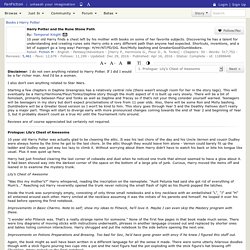 If I did I would be a far richer man. And I'd be a woman. I also don't own anything related to Star Wars. Starting a few chapters in Daphne Greengrass has a relatively central role (there wasn't enough room for her in the story tags). This will eventually be a Harry/Hermione/Fleur/Tonks/Daphne story though the multi aspect of it is built up very slowly. Reviews are of course appreciated but certainly not required. Prologue: Lily's Chest of Awesome 10 year old Harry Potter was actually glad to be cleaning the attic. Harry had just finished clearing the last corner of cobwebs and dust when he noticed one trunk that almost seemed to have a glow about it. Partners? Chapter 1: A Perilous Partnership, a harry potter fanfic. 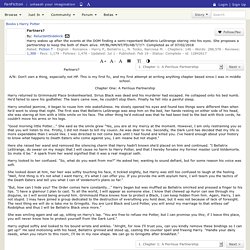 A/N: Don't own a thing, especially not HP. This is my first fic, and my first attempt at writing anything chapter based since I was in middle school. Unrestricted Warfare, a harry potter fanfic. 56° 31′ 0″ N, 12° 5′ 0″ W wreck of the MV Vogtland Operation Sandcastle Harry looked at the lumpy, slimy barrel and Sergeant Major (Ret) Jones nodded "Those are the ones, haul out the rest Harry. 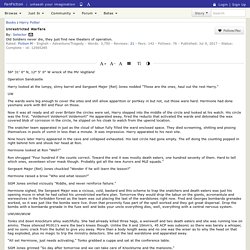 " The wards were big enough to cover the sites and still allow apparition or portkey in but not, out those were hard. Hermione had done yeomans work with Bill and Fleur on those. Now it was all ready and all over Britain the circles were set, Harry stepped into the middle of the circle and looked at his watch. Hedwig Slightly Unhinged, a harry potter fanfic. AN: I do not own Harry Potter. 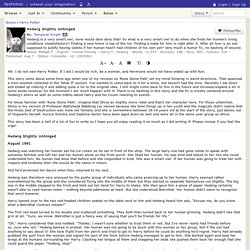 If I did I would be rich, be a woman, and Hermione would not have ended up with Ron. This story came about some time ago when one of my reviews on 'Rune Stone Path' set my mind thinking in weird directions. That spawned a mini-oneshot collected in the 'What If' section. I've wanted to come back to it for a while, but haven't had the time. Recently I sat down and ended up redoing it and adding quite a lot to the original idea. Same Song Different Verse Chapter 1, a Star Wars + Harry Potter Crossover fanfic. Same Song Different Verse Chapter one It's the song that never ends! 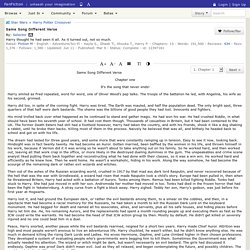 Harry smiled as Fred repeated, word for word, one of Oliver Wood's pep talks. The troops of the battalion he led, with Angelina, his wife as his second, grinned. Harry did too, in spite of the coming fight. His mind trolled back over what happened as he continued to stand and gather magic. The dream had lasted for three good years, and some more that were constantly ramping up in tension. The XXXX You Say Chapter 1, a harry potter fanfic. Chapter 1 "The fuck you say. " The goblin glared for a moment then chuckled "No wizard, you have been played like a fiddle since your unfortunate parents fell for the lies of an idiot. " Bonecrusher, the Potter account manager, chuckled some more. "Fortunately for you, as he very illegally intercepted your Gringotts mail, we can undo much of his idiocy.

All the withdrawals from your trust vault not made by you for one, and educating you in your responsibilities regarding your Gringotts managed Family holdings for another. Harry blinked "I'm tired of this crazy ass wizarding world and I want out. " Bonecrusher frowned "The Potters have extensive holdings all over the planet wizard.

" Harry flipped through the tome and stopped at a picture of a large three story house with a wraparound porch half way up a forested hill with several barns and out buildings "This one. " Harry Potter sat through the briefing obviously designed to lull him to sleep and listened intently. The Accidental Bond Chapter 1: Trolls Can Be Hazardous, a harry potter fanfic. Title: The Accidental BondRating: PG-15, A/UPairing: Harry/multiSummary: Harry finds that his "saving people thing" is a power of its own, capable of bonding single witches to him if their life is in mortal danger, with unusual results. ((A/N: I will follow the books at times, and if you find sections of text in bold, those passages are quoted from the appropriate book, written by JKR.

I will keep that to a minimum and probably only in the first chapter, but sometimes, the original text just works so well to set up my story. :) I had not ever planned on doing a true "multi" story, but this idea just wouldn't leave me alone. Also, while mature themes will occasionally come along, there will be no explicit scenes, although I may imply a lot and leave the rest up to your imagination. Letters from the Asylum Chapter 1, a harry potter fanfic. This fic was inspired by AJT's That Boy Is Trouble, and SilverWolf7007's Dear Order. Both are amazingly funny stories, and this will probably pale in comparison, so I'd advise reading this first, so as not to be disappointed as a result of reading the better fics which inspired it.

Also, fair warning, characters are OOC, but hopefully not overly so in most cases. Disclaimer: I hate Deathly Hallows. The only good things about that book, are that it gives H/Hr shippers an exceptional plot device to push the two best friends together, and it gives Harry a rather obscure way to possibly hook up with female ghosts (Master of Death thing). DUEL Chapter 1: First Duel, a harry potter fanfic. Duel Master Prologue Reason to Duel Albus Dumbledore sat in his office, currently still reflecting on the recent student additions to Hogwarts, particularly Harry Potter, and what his future held.

From what little he had already gleaned from the boy either through asking the staff, or a slight amount of legilimency he had performed on him gave him the idea that Harry was a good kid, and quite intelligent despite his apparent lack of knowledge on the wizarding world. He hoped that he would be able to improve over time and live out the destiny he had in mind for him. Recall by megamatt09. MILF Patrol by megamatt09. Harry Potter and the New Age of Dinosaurs Chapter 1: Prologue, a Harry Potter + Jurassic Park Crossover fanfic. Harry Potter and the New Age of Dinosaurs By: DJ Rodriguez (Author's Notes: Well, many of you asked for it, PM'd me about it, and demanded it!

He's Not Dead Yet Hello Dear Readers, Our Lady o'the Bless'd Do Over - Book 2 by RotaryFile. A Champion Chapter 1, a harry potter fanfic. Chapter 1 A Champion? He was chosen as a Champion how ridiculas that thought was to him. Harry stared into the night sky and kicked the wall in frustration. I don't care about this stupid competition.

The Love of Three Chapter 1: Girlfriends. HP and the Return of the Valkyrie Chapter 1 Petunia. Beyond the Veil Chapter 1, a Harry Potter + X-Men: Evolution Crossover fanfic.