The Missing Link Chapter 1, a harry potter fanfic. Please note that this story doesn't follow the original plot and I do not own any of the characters in Harry Potter except those that I created. 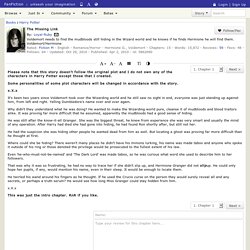 Some personalities of some plot characters will be changed in accordance with the story. x.X.x It's been two years since Voldemort took over the Wizarding world and he still saw no sight in end, everyone was just standing up against him, from left and right. Yelling Dumbledore's name over and over again. Why didn't they understand what he was doing? He was still after the know-it-all Granger. He had the suspicion she was hiding other people he wanted dead from him as well.

Where could she be hiding? Even 'he-who-must-not-be-named' and 'The Dark Lord' was made taboo, so he was curious what word she used to describe him to her followers. That was why it was so frustrating, he had no way to trace her if she didn't slip up, and Hermione Granger did not slipup. He twirled his wand around his fingers as he thought. X.X.x This was just the intro chapter. Serpentine Series Serpentine: Chapter 1, a harry potter fanfic.

Serpentine Part One: Into the Shadows The menacing wizard gripped the armrests of his leather chair as he gazed, transfixed, into the blazing fire. 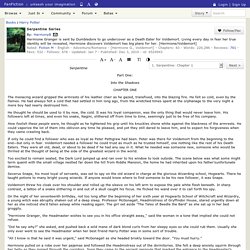 He felt so cold, even by the flames. He had always felt a cold that had settled in him long ago, from the wretched times spent at the orphanage to the very night a mere boy had nearly destroyed him. He thought he should be used to it by now, the cold. How foolish these people were, he thought as he tightened his grip until his knuckles shone white against the blackness of the armrests.

If only he could find a follower who was as loyal as Peter Pettigrew had been. Too excited to remain seated, the Dark Lord jumped up and ran over to his window to look outside. Severus Snape, his most loyal of servants, was set to spy on the old wizard in charge at the glorious Wizarding school, Hogwarts. Voldemort threw his cloak over his shoulder and rolled up the sleeve on his left arm to expose the pale white flesh beneath.

Dark Paradise, a harry potter fanfic. Disclaimer: I am not JK Rowling. 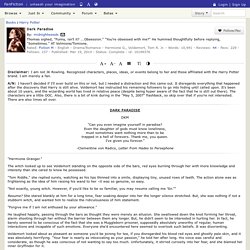 Recognized characters, places, ideas, or events belong to her and those affiliated with the Harry Potter brand. I am merely a fan. A/N: I haven't decided if I'll ever build on this or not, but I needed a distraction and this came out. It disregards everything that happened after the discovery that Harry is still alive. Voldemort has instructed his remaining followers to go into hiding until called upon. "Can you even imagine yourself in paradise? The Forbidden Ship Chapter 1: The Restricted Section, a harry potter fanfic. Disclaimer: As usual, I'm not JK Rowling and therefore don't own anything related to the Harry Potter series and I make no money from writing these drabbles. 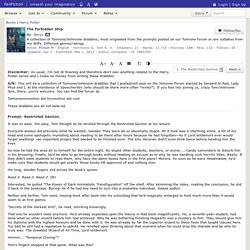 A/N: This will be a collection of Tomione/Volmione drabbles that I posted/will post on the Tomione Forum started by Serpent In Red, Lady Miya and I, at the insistence of Speechwriter (who should be there more often *winks*). If you feel like joining us, crazy Tom/Volmione fans, there, you're welcome. You can find the forum at: Tomioneconvention dot forumotion dot com These drabbles are all not beta-ed. Captured Chapter 1: The Art of Being Annoying, a harry potter fanfic. I looked around the room but couldn't see anything. 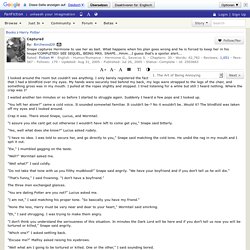 I only barely registered the fact that I had a blindfold over my eyes. My hands were securely tied behind my back, my legs were strapped to the legs of the chair, and something gross was in my mouth. I pulled at the ropes slightly and stopped. I tried listening for a while but still I heard nothing. Captured Chapter 30: Christmas Morning Reflections, a harry potter fanfic. "Get up," he hissed. 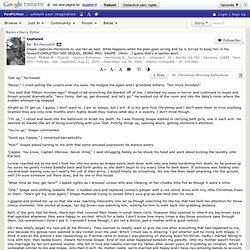 "Never," I cried pulling the covers over my eyes. He nudged me again and I grumbled bitterly. "Ten more minutes! " Latin for Sex Ed, a harry potter fanfic. So, this was a random idea. 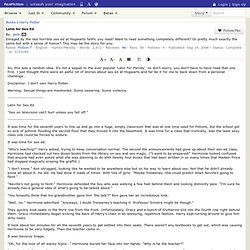 It's not a sequel to the ever popular 'Latin For Parody', so don't worry, you don't have to have read that one first. I just thought there were an awful lot of stories about sex ed at Hogwarts and far be it for me to back down from a personal challenge… Disclaimer: I don't own Harry Potter. Warning: Sexual things are mentioned. Captured Chapter 1: The Art of Being Annoying, a harry potter fanfic. Perverted Potions Chapter 8: Voyeur, a harry potter fanfic. Thanks: sexii-severus (I'm glad my writing is jsut that good!) 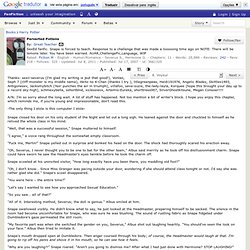 , Vonlan, Seph 7 (cliff monster is my middle name), Akito no K-Chan (thanks I try ), litlegreenpeas, Heidi191976, Angelic Bladez, Skittles1493, Antigonesev, Jacksmybitch (Yes! Punches the air in triumph), villafoo, seve-suzie, the-lady-layla, Korquee (hope this brought your day up to a record sky-high), schmexybella, sshortblnd, xoJessieox, Artemis-Eureka, shorttrees007, SilverGhostKitsune, Megan Consoer!!!! Deepest love, a harry potter fanfic. Severus snape was dreading his next lesson he had the golden trio he scowled a the thought the dark lord was dead and his life worth living as he drowned his sorrows in fire-whisky Hermione granger entered the room ... 'What do you want granger' he spat 'Well um its time for our lesson sir ' she said nervously hestatating to step forward 'Ok well may ask why you have come so early? 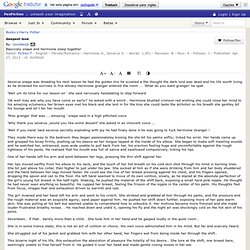 ' he asked with a smirk . Unworthy, a harry potter fanfic. She came out of nowhere; he hadn't noticed her pressed into the alcove, waiting for him to pass by on his way to the dungeons. 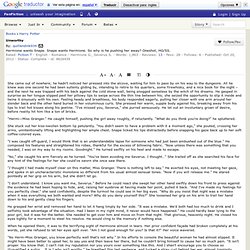 All he knew was one second he had been sullenly gliding by, intending to retire to his quarters, some firewhisky, and a nice book for the night – and the next he was trapped with his back against the cold stone wall, being snogged senseless by the witch of his dreams. He gasped in surprise as her tongue slipped past her pillowy lips to swipe across the thin line between his; she seized the opportunity to slip it inside and twine it sinuously with his own. Feeling heady and breathless, his body responded eagerly, pulling her closer with one arm around her slender back and the other hand buried in her voluminous curls. She pressed her warm, supple body against his, breaking away from his lips to trail hot kisses along his jawline. A Detention With Snape, a harry potter fanfic. Disclaimer: I do not own Harry Potter; I am just borrowing the characters for some twisted fun.

A/N: I was in the bathroom putting on makeup when I got this idea; I could write an oneshot about a detention with Snape. I know that most stories in the Snape/Hermione category start out with a detention, but this one is different. Enjoy the story (remember to review)! Dirty Moment, a harry potter fanfic. I'm redoing all my stories. Disclaimer: Duh, I don't own Harry Potter and characters. She moved to the music as hard and as fast as she could with him behind her. His hands in her hips and her back to him with her hands behind his neck. Her head was turned to the left so he could get a good view of her neck. Cucumber, a harry potter fanfic. Drabble, drabble. Disclaimer: I do not own Harry Potter. Duh. Just a small slip of a knife found Hermione clutching a now bloody forefinger.

Repeat Performance, a harry potter fanfic. "Miss Granger, if I were you, I would stay exactly where you are. Don't even breathe. " Hermione gasped. She had been walking in the school hallway, books in her arms, and without warning, she had found herself inches away from Professor Snape in a dark, abandoned corridor. Private Lesson, a harry potter fanfic. Private Lesson "Do you know how insufferable you are, Miss Granger? " Severus Snape demanded as Hermione yet again spoke out of turn in his class. "I wish to speak to you after class. " "Yes, sir," she said as she put her hand down and curled up into her chair to avoid any further notice. As the other students filed out, Professor Snape stood near the door, which he closed and locked as soon as just he and Hermione were left in the room.