The Jumper Chronicles Chapter 31: The Patronus Lesson, a Harry Potter + Sherlock Crossover fanfic. Disclaimer: I defer to Rowling and the entity known as Moftis. 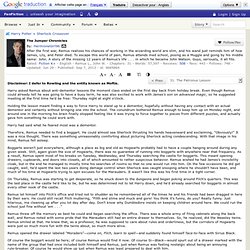 Harry asked Remus about anti-dementor lessons the moment class ended on the first day back from holiday break. Even though Remus could already tell he was going to have a busy term, he was also excited to work with James's son on advanced magic, so he suggested meeting at the first time he'd be free: Thursday night at eight o'clock. Holding the lesson meant finding a way to force Harry to stand up to a dementor, hopefully without having any contact with an actual dementor and certainly without bringing one into the school. The conundrum bothered Remus enough to keep him up on Monday night, and around one in the morning his brain finally stopped feeling like it was trying to force together to pieces from different puzzles, and actually gave him something he could work with.

Harry had said what he feared most was a dementor. Therefore, Remus needed to find a boggart. "What are you doing here? " "What's that? " Zvěromág Predator (PAUSE, pro hlavní přepsání) Zvěromág Predator kapitola 6, Aliens / Predator + Harry Potter Crossover fanfic. (Harry will be called Grimm from now on) Lex winced as her healer, non to gently pressed on her ribs. 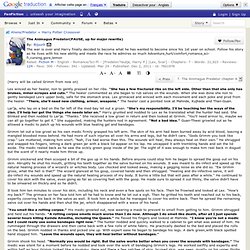 "She has a few fractured ribs on the left side. Other than that she only has bruises, minor scrapes and cuts. " The healer commented as she began to rub salves on the wounds. When she was done she non to gently bandaged Lex's upper body, safe for the stomach area. Lar'ja, who lay on a bed on the far left of the med-bay let out a groan. Grimm let out a low growl as his own medic firmly grasped his left arm. Grimm snickered and then scooped a bit of the goo up in his hands. It took him ten minutes to cover his skin, including his neck and even a few spots on his face. "You smell like a rotting corpse. " Grimm shook his head. Grimm snorted and shook his head. Black chest armor appeared on his torso, leaving only his upper arms bare. 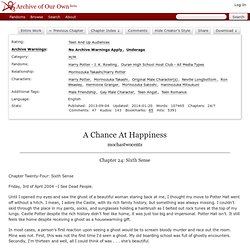 Until I opened my eyes and saw the ghost of a beautiful woman staring back at me, I thought my move to Potter Hall went off without a hitch. I mean, I adore the Castle, with its rich family history, but something was always missing. I couldn't skid through the place in my pants, socks, and sunglasses holding a hairbrush as I belted out rock tunes at the top of my lungs. In most cases, a person's first reaction upon seeing a ghost would be to scream bloody murder and race out the room. 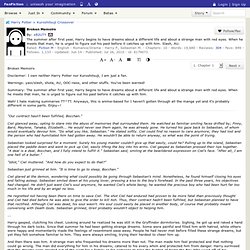 Podvádění - IHScribe - Harry Potter - JK Rowling, Chronicles of Riddick Series Pitch Black (2000) [Archiv Our Own] Riddick would have almost preferred to have been caught by the Blue-Eyed Devil. 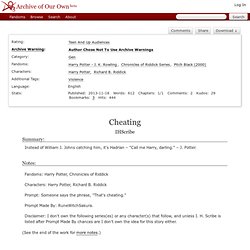 It wouldn't have been nearly as embarrassing as being caught by the crazy one. Hadrian J. Lepší, že jsme Přestávka - Kapitola 1 - Lirial89 - Harry Potter - JK Rowling, Underworld (filmy) [Archiv Our Own] 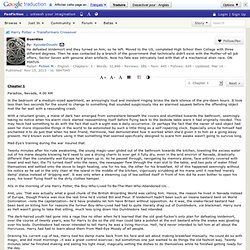 It took less than two seconds for the sound to change to something that sounded suspiciously like an alarmed squawk before the offending object met the far wall with a resounding crash. With a reluctant groan, a mane of dark hair emerged from somewhere beneath the covers and stumbled towards the bathroom, seemingly taking no notice when his alarm clock started reassembling itself before flying back to the bedside table were it had originally resided. This may have had something to do with the fact that such a sight was a daily occurrence. Mad-Eye's training during the war insured that. The Point of No Return Chapter 1: Prologue, a Harry Potter + Jurassic Park Crossover fanfic.

The Point of No Return Adopted from 'Monsters-Need-Love-Too'. 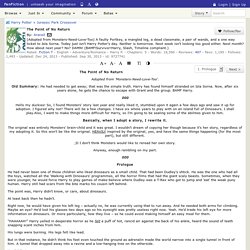 Old Summary: He had needed to get away; that was the simple truth. Harry has found himself stranded on Isla Sorna. Now, after six years alone, he gets the chance to escape with Grant and the group. BAMF Harry. Hello my duckies! Basically, when I adopt a story, I rewrite it. The original was entirely Monsters' brain-child and it was great. ;D I don't think Monsters would like to reread her own story.