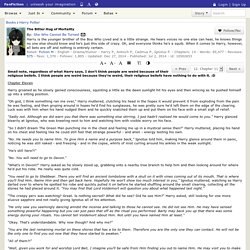 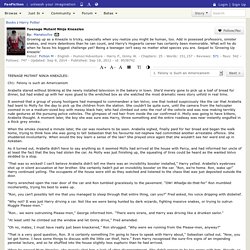 She'd merely gone to pick up a loaf of bread for dinner, but had ended up with her eyes glued to the wretched box as she watched the most dramatic news story unfold in real time. It seemed that a group of young hooligans had managed to commandeer a tan Volvo; one that looked suspiciously like the car that Arabella had leant to Molly for the day to pick up the children from the station. She couldn't be quite sure, until the camera from the helicopter zoomed in on a medium-sized boy with messy black hair, who had climbed out onto the roof of the vehicle and was now making terribly rude gestures at the pursuing police vehicles.

The glimpses of red hair from inside the car confirmed it. When the smoke cleared a minute later, the car was nowhere to be seen. Forging the Sword Chapter 15: first steps, a harry potter fanfic. Forging the Sword (Part Two):Chapter 15: First Steps Harry's words had fallen like stones into the waiting silence. 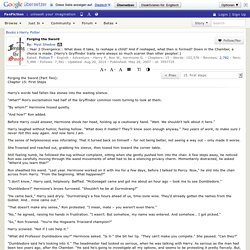 "What? " Ron's exclamation had half of the Gryffindor common room turning to look at them. "By whom? " Hermione hissed quietly. "And how? " Palimpsest Chapter 16, a harry potter fanfic. I do not own, or receive any benefits from the Harry Potter properties. 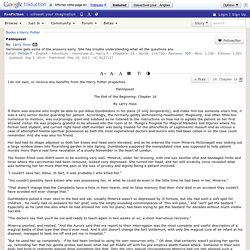 Palimpsest The End of the Beginning: Chapter 16 By Larry Huss If there was anyone who might be able to put Albus Dumbledore in his place (if only temporarily), and make him toe someone else's line, it was a very senior doctor guarding her patient. Accordingly, the normally gently domineering Headmaster, Mugwump, and other titles too numerous to mention, was surprisingly quiet and subdued as he listened to the instructions on how not to agitate the patient as her first allowed visitor. Her bed had its shape adjusted so both her knees and head were elevated, and as he entered the room Minerva McGonagall was looking out a large window down into flourishing garden in late Spring. The flower-filled view didn't seem to be working very well. Harry Potter & The Runic Affinity Chapter 8: Of Parties, Reunions and Frustrations, a harry potter fanfic. Chapter 8: Celebration Short A/N: It's been over a year. 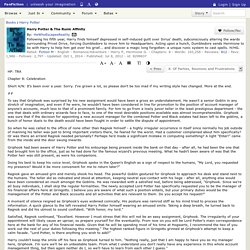 Sorry. I've grown a lot, so please don't be too mad if my writing style has changed. More at the end. To say that Griphook was surprised by his new assignment would have been a gross an understatement. So when he was called to the office of none other than Ragnok himself - a highly irregular occurrence in itself since normally his job outside of manning his teller was just to bring important visitors there, he feared for the worst.

Griphook had been aware of Harry Potter and his entourage being present inside the bank on that day - after all, he had been the one that had brought him to the office, just as he had done for the famous wizard's previous meeting. Atronach In Which Things do and don't Explode, a harry potter fanfic. Harry gleefully watched as the others raced around the magically-conjured track, panting and sweating and glaring at him and Blaise. 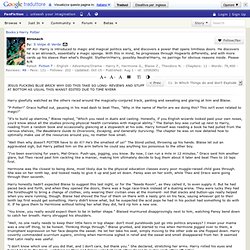 "P-Potter! " Draco huffed out, pausing in his mad dash to beat Theo, "Why in the name of Merlin are we doing this? This isn't even related to magic! " "It's to build up stamina," Blaise replied, "Which you need in duels and casting. Honestly, if you English wizards looked past your own noses, you'd know about all the studies proving physical health correlates with magical ability. " Of Magic and Skies Chapter 5, a Harry Potter + Infinite Stratos/IS<インフィニット・ストラトス> Crossover fanfic. AN: Thank you for your reviews. 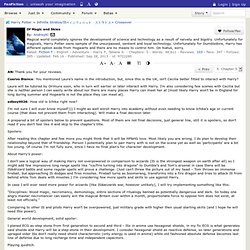 Cuervo Blanco: You mentioned Laura's name in the introduction, but, since this is the UK, isn't Cecilia better fitted to interact with Harry? Laura will be tutored by Orimura soon, who in turn will earlier or later interact with Harry. I'm also considering few scenes with Cecilia but she is neither person I can easily write about nor there are many places Harry can meet her at (most likely Harry won't be in England for long during summer and Hogwarts is not the place they can meet at). edboy4926: How old is Ichika right now? I'm not sure I will ever know myself))) I might as well enroll Harry into academy without even needing to know Ichika's age or current course (that does not prevent them from interacting).

A prepared a bit of spoilers below to prevent questions. Harry Potter the Gem Mage Chapter 8: Strength and Weakness, a harry potter fanfic. AN- Hey guys! 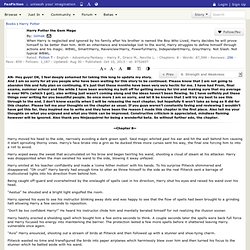 OK, I feel deeply ashamed for taking this long to update my story. And I am so sorry for all you people who have been waiting for this story to be continued. Please know that I am not going to abandon this and fully plan on continuing, it's just that these months have been very very hectic for me. I have had Prom, final exams, summer school and the while I have been working my butt off for getting money for Uni and making sure that my average is over 90% (which I got), also writing just wasn't coming along and the ideas haven't been flowing. So I have selfishly put these things over writing for you beautiful people. Harry Potter and the Zodiac Charms Chapter 22: Depths of Darkness, a harry potter fanfic. 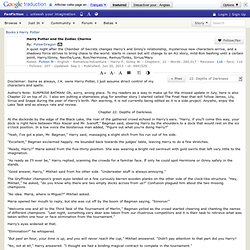 Author's Note: SURPRISE BATMAN! Oh, sorry, wrong place. To my readers as a way to make up for the missed update in July, here is also Chapter 22 on top of 21. I also am putting a shameless plug for another story I started called The Final Year that will follow James, Lily, Sirius and Snape during the year of Harry's birth. Fair warning, it is not currently being edited as it is a side project. Chapter 22: Depths of Darkness At the dockside by the edge of the Black Lake, the roar of the gathered crowd echoed in Harry's ears. Harry Potter and the Three Rules Chapter 10: The Invitation, a harry potter fanfic. If I owned Harry Potter, I would have written Hermione falling for Harry the first time, instead of realizing I'd made a mistake years later. 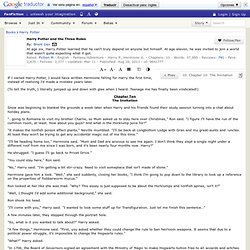 (To tell the truth, I literally jumped up and down with glee when I heard. Teenage me has finally been vindicated!) Chapter TenThe Invitation Snow was beginning to blanket the grounds a week later when Harry and his friends found their study session turning into a chat about holiday plans. "…going to Romania to visit my brother Charlie, so Mum asked us to stay here over Christmas," Ron said. "It makes the lionfish poison affect plants," Neville mumbled. Unstable Chapter 14: Lurking Menace, a harry potter fanfic. Hearing the door open, Harry looked up from the pile of sketches, books, reference cut-outs and minor knick-knacks on his table.

A gaunt figure strolled to him and without warning perched itself on the said wooden object, encrusted with stones similar in appearance to emeralds and liberally decorated with bone motived alabaster ingots. "You look like shit," the visitor told him bluntly. Harry smirked at the admission, knowing from the numbness of his face that the bags under his eyes could rival the sea over the Mariana Trench in the colour department.

"It seemed like it was a job requirement. Have you recently used a mirror? " "I'm albino, pale from birth. Industrial Magic Chapter 4, a harry potter fanfic. Harry Potter: My Way "Industrial Magic" By Heliosion. The Boy Who Wasn't Chapter 10: Owlery, a harry potter fanfic. Chapter 10 The Slytherins had gotten kicked out of the Library by Madame Pince at 8pm sharp, along with a couple of other students, due to it closing. Thankfully, their letters had dried completely, so the three didn't complain about having to leave, seeing as they were already going to without being prompted. Even at this time of night, the corridors were surprisingly brightly lit. A few paintings paused what they were doing to observe the three first years as they passed.

"Anyone actually know where the Owlery is? " Harry Potter and the Elemental Changes Chapter 41: This is THEIR house!, a harry potter fanfic. Hello readers! I have surprisingly little to say. The story crawls on at its own pace, and will continue to do so for the foreseeable future. I am well. Germany won the World Cup (Called it!) And we made Quarter finals so that's all nice. Thanks to my beta, MsCalypso. Thank YOU for following, favoriting and ESPECIALLY for reviewing. A Shadowed Soul Chapter 18:Flashback-Capturing a Shadow, a harry potter fanfic. Oh snap! Bet you never expected to hear from me again! Yup, I'm thinking about taking up the story again. It still baffles me how many reviews i get every week, despite not having updated this story in FOREVER (srsly, sorry about that lol).

Full "new" chapter to follow whenever I can eke out enough time. The Handbook of Elf Psychology Chapter 13: Wherein Harry Stipulates Terms, a harry potter fanfic. "I don't think I quite understand," Draco said, frowning. Heirs of the Founders Chapter 12, a harry potter fanfic. Heirs of the Founders. Liberi De Luna Chapter 18: Midnight Duels and Three-Headed Dogs, a harry potter fanfic. Midnight Duels and Three Headed Dogs "Seeker? " Have Chrome, Will Travel Chapter 33, a harry potter fanfic. Sorry for being a week late but some things came up... Lets just say it was a long few days. What is in a Soul Chapter 6: The Ritual. Harry appeared out of thin air, and immediately fell down on the dusty floor of the secret passage. Time-travel had never felt so rough before, but then, he'd never travelled back for more than two days before this. He sat still for a few minutes; feeling too sick and dizzy to move.

He forced himself to move after a while, and started the half-hour trek down the passage to get out of the range of Hogwart's wards. The passage looked no different to when he had used it last, six years in the future. Extracurricular activities : year 6 complete Chapter 1: Default Chapter. Disclaimer: I don't own anything except some of the story. This is the second story in my series. If you just arrived here, you may want to read year 5 first so you have some background. It is called Growing up too fast. Reading - Harry Potter and the Path to Greatness Chapter 19: End of First Year, part 3, a harry potter fanfic.